As colleges weigh the importance of free speech and the need for safe environments, WSU's Trump Wall demonstration went as administrators had hoped 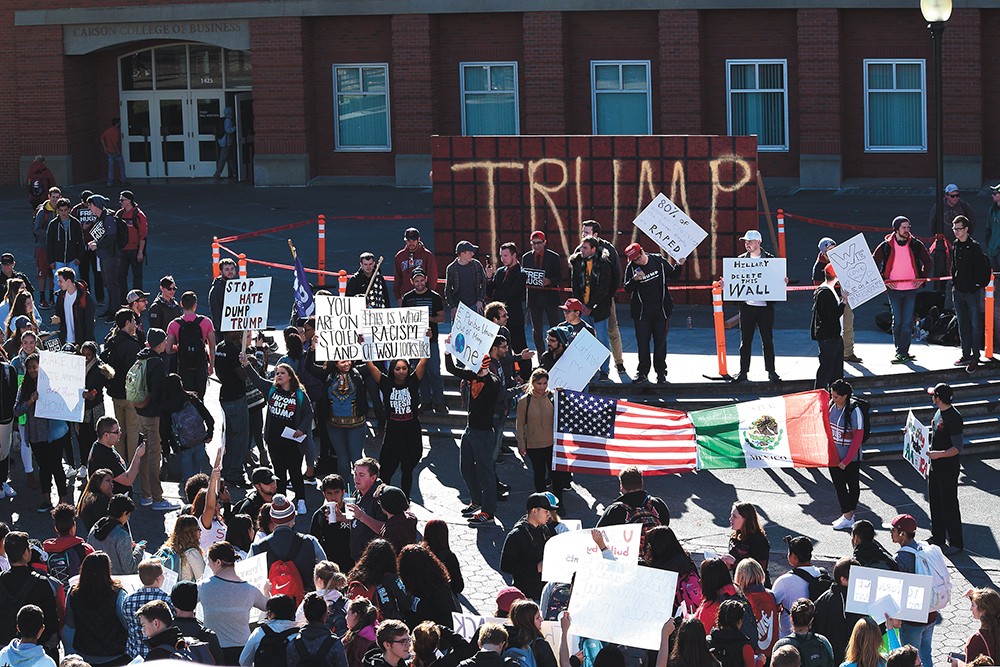 In the middle of Washington State University's campus last week,

red caution tape encircled an 8-foot-tall wall with "TRUMP" spray-painted on it. About a dozen college-age men stood near the wall inside the tape, supporting Donald Trump's presidential campaign — more specifically, his idea to build a wall across the U.S.-Mexican border to keep out illegal immigrants.

A crowd of more than 100 protesters gathered in opposition to the Trump Wall on the other side of the tape. They held signs that said "This is What Racism at WSU Looks Like," "Stop Hate Dump Trump," and other messages not as suitable for print in this newspaper.

On both sides of the red tape, those who attended the demonstration seemed to be in agreement that such an event gives them the chance to discuss their viewpoints in a constructive way, even if many students — including undocumented citizens attending the school — felt personally offended. And it's an event that the university itself supported, without necessarily supporting the message of the Trump Wall itself.

But at WSU, just as with other colleges across the nation, balancing free speech rights while heeding student demands to shield campuses from potentially offensive language has required careful consideration from administrators. It's an issue that's become even more prominent this election cycle. The Trump campaign has actively opposed "politically correct" language, while people on the other side feel his campaign has elevated racist, sexist and xenophobic platforms, including his proposal to build a wall across the Mexican border. It can put colleges in a tough position: Either fully support the right of students to express viewpoints on campus that may offend or alienate a portion of the student population, or protect students who feel harassed, bullied or discriminated against because of those viewpoints.

With the Trump Wall, WSU decided to give students a chance to express themselves.

"It's protected by free speech," says James Allsup, organizer of the wall and president of WSU College Republicans. "We're just saying that we need to have strong policies to protect our border in this country, that's all we're saying. I understand that it's personal for a lot of people. But at the same time, we shouldn't have to censor our policy positions because it might hurt somebody's feelings."

Taehlor Crim, Murrow News Service
Not everyone on hand was pro-Trump Wall.

Weeks before the Trump Wall went up at WSU, a student found "TRUMP 2016" written underneath the N-word in the school library. The student who found the writing, Haniyyah Dixon, told the Inlander in September that she felt the school allowing WSU College Republicans to build the Trump Wall implied support for racist messages like the one she found. WSU President Kirk Schulz made sure the writing was erased and said it did not represent the "inclusive and diverse environment" the school strives for.

For some college students, however, even the words "Trump 2016" are offensive. When somebody wrote "Trump 2016" in colored chalk on the campus of Emory University, a private college in Atlanta, a group of students protested. Trump's rhetoric was so divisive, the students felt, that promoting him as a candidate also promoted hate and discrimination.

In both WSU and Emory's cases, the graffiti was removed. More surprising, perhaps, neither school directly cited the message itself as the reason for its removal. Instead, it was deemed destruction or defacing of property.

Joe Cohn, legislative and policy director for free-speech watchdog Foundation for Individual Rights in Education (FIRE), says it's dangerous to regulate support of a candidate in colleges, regardless of the message.

"I think that Trump's candidacy has clearly hit a nerve with a lot of people," he says. "But the key is that we don't censor political opponents on either side of the aisle, no matter how extreme they're perceived to be. When we start getting into that kind of activity, that's really problematic."

WSU Dean of Students Melynda Huskey says the school can't regulate content of speech unless it makes a distinct threat to a person. Someone could stand in the middle of campus holding a sign with the N-word written on it, and the school couldn't do much other than encouraging people to be thoughtful or speak up and reject the message.

Students across the country have called for increased regulation of that kind of behavior. According to a 2016 Gallup survey, 69 percent of students said colleges should have policies against slurs and intentionally offensive language. At Western Washington University, in perhaps the most extreme example of students calling on administrators to regulate speech, a group of students made a series of demands during the last school year, including that administrators create a new college dedicated to social justice, and create a student-led committee to police offensive speech.

Yet the same Gallup poll found that more than half of students feel their campus prevents them from saying things they actually believe "because others might find them offensive."

"It's just a very complicated topic, and a lot of balancing has to go on," Huskey says.

Cohn, with FIRE, says the two most common ways that schools infringe on free speech rights are through anti-harassment policies written so broadly that they include protected speech, and by quarantining speech into "free speech zones."

Private colleges can be more restrictive, and Cohn says that students should be more aware of that before attending those schools. At Gonzaga University, for example, there are a series of standards required before granting permission to invite a guest speaker, or to host an event for the public on campus. Though the policy says the university community "must be free to engage the full range of views on a variety of subjects," the policy also says the speech or event should not create a "hostile learning environment." That sort of language can be troubling, Cohn says, because all sorts of things can fit into that definition, such as, perhaps, a Trump Wall (something Gonzaga College Republicans have no plans to build).

"I think you'd be surprised at how well people can really handle the free exchange of ideas and disagreement when they're allowed to, and when they're treated like other adults off campus are treated," Cohn says.

When Kirk Schulz took the job as WSU president, he described to the Inlander his vision for a safe environment on campus and what free speech should look like. Students from any walk of life should feel supported, he said. But there has to be an environment where people can express divergent viewpoints without violence.

"If I don't work to create that environment with our campuses, if I don't start there, it's never going to permeate throughout the rest of our organization," Schulz said.

The day before the Trump Wall demonstration, Schulz, Huskey and Executive Vice President Dan Bernardo sent a letter to students, expressing that support.

"Protecting the free exchange of ideas while encouraging dialogue that is constructive, respectful and civil is one of the university's core values," the letter says.

During the demonstration, people protesting the Trump Wall could be seen engaging in conversation with Trump supporters across the red tape. One person, who was not a student, held a Trump flag in the middle of the protesters and recorded the scene with his phone before a student twice knocked his phone out of his hands.

But most of the conversations were civil. A giant beach ball called the "free speech" ball rolled around the crowd, covered in vulgar writing. One guy wore a Statue of Liberty costume. Another played "America the Beautiful" on his violin.

The people who personally felt offended by the wall still welcomed the opportunity to express themselves. Keyla Palominos, an undocumented citizen and WSU student, was among the protesters. Palominos, who has lived in the U.S. since she was 6 years old, says it saddened her to see a Trump Wall on campus. At the same time, she said it was the students' right to erect the wall.

"We all have to get our point across in order to understand each other's perspectives," Palominos says. "Because if we don't do that, if you don't tell me your perspective, I cannot argue against you, or fight you. It's like trying to make food, and not really knowing a recipe."♦