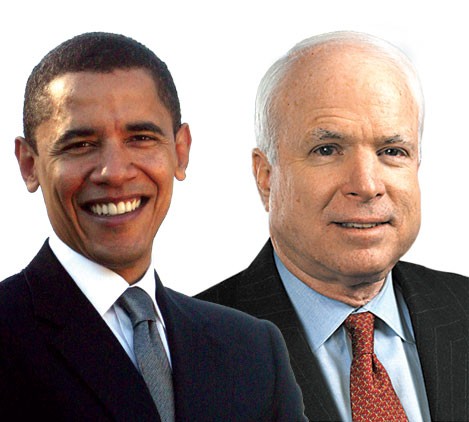 Comparing the plans Obama and McCain have for health care

It’s been 15 years since the nation took a whack at fixing its health care system, and that attempt was pretty much dead on arrival. Now both Barack Obama and John McCain are promising to address the issue if elected, and it’s none too soon, as the cracks in the system are only getting bigger. While there are 47 million uninsured Americans, the Kaiser Family Foundation has highlighted another troubled group in a recent study: people who have health insurance yet still can’t pay their medical bills. The number of people in this category has gone from 16 million in 2003 to 25 million in 2007. That new “uninsured/underinsured” demographic now makes up 75 million working adults — 42 percent of the United States’ workforce.

McCain and Obama agree on some things: Both want to work their reforms within the existing system of private insurance, and both want to cut the number of uninsured; neither advocate forced universal health coverage. And, in keeping with the spirit of every election season, they’re both vague on how to pay for it all.

For more details on the candidates’ health plans, check out www.johnmccain.com or www.barackobama.com.

In His Own Words: “We now face an opportunity — and an obligation — to turn the page on the failed politics of yesterday’s health care debates… My plan begins by covering every American. If you already have health insurance, the only thing that will change for you under this plan is the amount of money you will spend on premiums. That will be less. If you are one of the 45 million Americans who don’t have health insurance, you will have it after this plan becomes law. No one will be turned away because of a preexisting condition or illness.” (May 2007)

What Critics Say: “Senator Obama chose not to… [be] in favor of universal health care, which I find astonishing. And for the life of me, I don’t think it’s the smart position for a Democrat or a progressive to take. I think it’s imperative that we stand for universal health care… But if you don’t even try, you’re ceding the ground to the health insurance companies, the drug companies, the Republicans…” (Hillary Clinton, February 2008)

Keeping Costs Down: Obama would rescind the federal rule that prevents the federal government from negotiating better bulk prices with drug companies. Obama also supports a $10 billion, five-year plan to update the nation’s electronic health care infrastructure to make records more portable and to cut down on paperwork.

Covering the Uninsured: While not mandating universal coverage as Hillary Clinton proposed, Obama would create a new low-cost national health plan people could buy into. No one would be forced to join, but over time, with incentives, Obama hopes the number of uninsured will shrink. He would, however, require that all children have health care coverage.

The System: Obama would put more federal regulations on the insurance industry, including forcing them to cover mental health and not allowing them to deny coverage over pre-existing conditions. Employers who do not cover their employees would have to pay into the national system. Businesses that do offer coverage will be eligible for tax credits.

Obama on McCain-care: “Instead of offering a comprehensive plan to cover all Americans and control rising costs, he’s offering a tax cut that doesn’t even amount to half of the cost of an average family health care plan, and won’t make health care affordable for the hardworking Americans who need help most.” (June 2008)

In His Own Words: “We can build a health care system that is more responsive to our needs and is delivered to more people at lower cost. The ‘solution,’ my friends, isn’t a one-size-fits-all, big-government takeover of health care. It resides where every important social advance has always resided — with the American people themselves, with well-informed American families making practical decisions to address their imperatives for better health and more secure prosperity.” (October 2007)

What Critics Say: “Neither one of us would be covered by his health policy.” (Elizabeth Edwards, March 2008, commenting on how McCain’s plan would not require insurance companies to cover patients with pre-existing conditions. Both Edwards and McCain are cancer survivors.)

Keeping Costs Down: McCain would allow prescription drugs to be re-imported from Canada to get the price down, along with hurrying drugs to generic status sooner. He also supports medical liability reform, which would limit medical lawsuits. McCain advocates reforming the way Medicare and Medicaid operate, including encouraging prevention and, while tricky to implement, denying payment on medical errors or mismanagement.

Covering the Uninsured: McCain puts the onus on individuals to buy health insurance, but he would assist them by offering new tax credits — $2,500 per year for individuals and $5,000 for families — that would make it more affordable. Greater consumer choice and competition would, McCain hopes, cut the cost of health care and encourage more people to buy insurance. McCain would also expand federal Health Savings Account programs that allow families to put away money, tax-free, specifically for future health costs.

The System: McCain would move the nation away from an employer-based insurance system by offering individuals incentives to seek insurance on their own. He would also deregulate the insurance industry to foster greater competition and allow families to be able to buy insurance from a variety of firms. His plan aims to improve efficiency to keep costs under control. The option of employer-based coverage would continue, however.

McCain on Obama-care: “My friends, we’ve seen this movie before. It was called ‘HillaryCare’ back in 1993, and we’re not going to do it again. We’re not going to have the government take over the health care system in America.” (July 2008)