The Round at the Bartlett brings artists, poets and musicians together on stage 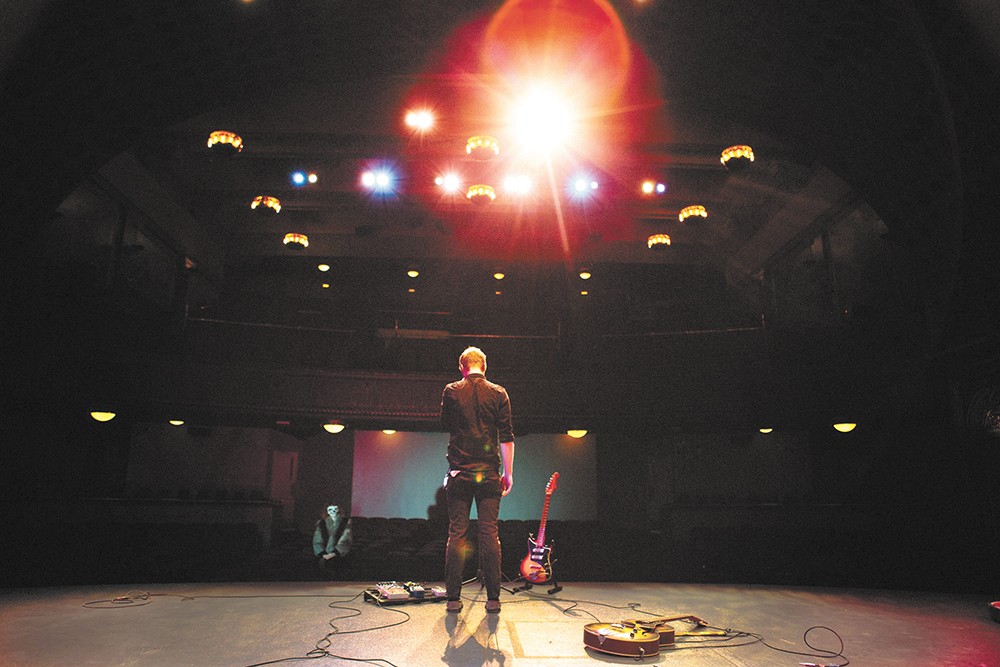 Musicans like Kent Ueland team up with visual artists, poets and more at the Round.

Wearing white coveralls, the image of an airplane embellishing the back,

Isaac Grambo grabs the microphone. Known in Spokane for his role in reviving the spoken word poetry scene, Grambo hasn't painted since 2008 and is so nervous that he keeps dropping his brush.

"When Mark Anderson contacted me, my one condition was that I got to talk," says Grambo.

Last October, Karli Ingersoll, who owns the Bartlett with her husband, teamed up with Anderson, a local poet, to bring the Round to Spokane. The monthly multimedia performance has its roots in Seattle and now has incarnations in a number of cities, including Portland; Lebanon, Pennsylvania; Austin, Texas, and now, Spokane.

Three songwriters and a spoken word poet alternate performing while a visual artist creates a piece of art live in front of the audience. The songwriters banter onstage and collaborate by adding harmonies, guitar, harmonica to other performers' pieces. The spoken word artist introduces her poems with humble charm. But until tonight, the visual artist has never taken the mic.

It's just like Grambo to be the first painter to do so, says Anderson. He had never thought to ask the visual artist to let the audience into his process, but imagines that the custom will continue, a tangible example of the mark each artist leaves on the Round.

This Saturday, Oct. 24, marks the beginning of the Bartlett's second year hosting the Round. Both Anderson and Ingersoll will be performing, along with featured musician Courtney Marie Andrews as well as Kent Ueland and John Merrell.

"One of my favorite things is to be someone's first experience with a medium," says Anderson. "[The Round] challenges you to be engaging in a different way, because your audience isn't just there for poetry." 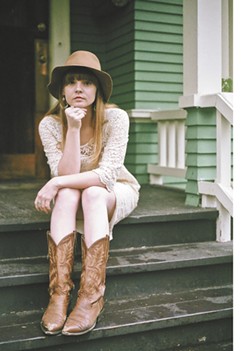 For Ingersoll, that's what makes the Round worth mentioning. Audience members may be poetry enthusiasts or music fanatics, but they all come together at the Round to experience different art forms.

"It's a really communal event; it feels like you're in a living room," says Ingersoll.

When choosing artists for the Round, Ingersoll tries to get one performer confirmed, then brainstorms ideas for second and third musicians, based on that performer.

"Sometimes I think about contrast. If the artist is kind of folky or has a pretty or sweet type of aesthetic to their music, I think of what would complement or contrast that, because you could go either way," she says. "Sometimes I like to throw in someone with an opposite personality, just to see what happens."

For both Ingersoll and Anderson, the interaction between the artists is the best part of the Round; as Ingersoll says, it's the only time that interaction will ever exist.

Anderson recalls a moment of collaboration between songwriter Cami Bradley and Portland poet Doc Luben. Bradley had finished a song that connected to a personal theme of Luben's, which he hadn't mentioned beforehand. He chose a poem inspired by her song, and at the end she improvised by playing the chords of her song to accompany his poem.

"It's definitely a show for the curious, because you get a little taste of a lot of things," says Anderson.

As the Round continues into its second year, Ingersoll hopes to see the audience continue to grow in order to pay the artists more, and be able to bring in bigger artists:

"I think if it continues to be well supported, it just shows that people are searching out art experiences. Each time we put the lineup out, several of the artists are not super well-known. They have to come in trusting that it's going to be something worth their time, and it already shows that people are open and trusting of that." ♦