Young Kwak photo
The state-run prison is home to hundreds of inmates with COVID-19.

While officials focused on the threat that Thanksgiving gatherings could add to already spiking COVID-19 cases, a huge Inland Northwest outbreak was already starting among people who aren't in control of their meals or gatherings: inmates.

By the first week of December, it was clear that the virus had started spreading at Airway Heights Corrections Center, a prison run by the state Department of Corrections. Soon after, the Spokane County-run Geiger Corrections Center also had to create a quarantine unit for its own outbreak.

Within days, the number of positive cases exploded.

While officials had only reported seven cases at the state prison from the start of the pandemic to Thanksgiving week, by Friday, Dec. 11, there were 792 cumulative cases and 1,535 inmates in the main facility. (Another 365 are housed in a separate minimum security building.) By Monday, Dec. 14, there were 869 cumulative cases.

The outbreaks are testing the ability to handle social distancing, isolation, quarantine and constitutional rights in spaces designed for confinement. Inmates have dealt with limited showers, moving from building to building, and in some cases difficulty reaching their families or using free phones set up to contact their attorneys.

While it's unclear what started either outbreak, inmates at Geiger were concerned that some officers' refusal to wear masks before the outbreak could have brought the virus in. At least three inmates confirmed that officers on their floor sometimes did not wear masks until after the current outbreak started.

Bjorn Manycolors, who was booked into Geiger in June on possession of controlled substances, says he remembers that there was a potential scare three or four months ago after someone was transferred away and tested positive. He recalls guards wearing masks more often and more sanitation protocols, but says the measures quickly relaxed when no outbreak happened.

"It made me see they don't learn from anything, they act like it's a surprise every time," Manycolors says. "They only just started wearing masks."

While Sparber says the virus may have come from someone going to court, talking to a loved one or from staff, he confirms that although a mask requirement for staff interacting with inmates was in place before the outbreak, a clearer policy was sent to staff after the current "onslaught."

"On the onslaught of this, we of course mandated everyone to wear the mask, including our inmate population that we're providing masks for," Sparber says.

For those inside who got sick and are now stuck in quarantine units, it's been frustrating and scary as they get conflicting answers from the people in charge and feel mistreated. For their families, who sometimes go days without hearing from them, it's been just as nerve-wracking.

"I feel like we are not being treated fair or with care," writes Miguel Reyes from the state prison in Airway Heights. As of Dec. 10, he says he hadn't had a shower in four days. "I may have made a mistake, but I'm still human!" 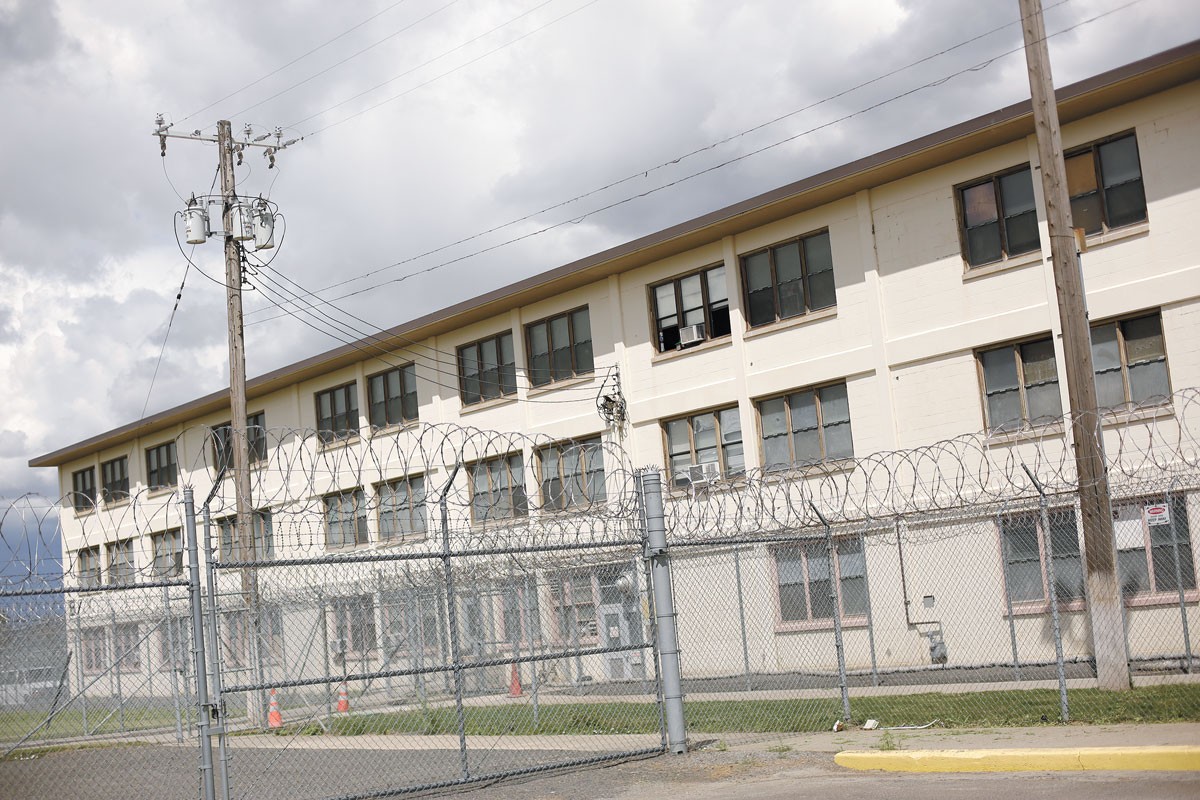 Not everyone in jail has been convicted or committed violent crime.


For Tommy Davis, it was an old DUI for which he'd never finished treatment classes that landed him at Geiger this fall.

Davis' girlfriend, Danielle Schafer, says that about a month before he had wrapped up his requirements for that DUI about four years ago, Davis had his heart broken. He took off to Alaska where he lived off-grid for a few years, she says. But this summer he returned to Spokane with the intent to clear out that old case, even letting his employer here know that's what he was doing, she says.

"He was out with his friend only a few days after he got here and she got pulled over, and they asked for his ID," Schafer says. "They took him in."

He got bailed out and a court date was set, but due to COVID, his court dates were pushed back repeatedly. One date was then moved earlier again, Schafer says, but Davis never got the letter and later confirmed with the county clerk's office that the mail was returned as undeliverable. However, since he had failed to appear, he was booked into jail again. Despite getting an attorney and signing up for the class he'd nearly finished before leaving years ago, a judge found him to be a flight risk and sentenced him to more than 200 days.

"The judge just threw the book at him," Schafer says.

After being booked into Geiger this September, Davis quickly completed another alcohol course inside the jail. He was set to have another hearing around Thanksgiving, but that was postponed, says his sister Carma Blalock.

"He potentially could have been released before he contracted the virus," Blalock says.

By Dec. 5, he'd tested positive for COVID, along with many other inmates who were moved together into a floor of the "A" building at Geiger.

Manycolors, another inmate who tested positive and has been staying in the quarantine area, says that it wasn't until several days after someone first reported feeling sick at Geiger that he and others were taken to the downtown jail to be tested. After first being locked down for about four days without showers, they were transferred and housed in an isolation unit downtown for another four days while everyone was tested. Then they were returned to Geiger, put on the same floor, and told they had COVID.

Several inmates asked if they could see their test results, and Manycolors says they were later handed pieces of paper without any names or identifying information that said "you tested positive on Dec. 2."

"It's like a pacifier so we stop asking questions," says Manycolors, who expressed frustration at the conflicting information they continue to receive from the officers who work with them as policies seem to keep changing to deal with the outbreak.

There were about 50 people on the isolation floor where positive inmates were staying when he spoke to the Inlander on Dec. 10. Throughout the pandemic, inmates have slept two to a cell instead of four as usual, but they've been back to full cells of four in that unit, he says.

"They say after 14 days we're all off quarantine, but we'll probably all be on this floor for a long time," he says. "The easiest thing to do would be leave us here."

He says that the free phones used to contact attorneys are on another floor that they're not allowed to go to because they're COVID positive. They often wait for more than an hour to use the phones on their floor, which require payment by either inmates or the person answering a call, and a new phone system installed last week has complicated things further.

"It is extremely hard to get ahold of attorneys from the phones on our floor," Manycolors says. "A lot of times attorneys aren't in the office so it's hard to catch them at work, or they're in court so you can't get ahold of them, and now you can't leave voicemails anymore under the new system."

Meanwhile, his mother, Cynthia Manycolors, was among other family members who told the Inlander they've struggled to get information about the outbreak while their loved one was being moved around. Without consent forms on file to share HIPAA-protected health information, relatives were told they couldn't learn anything about their incarcerated loved one's status.

"It was very frustrating and concerning," Cynthia Manycolors says.

The outbreaks at both facilities are massive, affecting about 57 percent of the inmate population at each so far, but the situation at the Airway Heights prison is particularly large considering the sheer number of people affected.


Multiple spokespeople for the Department of Corrections did not make time for an interview, but answered some written questions. When asked whether the facility could effectively prevent the spread at this point, with so many affected inmates, a spokesperson noted that social distancing is being encouraged within the facility as they address the current outbreak.

"Airway Heights Corrections Center has established multiple alternative housing areas within the facility to safely house COVID-19-positive incarcerated individuals separately from healthy individuals," writes Rachel Ericson, a deputy communications director. "The gym/rec building is one of the alternative housing areas, this area has cots, provided by the Red Cross, shower and bathroom capabilities and handheld phones for incarcerated individuals to call their loved ones."

At Geiger, the first known case of COVID reported to the Spokane Regional Health District involved an inmate. At the state facility, where things started is not known.

"The start of the outbreak is speculative," Ericson writes. "The Department of Corrections is focused on mitigating and ceasing the spread of the outbreak."

Reyes, the state inmate who wrote that he hadn't showered in a few days last week, says they were told some chemical dependency counselors, who offer classes to inmates, had tested positive for COVID. But he and others who'd been exposed to them before those positive tests were not immediately taken for testing themselves.

"[The Department of Corrections] did absolutely nothing that I have knowledge of to prevent further spread at that time," Reyes writes. "We were still attending 'morning meetings' which are meeting[s] for 30 to 40 people seated in rows."

Reyes says he was told that if he didn't want to be exposed, he could be removed from the meetings, and he and others mentioned multiple times they thought the governor's restrictions on gatherings of that size applied to them.

"But we were told prisons don't need to follow the shutdown protocols," Reyes writes.

He initially tested negative for the virus, but then later became sick, and describes hearing others struggling as they coughed through the night. He says he was told on Dec. 7 that they'd be moved according to their test results. When he expressed concerns about being placed with someone who wasn't sick, because by that point he had symptoms and his results were a week old, he says he was told not to worry.

"They told me word for word if [you] tested negative you cannot get anyone sick," Reyes writes. "This has been one of the most intensely traumatic [experiences] of my life ... they have failed us all in ways that are unimaginable and have [led] me to believe [their] intentions were and are to allow and facilitate the spread of Covid 19 through the entire population." ♦