Slip out of your suit and become a chameleon of war. 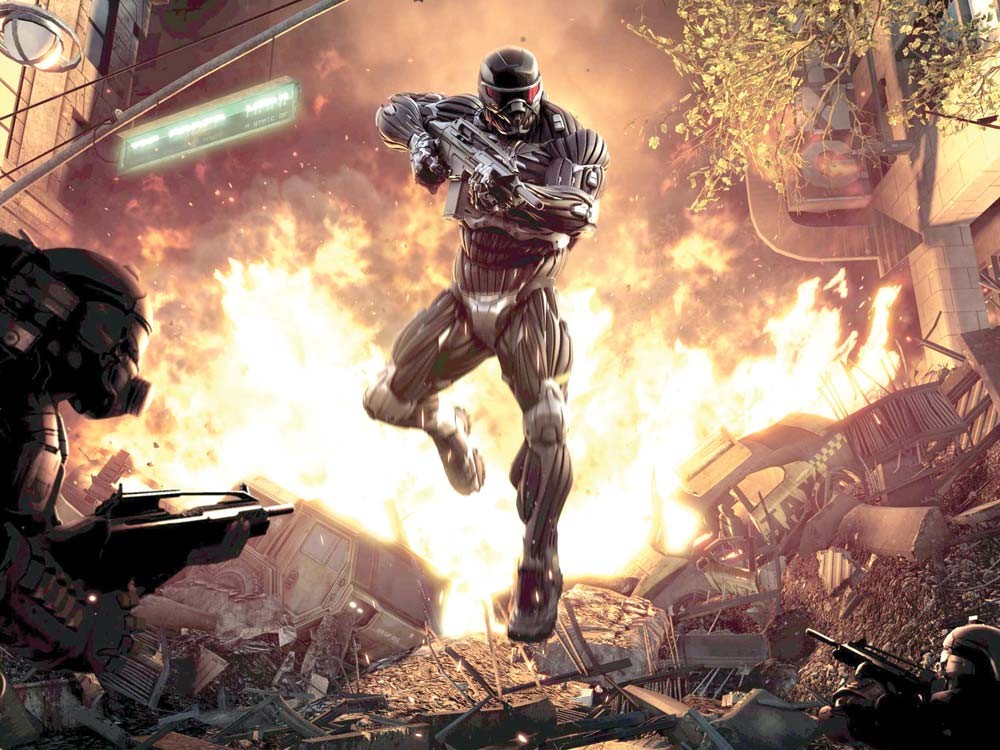 Aliens? No biggie. We've got some badass supersuits!

The aliens attacked while I was on a submarine. My Marine squad was getting ready to go into New York City when the ship started shaking. Walls collapsed. Electronic equipment exploded. Along with most of my squad, I swam out of the escape hatch and surfaced in a nightmare. Smoke billowed from the Statue of Liberty — the victim of some kind of attack. The skyline was ragged and burning. And above us, a ship bigger than any aircraft on earth swooped in and attacked while we bobbed in New York Harbor.

The next thing I remember, I woke up wearing a new suit. (I’m a little weirded out about that — I like to change my own clothes.) Now everybody hates me — the aliens, the soldiers, even the diseased humans. I’ve heard that “the clothes make the man,” but this suit has made me everybody’s enemy.

Not that I can’t handle it. The suit has formed a symbiotic link with me, and it’s making me stronger than before. With the click of a button the suit grows microscopic plates of armor, making me as strong (and as slow) as a tank. Another click of a button and I’m camouflaged by invisibility. When bullets are fired at me, my suit tracks their trajectories as little blue lines flowing through the air. My enemies appear like little radar dots on a map inside the visor of my helmet. I can run extremely fast, kick cars and jump very high.

But I’ve done all that before. I’ve played videogames for years. Almost everything in Crysis 2 can be found in other games. And after the superhuman feats that I’ve achieved in games like inFamous and Just Cause 2, the “special features” in Crysis 2 feel tame and predictable. It’s a little disappointing to be expected to save the earth without being granted a few unique superhuman powers.

However, what I find myself doing in Crysis 2, more than in other save-the-world shooters, is switching between my various abilities. The game blends stealth, gunfights, close combat and exploration in a rapid fire sequence across large, sprawling levels that change during each battle as vehicles move, cover is destroyed and enemies reorganize. What Crysis 2 does better than most games is make me change my skin, transforming me into a chameleon of war.

THE GOOD: Crysis 2 is spectacularly lit. I’m often able to see my enemies coming around corners by watching their shadows creep along the ground. And while my own shadow doesn’t always appear — a common problem in first-person shooters — I find it following me around more often than not.

THE BAD: Humans and aliens are equally stupid. They often don’t notice when I’m standing next to them. And when I’ve backed into a squad of soldiers, they politely move away from me before resuming their attacks. I don’t really like shooting people in the back, but if they don’t want to do it first, then I guess I’ll take the opportunity.

THE BOTTOM LINE: In Crysis 2, familiar shooter features flow together at a furious, fast pace.