Among the burnt butts near Worley, Idaho. 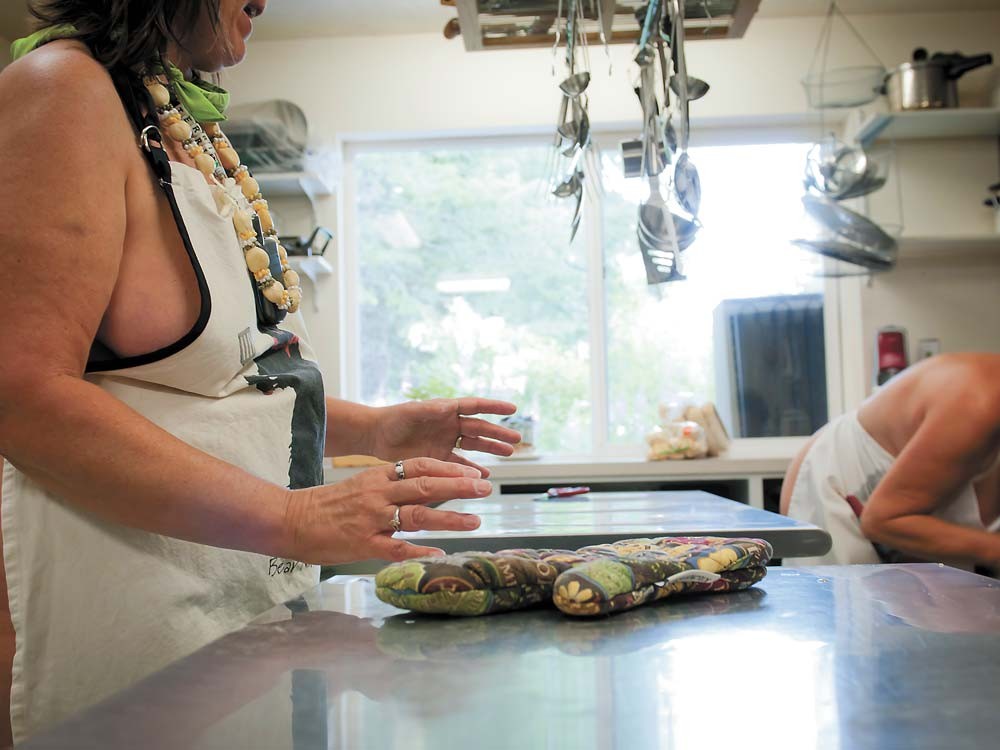 Amy Hunter
Aprons are allowed for the cooks in the kitchen at Sun Meadow Resort.

A mountain of a man in combat boots is perched at the wheel of a golf cart. Thick black hair swirls across his arms, chest and wraps around his back, making his big toothy smile seem bigger — almost brighter — in the sunlight.

Aside from the boots, he’s buck naked.

In a flash, wandering eyes can judge whether he’s circumcised (he is), carries a spare tire around his middle (he does), prefers to shave his genitals (he does not), or if he’s wearing a wedding ring (nope).

But here, well-aside from marital status, none of that really matters.

“We’ve got all shapes and sizes of construction workers, farmers, bankers, attorneys, doctors and lawyers,” says Kathy Smith, 62, discussing the membership at Sun Meadow Nudist Resort in Worley, Idaho. “We’ve got everyone from newborns up to people in their 90s.”

Worley is a one-horse-town surrounded by wheat fields. But past the grain silos, retro cafes and auto shops is Sun Meadow Resort and Sun Meadow Estates — an oasis for nudists and their families. Earlier this month, during a regional convention for the American Association for Nude Recreation (AANR), more than 200 men, women and children frolicked naked in the sun here.

“AANR is the credible voice of nude recreation,” says Smith, who is president of the Northwest region.

Smith says the national organization advocates for nude recreation in appropriate settings. They serve more than 260 nudist resorts and affiliates in North America.

The Northwest region includes 18 nudist clubs — including Sun Meadow and Kaniksu Ranch in Loon Lake — throughout Alaska, Washington, Oregon, Idaho and Montana. The convention featured workshops on everything from skin cancer to tie-dying. People swam, played bocce ball, tennis, and volleyball in the nude.

During the convention, in one corner of the private, 75-acre resort, a sunburnt man with a very sunburnt penis sits inside the events center, lazily checking his email. Campers set up tents, hooked up motor homes, and parked Volkswagen camper vans throughout the woods and wandering meadows.

Children in diapers crawl atop the playground and little girls chase after each other in nothing but flip-flops. Men drink Tecate lounging in lawn chairs, and women cook ribs in the kitchen. Men with large rods pierced through their genitals and women with long caesarean-section scars sit and enjoy the sunny afternoon together.

The whole place feels sort of like a country club, without all the pretense of affluence and status, which many members say is the primary reason that they enjoy social nudism.

“In here, you’re accepted for who you are,” Smith says. “You as a person. Not your clothes, not your jewelry, not your job, not how rich or how poor you are.”

“Because none of that shows when you’re nude,” chimes in her husband, Dave, 63. The couple wears matching cowboy hats littered with nudist resort pins and badges from the Bare Buns Fun Run, a naked race the couple organizes each year at the Ranch.

The couple says that the vulnerability that comes with being naked enables humans to connect with one another on a different, more intimate level.

And it’s not about sex. In fact, lewd activity and behavior are grounds for expulsion at this family resort.

A gold cross rests in Dave Smith’s silvery chest hair and an amethyst necklace dangles between his wife’s breasts. The couple met each other later in life at Kaniksu Ranch following previous marriages, families and divorces. They’ve been married for six years and have been nudists for more than 16.

Kathy works in retail and Dave is a licensed mental-health counselor. Their friends, family, neighbors and employers know about their lifestyle. Sometimes they take their grandchildren to the ranch on weekends, but they understand if they don’t choose to participate.

The couple say they are nudists because of the acceptance, the safety and the community.
“It’s not a religion, and it’s not a colony,” Dave says. “It’s a lifestyle.”

But it’s a lifestyle plagued with secrecy, and unlike the Smiths, some members are unwilling to reveal their identities. One member of Sun Meadow says that, because of his work with at-risk youth, nudism remains a very private facet of his life.

“I long for the day when I can be open about my lifestyle,” he says. “You’ll find that most people don’t talk about coming here. … They’re teachers, pastors, or policemen, and this world can be easily misunderstood.”

He says the fear factor of outing oneself as a nudist is typically greater than the actual repercussions. He believes that if more nudists exposed themselves (pun intended), there wouldn’t be such a stigma associated with the lifestyle.

That’s precisely why members of Sun Meadow have joined the Coeur d’Alene Chamber of Commerce. Sun Meadow hosts large public events and participates in tourism conferences. Organizers are even taking marketing classes to become part of the greater social fabric.

And it’s not because they believe pubic nudism will one day be socially acceptable. They simply hope to protect their lifestyle by gaining exposure.

“Our goal is to provide people with an opportunity that they won’t get anywhere else,” he says. “It’s an oasis. It’s a safe place for people to experience a freedom they never imagined was even possible.”