On the Spokane set of Z Nation, talented makeup artists create both horror and beauty 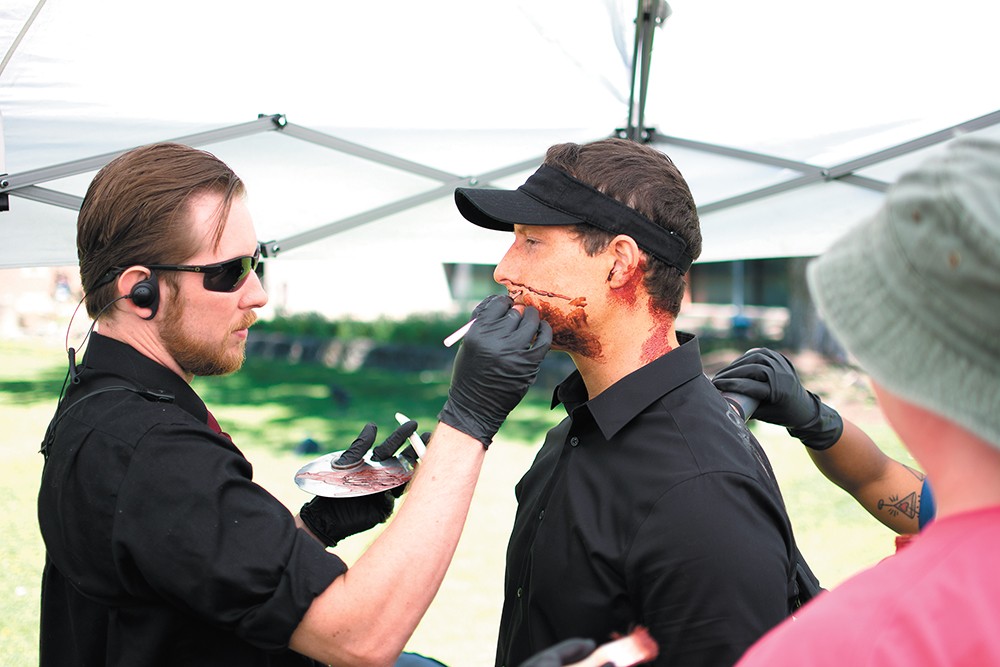 Stuart Danford
Logan Tobia, left, is the head of the makeup department for Z Nation.

Makeup is a fickle thing.

A television show like Z Nation demands that makeup artists create elegant, abominable and everything in between. Each artist has their focus, but at polar opposites of the spectrum are Logan Tobia and Kelly Thorpe.

Tobia is the head of the makeup department; his experience from other zombie productions and crime shows means he is in charge of bringing the dead to life. Thorpe is the key makeup artist; her experience in pop music videos and advertising means she is in charge of making sure that everyone looks naturally beautiful amid the apocalypse.

Usually, Tobia's creations feast on flesh, but in one recent filming session, Thorpe's creations were feasting on Tobia's.

The scene — filmed in Browne's Addition — takes place in an old-timey neighborhood full of billionaires, leisurely strolling around. They wear white sweaters, white shorts, white shoes. The men's white mustaches are waxed at the ends and the women carry white parasols. Thorpe created them with the help of others in the makeup department.

Tobia's art lays crumpled up on the ground in the middle of First Avenue. It's a man in a black button-up shirt tucked into black slacks, both of which are drenched in blood.

Tobia, wearing black latex gloves, approaches and the dead man openes his mouth. Tobia turns a red bottle upside down over his face, squeezing red ooze into his mouth until it overflows and trickles down his face, alongside another stream of blood running from his nose.

A group of billionaires kneel over him for a second, then begin devouring him.

Tobia winces and gnashes his teeth, worried that the actors will smear his particular brushstrokes in the frenzy.

They have to do a few takes.

"More violent, really tear into him," one of the directors on set says.

Despite the obvious differences between grotesque and graceful,

Tobia and Thorpe have at least one thing in common; they didn't always want to be makeup artists.

Tobia says he was interested in traditional art. His first experience with makeup just fell into his lap when he was in college. Two of his friends needed makeup done for a final project in a theater production class, and they knew of his skill in painting and drawing.

"Until that point, I never realized that was a job that someone did. You see it on TV, but it never really clicks that someone had to make all those things," he says. "It tied everything together for me."

Tobia says monster makeup artist Steve Wang is his biggest influence. The Creature from the 1987 movie The Monster Squad is his favorite work of Wang's.

In contrast to Tobia's passion for things otherworldly, Thorpe draws influence from the simplistic elegance of Kevyn Aucoin. He was a creative director for Revlon and his work was featured on many covers of Vogue, Cosmopolitan and Allure magazines in the '80s and '90s.

Thorpe's mom bought her new makeup brushes one year when she was in college.

"That basically turned the tide," she says.

After hating her marine biology homework and working at a makeup store just a few hours a week, she fell in love with the art, switched careers and read all of Aucoin's books.

He says he's particularly looking forward to this season of Z Nation because it's his first as head of the makeup department, which means he can influence how gory the show gets.

Still, like Thorpe, Tobia doesn't want his makeup to look like makeup, and he must keep their common principles in mind.

"[When] you are doing a zombie to make them look dead and decrepit, you follow the bone structure," Thorpe explains. "That is the same thing with beauty. To make a really beautiful image, we have to follow the map that is underneath the skin." ♦