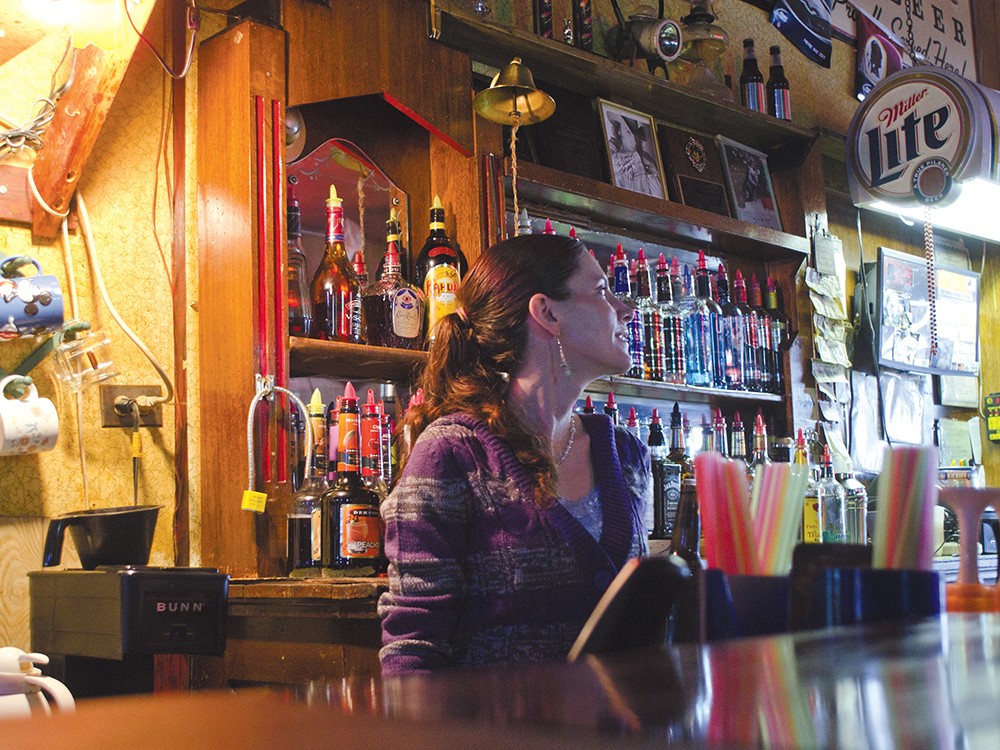 Jacob Jones
Christina Axtman, a part-time bartender at the Outlaw Tavern: \"The mine keeps Mullan alive.\"

Neon light catches in the cigarette smoke swirling off the afternoon drinkers at the Outlaw Tavern in Mullan, Idaho. They sip Rainier beer from heavy glass mugs while snow falls over the desolate streets of downtown, settling on vacant homes and shuttered storefronts.

Baseball caps hang from the antlers of an elk head mounted near the tavern door. A muted TV plays the final laps of a NASCAR race. The jukebox pumps classic rock over quiet chatter and humming coolers.

Throughout the past year, the tavern has served as an outpost for frustrated locals and stubborn survivors, a place to wait out the long months of unemployment and uncertainty.

Christina Axtman, a part-time bartender and former Army cook, paces behind the bar. She trades friendly gossip with the regulars, pausing to refill their mugs or pour a shot of whiskey.

At the edge of town, the Lucky Friday Mine drones with new activity for the first time in months. For more than 70 years, the silver mine has dominated life in the narrow valley, employing about 300 people amid a town of less than 700.

Through boom or bust, as the Lucky Friday goes, so goes Mullan.

So when mine inspectors ordered the Lucky Friday shut down over safety violations in January of 2012, millions of dollars instantly dropped out of the local economy. Workers left town for jobs elsewhere. Businesses closed their doors. The town went quiet.

But locals have reason to hope again. The Hecla Mining Company reopened the Lucky Friday earlier this month, rehiring veteran workers and restarting silver production for the first time in 13 months.

With the resurrected hum of the mine, steady traffic passes through at the shift changes. A new barbecue restaurant, the Motherlode Bistro, opened last month. Residents debate rising property values.

And Axtman has seen the familiar faces of returning miners settling back into the bar stools at the Outlaw.

“I think it’s going to be great for the economy here,” she says. “It’s really helped the morale.”

Hecla expects the Lucky Friday to produce close to two million ounces of silver this year. Hecla President Phillips Baker Jr. says 90 percent of the mine’s previous workers have returned to the job. About 150 contractors will also continue to work there as the company ramps up operations.

“It’s been the lifeblood of the community for a long time,” he says of the Lucky Friday. “The community has really rallied behind the company in this challenging year.”

At the Outlaw Tavern, old-timers with long, tobacco-stained beards chat over drinks with workers in camouflage jackets. A woman flush from her recent income tax return buys a round for the whole place. Axtman marks the occasion by ringing a brass bell above the bar before passing around the free drinks.

Eric Noordam hunches near the end of the bar. A burly man with a thick goatee, he tips back a shot of whiskey as the jukebox fills the hazy tavern with another old rock ‘n’ roll song. He looks at his empty glass.

“I don’t know if it will ever be the same,” he says, “but everyone in the Silver Valley is incredibly happy.”

A native of Mullan, Noordam spent several years working in the Lucky Friday after college. He says he always felt safe, even a mile underground. You get used to it like any other job. He says regulators closed the Lucky Friday because there were just too many freak accidents in a row.

“We don’t want anybody to die in the Valley,” he says. “We’re a tight family … but we know there’s risks.”

Two local miners, Larry Marek and Brandon Gray, died in separate accidents in the year leading up to the Mine Safety and Health Administration’s order to close the Lucky Friday. Gray, 26, used to drink at the Outlaw Tavern after his shift.

Up above the bar, alongside the sports banners and bowling trophies, hangs a modest memorial sign with a pick ax and shovel crossed behind a yellow mining helmet. The neatly printed sign reads “Brando,” along with the years 1985 to 2011.

“He was a good kid,” Noordam says.

Gray adopted sort of a personal credo after racking up several dings and dents in his pickup truck while cruising the surrounding hills, Noordam says. The young miner always took the damage in stride, responding with a nonchalant: “Shit’ll buff out.”

Mining can be dangerous work, Noordam admits, but the people in the Silver Valley live for it. As long as there is silver in the ground, they will dig deeper. No matter how many hits they take, they will always get up and keep working.

Noordam offers a respectful glance to Gray’s sign above the bar.