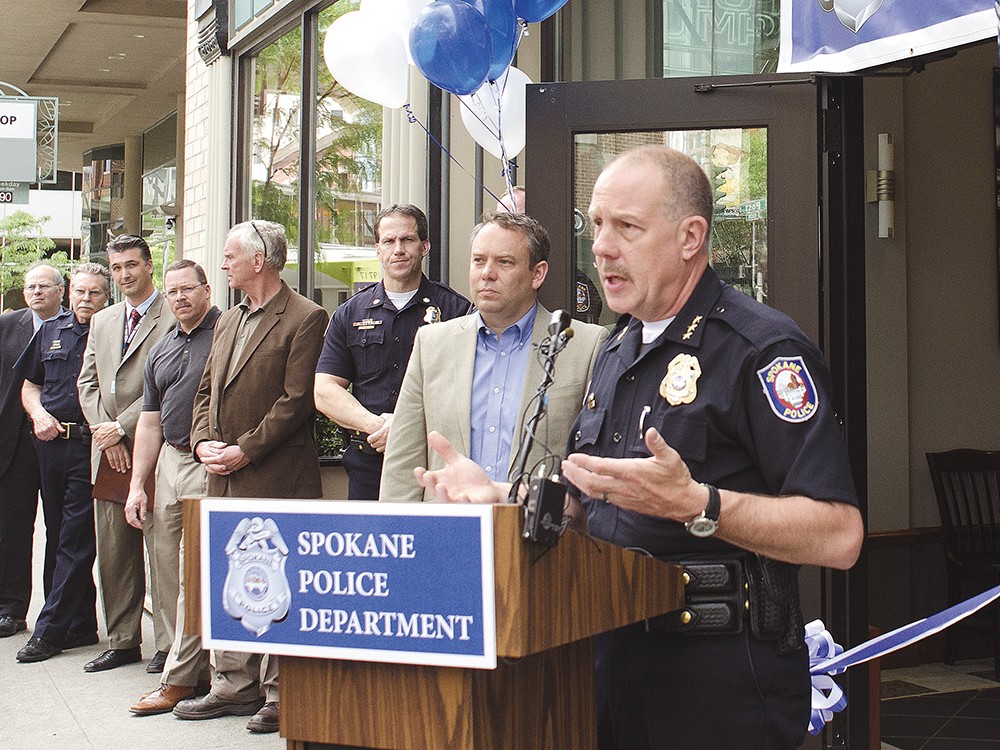 A new Spokane Police substation, opened in downtown last week amid fanfare and balloons, likely will serve as an important test facility for potentially moving the department toward a precinct-based patrol system.

Primarily an information desk for now, the new substation may lead to additional police offices throughout the city. A precinct model would eventually involve multiple stations with specific officers assigned to each patrol area.

Mayor David Condon acknowledged the experimental role of the substation during the ribbon-cutting ceremony last Thursday, calling it part of a “continuing effort” to move police officers closer to the citizens they serve.

“This is, in essence, a prototype,” he says.

Police Chief Frank Straub says downtown is the first neighborhood to have specific patrol officers assigned to it full-time. The new substation, located in the Peyton Building along Riverside Avenue, has one sergeant and seven officers working out of it. Additional officers, bike patrols and volunteers will also use the office. “The idea is to put the police right in the heart of the community,” Straub says.

“That’s definitely been discussed,” she says. “[But] we’re in the very preliminary stages.”

Since taking over the department last fall, Straub has worked to emphasize individual accountability through a data-based “CompStat” policing model that tracks and holds supervisors responsible for incidents in their patrol areas. A precinct system would take that concept a step further.

In theory, Cotton says, having police officers posted to localized precinct stations could help drive increased leadership and accountability as officers interact more closely with their assigned neighborhoods. “It’s taking the data of CompStat and putting it into a real-life model,” she says.

While property crime rates remain high throughout much of the city, police officials have reported dramatic improvements in the downtown area following new targeted patrols and closer monitoring of crime hot spots. They hope the substation will reinforce that progress.

“There is more work to be done,” he says. “This new downtown facility will help us continue to drive down crime.”

Condon says the department has seriously considered adopting a precinct system, noting Straub has experience overseeing departments with precinct stations. The mayor called the opening of the substation an innovative new step against stubborn crime issues.

“We’ve been doing things the same way for a long time,” Condon says, “and we may need to switch that up.”