Don't Hold It In

Tired of being bullied by heartless bureaucrats? For all your pent-up tensions, Urinetown provides soothing relief. 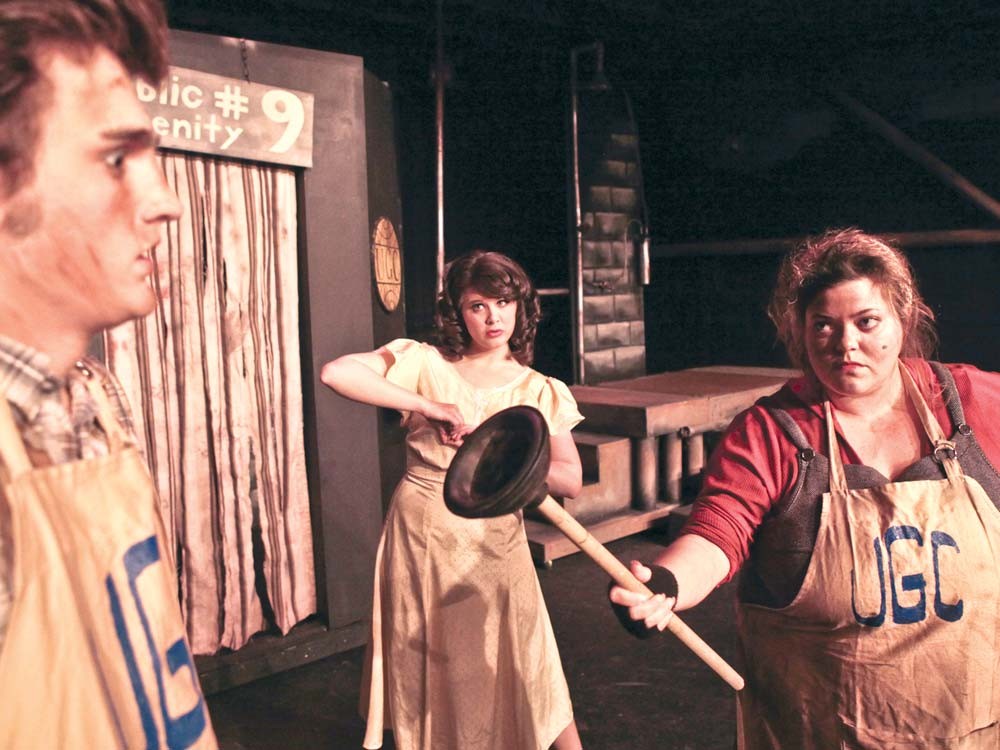 Jordan Beauchamp
Sorry, but you gotta pay to pee.

If nature calls before you enter to watch the Lake City Playhouse production of Urinetown, beware: Waifs with collection plates will be standing guard outside the restrooms.

You’re not going in there, buddy, unless you cough up some coins. You think relieving yourself is a constitutional right? In the world of Urinetown, it’s a privilege to pee.

This 2001 satirical musical by Mark Hollman and Greg Kotis presents a quasi-Depression-era dystopia in which a mega-corporation has a monopoly on every toilet in the world. The common folk are fed up, of course: They spend most of their time standing in line, clutching their privates, shifting their weight from foot to foot. Is anyone around here going to do some rabble-rousing and start a revolution?

They’ve got a suitably Evil Corporate Overlord to fight against. As the villain, Doug Dawson shakes his shrunken jowls and sticks his pointy finger in people’s faces. With his eyebrows forming a black wedge of menace, he refuses to allow anyone to use a public toilet without paying one of his fee hikes first.

In a number called “Don’t Be the Bunny” (message: don’t get killed — be the killer), director George Green has added a half-dozen floppy-eared dancers, and Dawson takes sadistic glee in mowing them down mid-hop.

And as the rich girl who takes up with our working-class hero, Emily Cleveland is an accomplished comedian and singer. While striking poses, showing off her pearly whites and being incessantly chirpy, she also demonstrates vocal range from operatic to throaty. She heightens the ingénue role to mock it.

Part of Urinetown’s fun lies in how the music and lyrics spoof half a dozen other musicals. The town’s downtrodden rebels, for example, climb atop some Les Miserables-style battlements made out of sinks and toilet plungers. As the cop and street waif who narrate the show and provide snarky commentary, Dan Bell and Siri Hafso help us laugh at phony musical conventions so we can ponder more serious matters like corruption and water conservation.

“Satire is what closes on Saturday night,” playwright George S. Kaufman said back in the ’30s. But the Lake City ensemble displays all its arched eyebrows and exaggerated gestures with full awareness of the line between effective satire and pointless cheese.

Lake City’s Urinetown, in its excellent blend of singing, dancing and comedy-with-a-message, is even better than some productions at the big playhouse across town, Coeur d’Alene Summer Theater.