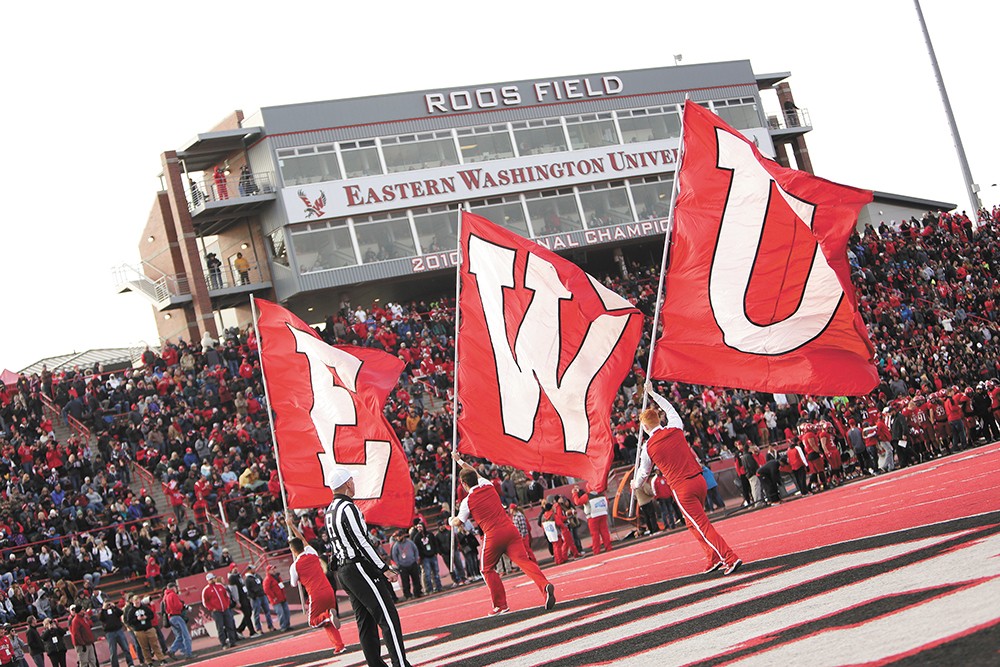 Young Kwak photo
EWU is considering potential cuts to athletics that it previously rejected.
UPDATE: After this article went to press on Tuesday, Eastern Washington University reversed course and decided to keep Shari Clarke as the vice president for diversity and chief diversity officer. EWU also decided not to consolidate diversity academic programs into one department, as is discussed below. "Our students have expressed how now, more than ever, both of these issues are of great importance to them," EWU President Mary Cullinan says in a statement. "Their voices matter."

It wasn't good news. Cullinan told Clarke, the vice president for diversity and inclusion at EWU, that her position created in 2017 would be discontinued by the end of the year, due to a "reorganization of the institution."

"I was very concerned what it would mean for the university and our students in underrepresented populations, who did not have a voice and who did not feel they were adequately represented in the past, which is why it existed in the first place," Clarke says.

She wasn't the only one. Other faculty members were surprised, too. Julia Smith, the faculty organization president at EWU, says she was "disheartened" that Clarke's position was terminated without a plan already in place to support diversity and inclusion. It didn't help that the decision was made just days after the EWU Board of Trustees declined to authorize a review of athletics spending, with the university facing what would now be considered relatively modest budget cuts.

That, however, was all before the pandemic. Today, EWU is projecting it will lose tens of millions of dollars in state funding and tuition and may need to reduce its budget by 12-15 percent. Already, the university is preparing cuts that will impact 400 staff, including layoffs. And the university may declare a "severe financial crisis" that will allow it to entertain cutting academic programs.

"I hate to use the 'perfect storm' line, but really, it's a whole bunch of things that came together," Cullinan says. "It's a bitter time. It's extremely stressful. And we're losing people in their jobs, which is just heartbreaking."

The budget crisis is forcing EWU to rethink what it will look like in the future. While it dismissed the idea of cutting athletics spending months ago, for example, the Board of Trustees has now authorized an outside consultant to review all aspects of athletics.

Yet as it considers where to make cuts, it's put more scrutiny on what EWU prioritizes: Will more programs benefiting students of color get cut? Will EWU put academics above athletics?

A combination of factors, not just the pandemic, got Eastern Washington University to this point.

During the last recession a decade ago, EWU lost more than $50 million in state dollars, Cullinan says, and the university struggled to make that up without raising tuition too much. Then, a few years ago, enrollment started to dip from a headcount of 10,650 students in 2015 to, in 2020, 9,869. That's caused budget reductions of 3 percent in 2019 and 2020, which already had faculty frustrated.

In February, a group of faculty suggested one way to save some money: Look at athletics spending.

Led by associate physics professor David Syphers, the faculty members compiled a report that found athletics cost EWU $12 million to $14 million per year. They presented an array of options to save money, including cutting athletics entirely. The Board of Trustees, however, didn't take the idea of examining the athletics budget very seriously — they quickly declined to authorize an independent review of athletics.

Meanwhile, the university in March decided to cut Clarke's position in the Office for Diversity and Inclusion, a move first reported by the Black Lens newspaper. Clarke says she's "clueless" as to why the decision was made, but says since she was hired in 2017, she got pushback on various projects she hoped to pursue.

"There were a lot of barriers to moving an agenda of inclusive excellence forward," she tells the Inlander. "And I don't know if the barriers were based on financial concerns or a complete and total lack of commitment to the position, and true understanding of what diversity is, really."

Clarke says she was very disappointed with the decision. It was crucial to have a person of color on the executive leadership team advocating for students, she says. A petition started by the Multicultural Coalition of EWU urges the university to reverse course, and it's gathered more than 1,000 signatures.

Cullinan, however, says that spaces for students of color won't be taken away. The EWU Multicultural Center and Pride Center will be put under student affairs. And four academic diversity programs — Chicanx, Africana, American Indian and women and gender studies — will now report to one department chair, as they should according to the faculty contract.

"A student isn't going to feel it. They're not going to see a difference," Cullinan says. "We felt what really needed to happen was that we needed a leader in academic affairs," she says.

In her view, that new position, an assistant vice president for equity and inclusion, can potentially make more of a difference in the classroom. Plus, they would still be on her leadership team.

Then came a hitch with that plan: COVID-19. Because of the pandemic, Cullinan says they haven't been able to do a search to hire someone for that position. EWU can't do those interviews over Zoom, and she doesn't know when that will change. So when Clarke is finished at EWU, there won't be a position focused on racial equity and inclusion on Cullinan's leadership team.

"It's a serious problem," Cullinan admits.

Not only that, but the pandemic made the simmering budget issues at EWU burst into flames. Without students on campus to use dining services, book stores or the rec center, all of the pieces generating revenue for EWU stopped, costing millions. And the state has made it clear that it will pull millions more in financial support for universities, Cullinan says.

As EWU moves to more online learning due to COVID-19, Clarke worries about every student having equitable access. And she worries about other programs for students of color being cut.

"I had a call last week from another area on campus, saying they needed the help of my office, because students of color were absolutely terrified, in the midst of COVID-19 and the lynching [of George Floyd] we saw, and all the situations going on," Clarke says. "I think there's a lot of fear and concern. And you need an office that can deal with students right there."

At the May 29 Board of Trustees meeting, Julia Smith, the faculty organization president, shared a message.

"What's a university? At the core — at the heart — of a university are students. And specifically, students' relationship with faculty, with learning, with becoming wiser, more knowledgeable, more ethically sophisticated than they were," Smith says in a written statement.

That means the core responsibility should be instruction and degree programs, she says.

Cullinan says that, truly, everything is now on the cutting table. That includes athletics. The university already decided not to give the athletics budget $2 million that was previously going toward it, and an independent consultant should provide more input before the fall.

"Where could costs be cut, but also what changes could be made that could help us be more fiscally responsible in those areas?" Cullinan says. "That's a big section of the university that is separate from academics, although our student athletes are wonderful students."

Smith says she's encouraged that EWU is listening to faculty on the athletics spending, even if it took a pandemic for EWU to do so. But she says the situation for EWU remains dire.

Smaller degree programs could be cut, though Cullinan stresses that students in those programs would be able to graduate first. With hundreds of staff members impacted by layoffs or pay cuts already, faculty could be next.

Still, if there's a message of hope to be shared, Cullinan says it's that EWU will come out of the other side of this crisis, somehow.

"We will emerge from this probably a smaller institution," Cullinan says. "But my vision is that we will be even more focused on what students need, and be an even stronger resource for the whole community." ♦

The original print version of this article was headlined "Sizing Down"