Opening this week: the Spielberg (and Abrams) version of the childhood you never had. 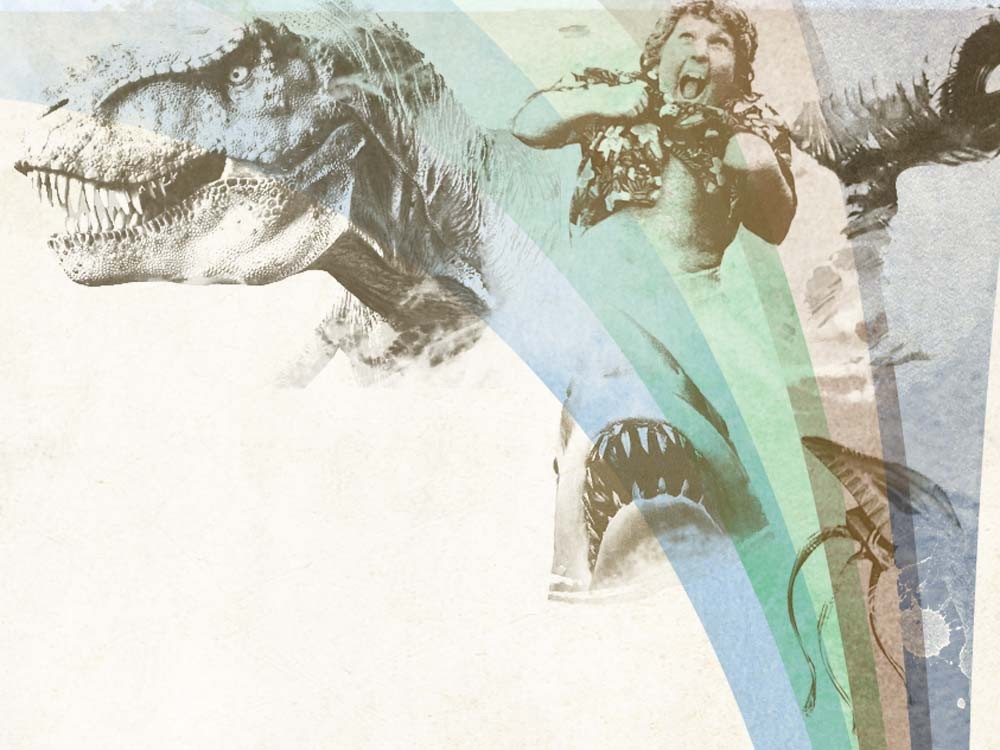 In the late 1950s, while he was filming Westerns for Boy Scout merit badges with his dad’s 8mm camera, the young Steven Spielberg never accidentally stumbled in to an old-timey gunfight. Not even once.

Likewise, in the late 1970s, while J.J. Abrams was making proto-sci-fi with his own Super 8, he never once witnessed a government train explode, releasing a monster/alien/nuclear mutant of some kind.

And yet both men have said their new film, Super 8 — about kid filmmakers who find themselves running from a monster of some sort — has its roots in their respective childhoods. Abrams goes so far as to call it “autobiographical.” I believe that both men believe this.

Spielberg says the film is unique because “it isn’t part of a franchise.” That’s just a lie.
Super 8 isn’t just a franchise, it’s a super-franchise — a collaboration between film’s biggest/oldest (Steven Spielberg) and one of its hottest/youngest (Abrams). Both men have made their careers packaging the Hollywood ideal as authentic American experience. Along the way, they’ve convinced us that our memories of summer blockbusters are as valid and as important as our memories of Little League and lakeside rope swings. Maybe more valid. Not everyone had a rope swing, but who hasn’t seen E.T.?

Spielberg makes films about film. He invented the blockbuster by taking all of early Hollywood’s most pleasing tropes and suspending them in an analgesic balm of doe-eyed amazement and baby boomer nostalgia. His magnum opus, Schindler’s List, despite being a respectfully horrifying black-and-white inquiry into the Holocaust, still had that one girl in her red coat. Even when trying to make a document of genocide, he couldn’t resist a wink to the spectacle possible on celluloid.

In a similar way, Abrams makes films (and television) about genres. Cloverfield was monster movie agitprop told from a Blair Witch point of view. Lost was an existential Swiss Family Robinson. He has made one excellent series about spy series (Alias) and one flawed but laudable series about science-fiction series (Fringe).

Abrams’ most lackluster work has been straight-ahead rom coms (The Pallbearer, Under Covers). So has Spielberg’s (The Terminal). This isn’t a coincidence. Neither man makes movies about people. They make movies about movies.

And every review so far, good and bad, is clear about one thing: Super 8 is Abrams doing Spielberg — a genre film about genre films.

Both men are junkies for mythologizing the wonder of childhood, connecting the scope of epic film making and the awe of effects with the human need to feel young. But where Spielberg mines his childlike fascination with the post-war epics he grew up with, Abrams mines his childhood astonishment with Spielberg.

Insofar as it is the only non-sequel of this summer’s big movies, analysts say the future of “original” blockbusters lies with the film the two men have made together.

If you want to truly get Super 8 — thereby preserving the myth of the “original” summer blockbuster for your children — these are 35 years of baked-in Spielbergian fantasy-nostalgia movie principles you need to catch up on:

JAWS  (1975)
Don’t show the monster until the third act.* It’s easier to make people fear the unknown than the known.* (Abrams has extended this to keeping it out of the marketing materials, too.)

CLOSE ENCOUNTERS OF THE THIRD KIND  (1977)
Big mechanical monsters aren’t needed to enthrall people. All you have to do is get some kids* and at least one adult* (not too many) to stare slack-jawed at a green screen* for two hours and add copious special effects.* Moral: Wonder heightens fear* the way laughter heightens sorrow.

THE INDIANA JONES QUADRILOGY  (1981, ’84, ’89, 2008)
Cold War-era American paranoia* drove golden age cinema; therefore, both the bad guys and the good guys must be hiding knowledge of the paranormal* from normal people. All heroes must have daddy issues.*

THE GOONIES  (1985)
Spielberg executive-produces the archetypal pre-teen fantasy: A group of misfit kids* with absent, ineffectual parents* stumble upon a secret* that will change their lives forever.* (In pure plot terms, Super 8 is Goonies meets War of the Worlds; see below.)

JURASSIC PARK  (1993)
The history of American hubris: No matter how tightly you bottle up scary shit, scary shit will always escape.* Always bring your kids along,* even to an island of super-predators. They will end up saving the day.*

WAR OF THE WORLDS  (2005)
Dakota Fanning* stars. (Her sister Elle is one of Super 8’s few non-amateur child actors.) A group of defenseless humans from broken homes* will always find a way to survive on wits and sheer determination,* ultimately winning out against a force that is much greater than them.*