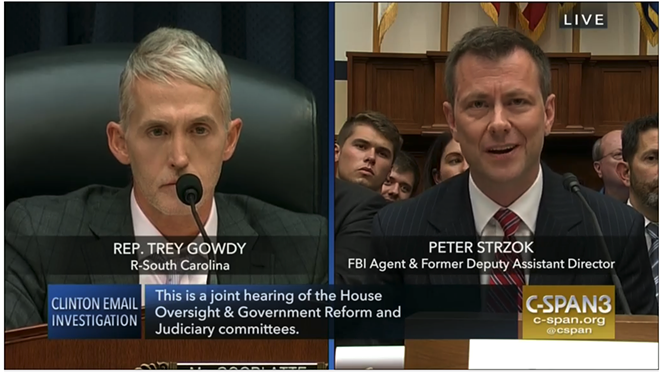 WASHINGTON — The embattled FBI agent who oversaw the opening of the Russia investigation mounted an aggressive personal defense Thursday, rejecting accusations that he let his private political views bias his official actions and labeling Republican preoccupation with him “another victory notch in Putin’s belt.”

“Let me be clear, unequivocally and under oath: not once in my 26 years of defending my nation did my personal opinions impact any official action I took,” Peter Strzok, told House lawmakers investigating what Republicans say is evidence of rampant bias at the top levels of the FBI.

But in defending himself and his agency, Strzok had to weather hours of attacks by Republicans, whose accusations drifted from personal animus toward President Donald Trump to blatant lying and moral misconduct with a senior FBI lawyer, Lisa Page.

In his first public comments since private text messages between Strzok and Page were disclosed, the agent concluded opening remarks with a pointed broadside against his antagonizers.

“I understand we are living in a political era in which insults and insinuation often drown out honesty and integrity,” Strzok said, continuing: “I have the utmost respect for Congress’ oversight role, but I truly believe that today’s hearing is just another victory notch in Putin’s belt and another milestone in our enemies’ campaign to tear America apart.”

He concluded: “As someone who loves this country and cherishes its ideals, it is profoundly painful to watch and even worse to play a part in.”

The hearing, convened by House Judiciary and Oversight committees, devolved into a spectacle almost as soon as it began, as pent-up rage between House Republicans and the FBI broke into the open in spectacular fashion, including with an almost immediate threat to hold Strzok in contempt of Congress.

Strzok, a career agent, played a pivotal role in two of the bureau’s most politically fraught cases in recent memory: the investigation into Hillary Clinton’s email practices as secretary of state and a separate inquiry into Russia’s attempts to interfere in the 2016 election and its interactions with the Trump campaign.