It's been a rough year, and many of us have retreated into exclusively upbeat, glass-half-full entertainment to offset the intensity and unpredictability of the world outside. If you're looking to light up and tune out, allow us to recommend a handful of hopeful, idealistic films that will accomplish this. Many of them are off the beaten path, but all of them will lift your spirits while you bliss out.

HUNT FOR THE WILDERPEOPLE (2016)
Shortly before he became a Marvel-directing, Oscar-winning juggernaut, Taika Waititi made this impossible-to-resist comedy about a juvenile delinquent (Julian Dennison) and an irascible farmhand (Sam Neill) surviving out in the Outback, while child services is on their trail. Wilderpeople was a massive hit in its native New Zealand and has developed a cult in the U.S., and its brand of deadpan slapstick is going to be explosively funny when you're a few tokes deep.

RANGO (2011)
Who would have thought we needed a family-friendly cartoon paying homage to Sergio Leone and Akira Kurosawa? Rango is a delightfully weird animated comedy about a neurotic chameleon who wanders into a dry desert town and stumbles into the role of sheriff, eventually going scaly head to scaly head with a rattlesnake gang leader. It's not just for kids, and its off-kilter visual style will surely pop when you're under the influence.

The Trip to Greece

THAT THING YOU DO! (1996)
Tom Hanks wrote and directed this buoyant comedy set in the era of Beatlemania, when a Pennsylvania rock band has a surprise hit single and blows up overnight. The movie is bright and colorful, boasts a cast of young up-and-comers (Steve Zahn, Tom Everett Scott, Liv Tyler, Charlize Theron) and the Oscar-nominated title tune by late Fountains of Wayne frontman Adam Schlesinger is a fake-pop gem.

THE TRIP SERIES (2010-2020)
Comedians Steve Coogan and Rob Brydon have teamed up with director Michael Winterbottom for four TV specials in which they visit beautiful places, eat decadent food and riff off each other, complete with their arsenal of celebrity impressions. Those series have been edited into feature length for American distribution, and the quartet of Trip films is now on Hulu. They'll make you laugh, and they'll make you hungry. 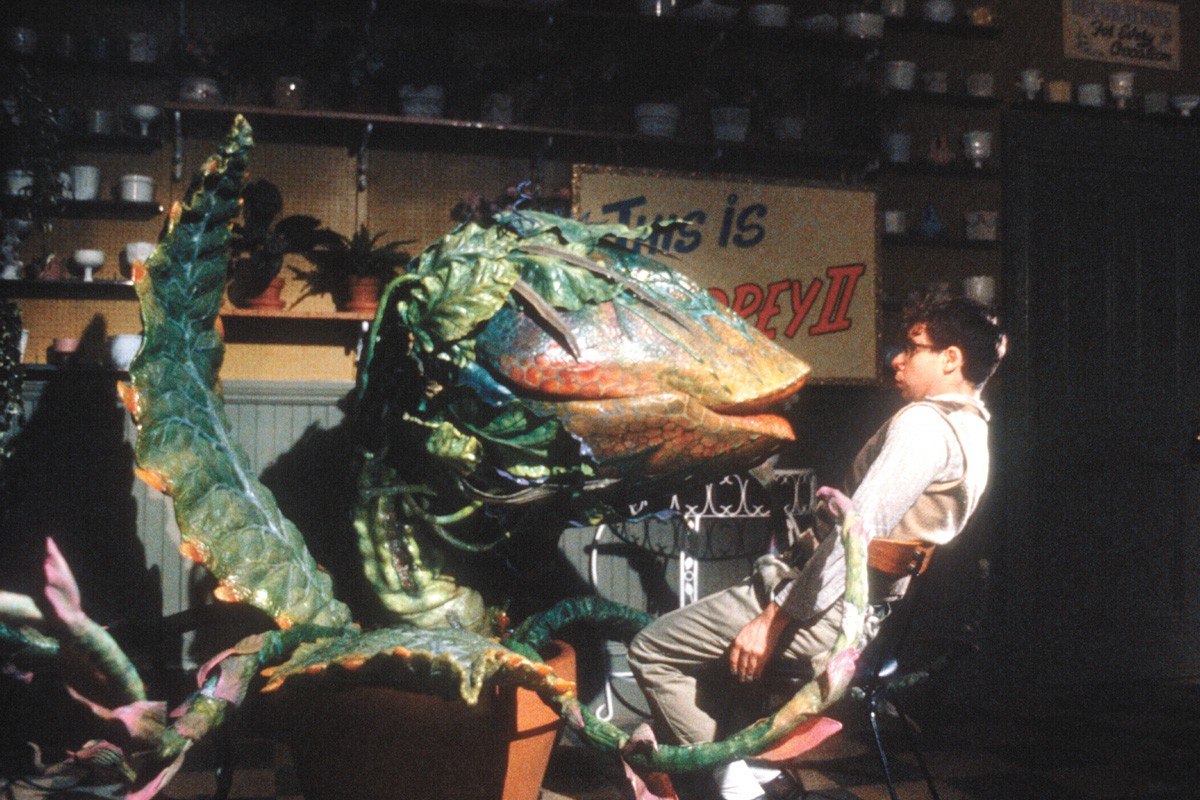 LITTLE SHOP OF HORRORS (1986)
Based on a Broadway hit, itself inspired by a 1960 Roger Corman quickie, Frank Oz's delightfully macabre horror musical gets big laughs and catchy tunes out of the story of a meek florist's assistant and the bloodthirsty alien plant whose appetites he satiates. The cast is great — Rick Moranis as the dorky hero, Ellen Green as his breathy love interest, Steve Martin as a masochistic dentist — and Four Tops singer Levi Stubbs provides the voice for the man-eating Audrey II.

TOYS (1992)
OK, Toys is a bad movie. Really bad. Barry Levinson's twee comedy stars Robin Williams as a young-at-heart weirdo who must rescue his late father's toy factory from the clutches of his militaristic uncle, and it has the look and feel of a children's film but with creepy sexual undertones of something more adult. If you're high, none of that will matter, though, because the movie's candy-colored set design would be super awesome while under the influence. It also gets bonus points for having some scenes shot near Rosalia, Washington.

TOP SECRET! (1984)
In between Airplane! and the Naked Gun series, the Zucker-Zucker-Abrahams team turned in this bizarre, riotous parody of both spy thrillers and teen beach party musicals, starring Val Kilmer as a surf-rock heartthrob who's embroiled in a scheme to halt the creation of an East German super weapon. It's full of unbelievably silly set pieces — an underwater saloon fight, an entire scene filmed in reverse, a Rambo-like shootout involving French militants — that are guaranteed to give you the giggles.

THE TRUMAN SHOW (1998)
The less you know about The Truman Show, the better. I'm imagining a stoned viewer discovering the secrets of this brilliant, sensitive fantasy for the first time, and I bet it's a trip. Jim Carrey plays a painfully ordinary guy living a cookie-cutter existence in his idyllic small town, but he starts to notice small idiosyncrasies and inconsistencies that make him question the very nature of existence. Light up and let it blow your mind. ♦

The original print version of this article was headlined "How High"