Date night at the symphony! This weekend's concerts offer a serenade suitable for swooning. 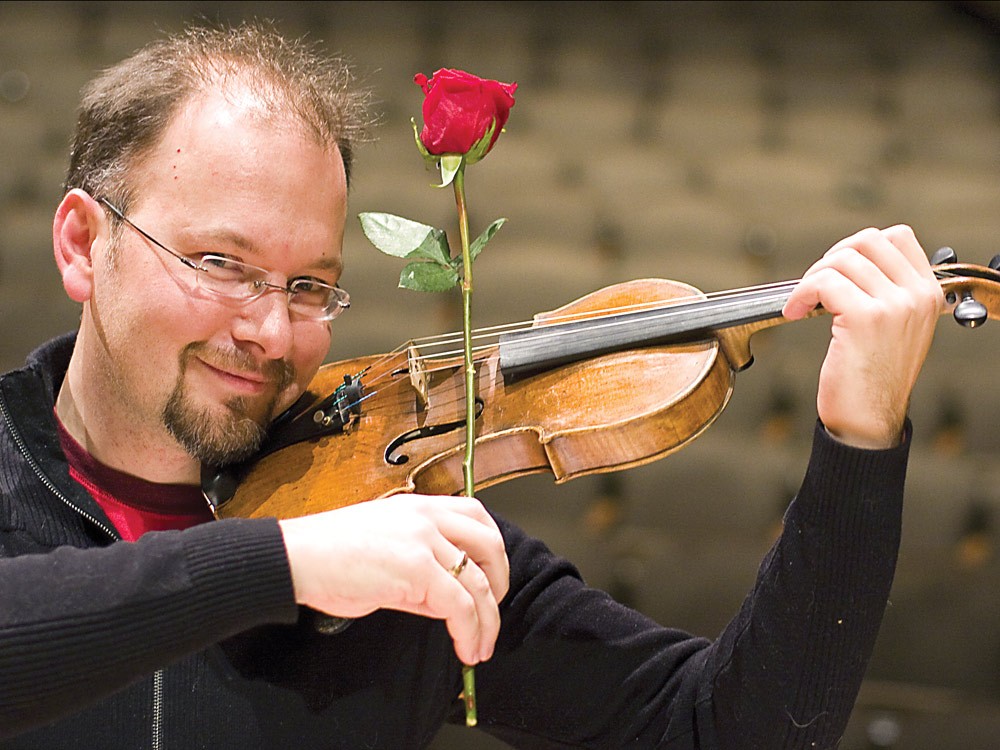 It started with one of those public-radio driveway moments. About a year and a half ago, Mateusz Wolski, concertmaster of the Spokane Symphony Orchestra, was tooling around town when, he says, “I heard this fantastic piece on my car radio. ‘What is this concerto?’ I asked myself — I didn’t know it. I had probably tuned in somewhere around the beginning of the third movement — so I pulled over and stopped and just listened. Then I called Verne [Windham, of KPBX], and he said, ‘That was the Korngold.’” And that is why, this Valentine’s weekend at the Fox, young lovers will hold hands and older couples will make mutual goo-goo eyes as Wolski performs the lush, sweeping, ethereal crescendos of the violin concerto by Erich Wolfgang Korngold.

In the mid-1930s, after escaping from fascist Austria, Korngold found himself in Hollywood writing musical scores for a whole slew of costume dramas and swashbucklers. After the war, he assembled tunes from four of his film scores into a concerto. It was slow to gain popularity — how could a Hollywood guy write serious music? — but it’s just waiting to become your Valentine’s soundtrack.

If you’re anything like me, the opening moments of the Korngold violin concerto will have you imagining lovers’ disembodied souls, swirling higher and higher toward heaven. Perhaps you’ll envision birds in flight, twittering their love songs as they waft upon the perfumed evening breeze. (Yeah, Korngold’s melodies have a way of turning your brain into romantic mush like that.)

But Wolski doesn’t go in for such visualizations. Instead, he says, “I don’t picture a whole string of emotions. One of the beauties of music, to me, is that there is virtually no emotional situation that can’t be put out into the physical world by means of vibration.”

He has one particular vibration in mind.

“I think what really sets the tone for the whole piece,” he says, “is the fifth note.”

Really? Right from the top, the soloist launches into that haunting birds-in-flight sequence, but in a 25-minute work filled with thousands of notes, how can something so early be so crucial?

“It’s a very surprising note. He goes into a leading tone,” Wolski says, with the violin climbing ever higher instead of resolving the cadence into a nice, neat little tune, as listeners might expect. “Going into a leading tone so soon like that — and not resolving it — sets you up for a journey that’s going to be different.”

Ask Wolski about the technical demands in the Korngold, and he starts describing, in his slight Polish accent, “those break-necking passages” in the third movement, with the score “blending doublets into triplets, and then it switches into regular 16th notes, and then an accelerando, all in one bar. The orchestra is always trying to catch up with the soloist.”

Sounds difficult. And there’s even more pressure on Wolski to perform, because this weekend’s Spokane concerts have a direct link to Korngold himself. That’s because Wolski studied for six years with Glenn Dicterow, the longtime concertmaster of the New York Philharmonic who studied with revered violinist Jascha Heifetz — the man who first performed the Korngold concerto 65 years ago.

Mateusz has practiced for long hours on his Carlo Landolfi violin, made in 1779, but for Korngold’s ultra-romantic approach, technical proficiency isn’t enough. The violinist has to have some passion in his soul.

Fortunately, on that account, the violinist’s wife is reassuring. Dawn Wolski says that her husband is capable of “twirling me in a sudden dance step while the water runs on the dishes in the sink.” And that’s not all: Early in their marriage, Mateusz surprised her with “an amazing, intricate, four-post mahogany bed frame.” He had carved and sanded it himself by hand, Dawn says, and even “put our wedding band design into the base of each post, with finely inlaid ebony to mirror the violin” in the design.

The man carves a wedding bed for his wife and plays serenades for her on his fiddle? He passes the Korngold passion test.

And that’s why, a couple of minutes into the concerto this weekend, Mateusz will be putting the emotions out there on a string, and some of us will be visualizing impassioned souls flying toward the stars. Perhaps we’ll catch the eye of a loved one and feel that special romantic glow.