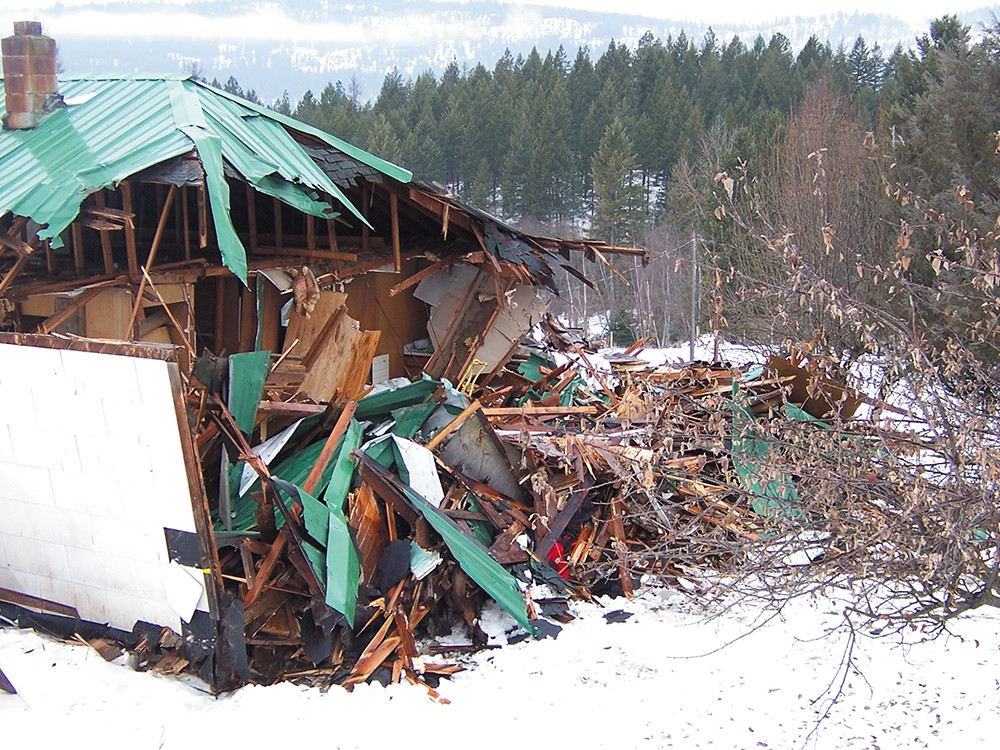 Steve Schroeder\'s childhood home in Colville was razed before he could remove all of his belongings.

Barred by a foreclosure order from setting foot on the land where he grew up, Steve Schroeder stood just beyond the property line and stared in disbelief at the splintered wreckage of his childhood home.

For more than three years, Schroeder had struggled to save the house and 200-acre property along Hodgson Road, north of Colville. Despite all of his objections, appeals and other attempts to stall, his loan company ordered the house demolished in February of 2012.

Schroeder’s parents had moved into the four-bedroom farmhouse in 1959, the year he was born, raising eight children under its roof. He had his life and livelihood staked in the surrounding land. It was the only home he had ever known.

That afternoon, he went to check his mail at the property as usual and found the house smashed to ruins. His heart sank.

“They destroyed it,” he says. “It’s devastating.”

A cattle rancher and tree farmer, Schroeder had taken out a large loan to pay off a previous debt in 2007, just before the economy tanked. With timber prices down, he fell behind on payments with his mortgage company, Excelsior Management Group, and the charges kept adding up.

Slowly his grip on the land slipped away as foreclosure proceedings moved forward. A local judge awarded control of the property to Excelsior. A restraining order drove him off the place. His objections were dismissed. Then the backhoe arrived.

Despite all those setbacks, Schroeder will now get a second chance to make his case after the state Supreme Court handed down a unanimous ruling last week reinstating his court claims and ordering a new hearing on the issue.

Schroeder knows the court’s new ruling is not a complete victory, but for the first time in years he feels like he has a fighting chance to save his land.

“This is the most wonderful thing that’s ever happened to me,” he says now. “It was a total surprise. … It’s unbelievable.”

Up an unmarked set of stairs inside the Linoleum & Carpet City building in north Spokane, Schroeder meets with his lawyer at the Caruso Law Offices. Attorney Matthew Pfefer sits surrounded by stacks of law books, court files and legal papers.

Schroeder explains he has lived in a converted storage building on a piece of property neighboring his family’s old land for the past several years. He says the case has strained his marriage. He has sold off what remaining assets he could to get by.

“Scrounging,” he says. “They took all my stuff up there I had to work with and basically broke me.”

Schroeder says he initially contacted Pfefer through a newspaper ad. They had their first meeting in a garage in Spokane Valley, never expecting to face the state Supreme Court together.

Pfefer says the crux of Schroeder’s dispute lies with the state’s foreclosure protections for farming lands. State law says all foreclosures on agricultural property must go through the courts and allow owners a yearlong “right of redemption” to potentially reclaim the land.

When Schroeder first fell behind on his payments, Excelsior initially launched foreclosure proceedings, but later agreed to a settlement refinancing the loan for a year. Schroeder says he did not realize it at the time, but a section of that settlement waived his right to claim agricultural property protections in any future foreclosure.

“It’s been a farm my whole life,” Schroeder argues. “That is my livelihood.”

After a year, Excelsior came after the property again without the obstacle of going through the courts. A request for a court order to block a sale of the property was dismissed. The land sold at a trustee sale.

With the property sale finalized, Schroeder struggled to remove five decades of accumulated belongings off the land. Photos show he had collected dozens of old automobiles, antiques, century-old newspapers and other eclectic relics.

Excelsior argues Schroeder had well over a year to move out, but much of the property remained when the backhoe arrived. Most things were either destroyed or hauled off as scrap.

Excelsior’s attorney Phil Haberthur declined to comment on the case, saying he would need to check with his client before making a statement.

Meanwhile, Pfefer continued to file objections and appeals up through the levels of the state court system until June of last year when the case, Schroeder v. Excelsior Management Group, was called before the state Supreme Court.

In 12 years of practicing law, Pfefer says he had never argued in the state Supreme Court before June 26, 2012. He now recalls his argument before the state’s highest court with a nervous smile.

“I don’t know that I realized how intense it was going to be,” he says.

As he stepped into the Temple of Justice in Olympia, he wore a brown suit and tie. He remembers trying to anticipate questions from the justices. He spoke quietly. “They pounded on him,” Schroeder says of the justices.

Excelsior’s attorney Haberthur presented opposing arguments, asserting Schroeder had signed the previous settlement waiving any agricultural property protections and agreeing to not use the land for farming.

Haberthur alleged Schroeder may have potentially committed fraud by trying to go back on his previous agreement.

“He’s trying to disavow those prior representations,” the attorney argued.

Justices questioned whether Schroeder had much choice in the wording of the previous settlement as he tried to avoid foreclosure. They also wondered how he would be expected to make his loan payments if the settlement prohibited him from raising money by selling livestock or timber off the property.

After eight months of deliberation, on Feb. 28 the state Supreme Court released its unanimous decision in Schroeder’s favor.

“If the property in question was primarily agricultural … then the property must be foreclosed on judicially,” the opinion states.

The opinion also reinstated Schroeder’s previously dismissed claims for damages and ordered a new hearing to determine whether his land qualified for agricultural property protections; if so, the previous foreclosure sale would be voided. 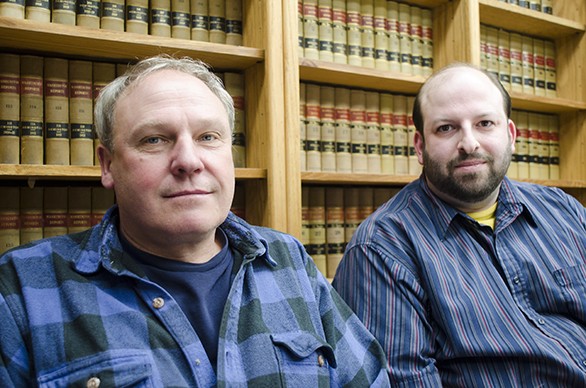 In the cramped law office above Linoleum & Carpet City, Pfefer explains the Supreme Court’s opinion offers a great opportunity to reset the case, but he does not want to celebrate too early.

A companion case remains pending on appeal to determine the rights of ownership on the personal possessions still on the land after the sale, Pfefer says, which would include the house and collectibles destroyed by the backhoe.

The pair also will work to collect evidence of the property’s agricultural characteristics. They will gather old photos and appraisals to present at a new hearing.

As the meeting comes to a close, Schroeder curses Excelsior and other mortgage companies. He thinks of his demolished home and lost land. He wonders how many other families have faced the same legal battles in recent years.

But he has new hope. His case may now help others fight back.