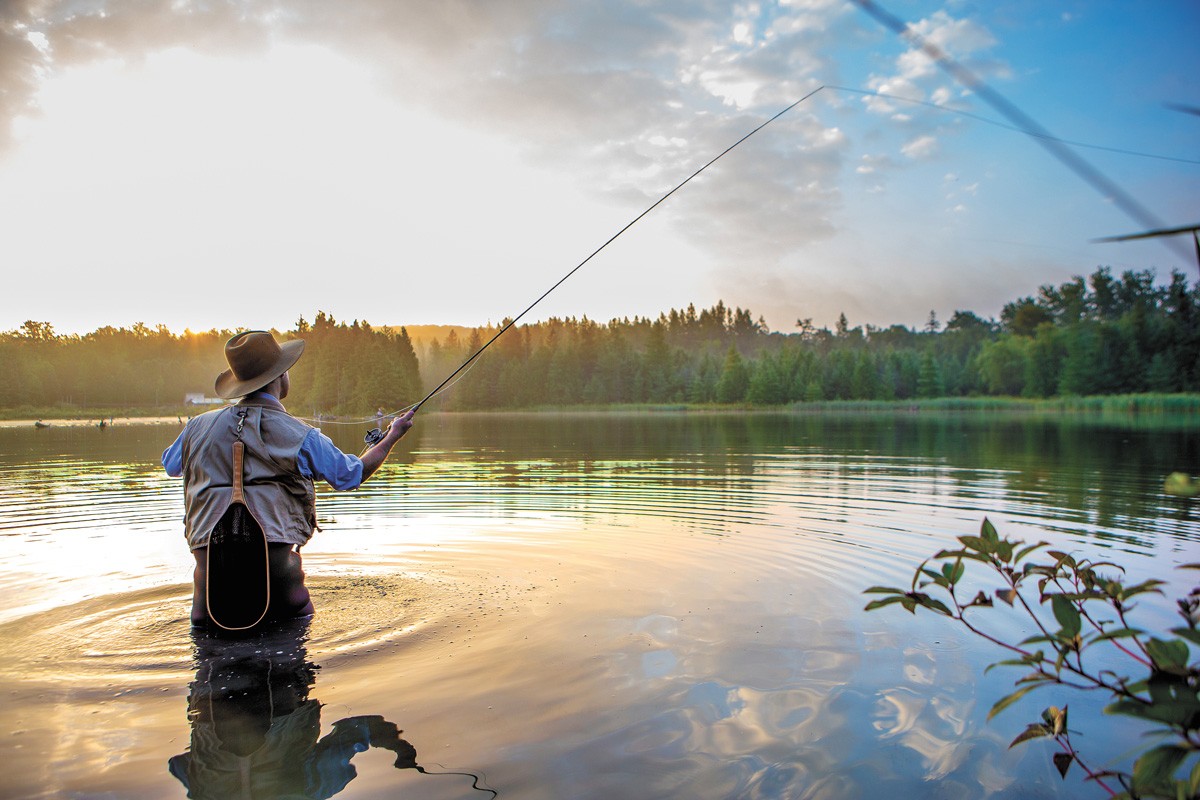 For those relatively new to the sport of fly fishing, wading into the water is an easy way to get started and only requires a pair of waders.

Fly fishing guides won't likely tell you their real secrets to success right away (you've got to earn the privilege), but there's one tip they'll readily share, even with perfect strangers: Fly fishing is way easier to get into than you think.

That's not to say there isn't an incredible amount of information to be learned about fly fishing, from specialty techniques using specific rods and flies, to the complex art of tying flies themselves.

For instance, Cheney retiree and avid fisherman Rob Driscoll recalls taking a fly-tying class when he was in middle school, when his teacher insisted a particularly complicated fly would take them six months to learn to tie properly.

"People say, 'Is fly fishing a sport, recreation, a hobby?' For me it's been an avocation," Driscoll says, "but I think since I retired, looking at it, it's really art. ... You can continue to learn more and more about it."

Thankfully for the rest of us, you don't have to know all the detailed ins and outs before you can get out on the water for that magical, personal connection with nature.

In fact, just this spring, Driscoll started up Fly Fish Spokane guide company to help more people access the Spokane River fishery, where redband trout are the prize to be caught and released.

The company offers guided fishing trips in and around Spokane, either on float boats that can hold up to two anglers and a guide, or on walk-and-wade trips where up to three anglers can go with a guide and learn more about specific creeks and trails.

Driscoll says he was inspired to start the company after reading the Inlander's "Big Ideas" issue in April, in which the paper asked local thought leaders how Spokane could be improved. Downtown Spokane Partnership President and CEO Mark Richard suggested Spokane incentivize more companies to offer urban recreation on the river.

Driscoll had already been leading fishing tours all over Montana in his retirement, even as he spends most of his time in Cheney with his wife, a professor at Eastern Washington University, and his son who's attending Gonzaga Prep. Upon reading Richard's pitch, Driscoll called Richard up for a coffee and set about making the Spokane guide company a reality.

"I could not believe this urban fishery is such a secret," Driscoll says. "Montana's one of the best fishing spots in the world, but I believe the Spokane River is an excellent fishery right here in town."

Richard was pleasantly surprised to hear from the passionate fisherman so quickly, and the two talked about how Driscoll could partner with local businesses and get the word out about the guided fishing trips in hotels and other places where visitors can find more information about recreation opportunities.

"This is so Spokane ... I don't think people realize how special Spokane is: All you need is an idea and the courage to pick up the phone, and stuff like this can happen," Richard says. "He's got this love and passion for the outdoors, and he's got this expertise he can put to it." 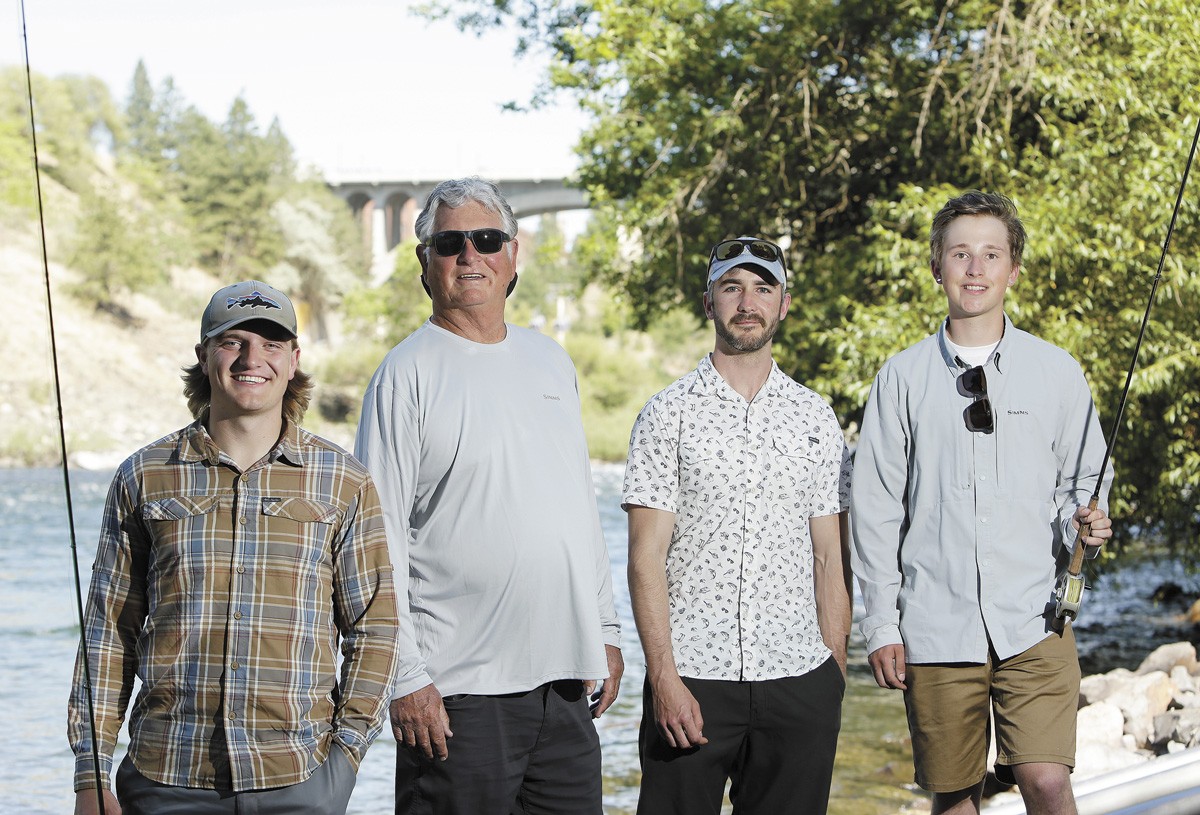 Driscoll has three guides to lead Spokane River trips, and the company's been taking people out on the river since May.

Fryt got into fly fishing while he was serving in the military.

"I was in the Army, stationed out in Tacoma, so that's how I got into fly fishing, just as a way to kind of escape from the Army a little bit," Fryt says.

One of the things that was most surprising to him as he learned more about the sport is that it's not just for catching trout. He's caught everything from bonefish in the Caribbean to carp in the downtown Los Angeles River.

Most of the time the barbless, baitless fishing technique is just catch and release, which Fryt says has led some people to ask why he enjoys it.

Fields, who will be a Whitworth senior studying health science this fall, was first introduced to the sport while on a Yellowstone trip with his grandfather at the age of 4. He started seriously picking it up as a high school freshman in Bellingham, and has continued with the passion here in Spokane.

"I think a lot of people look at fly fishing as just one thing, and what I've come to find over the last few years is that it's an ever-evolving sport," Fields says. "There's all these different types of fly fishing within the actual sport itself. If you get bored of one thing, you move onto the next."

Crawford has a particularly deep passion for fly fishing as it helped him through a very difficult time in his life. When Crawford was 9, his father gave him a fly rod shortly before dying from cancer.

"Since then ... it's my way to escape everything that's going on. It was a way to grieve over his death," Crawford says. "I could go up into the mountains and just cast around flies on little trout creeks and get away from everything that was going on. For me it's been a really important part of my life."

Crawford says his father wasn't actually someone who went fly fishing, but with that gift he sparked a lifelong passion in his son.

"I think he just wanted something for me to remember him by — something active I could do," Crawford says.

Starting at that young age, Crawford would fish alone in the early mornings on group camping trips through his church, and he has since soaked up as much knowledge as he can.

"It's my way of life. It would be an understatement to say I love it," Crawford says.

For those relatively new to the sport, Crawford says that, of course, a boat trip can be fun, but a walk-and-wade trip may offer the most knowledge you can turn around and use on your own, since a pair of waders are a lot cheaper than a raft.

"If you were a beginner, I would say wading is easier because you can do it without the help of someone else, but you still need to know where to go and where to present the flies," Crawford says. "I have really honed in on my skills to tie different types of flies. I think that's really important for a new person, they really need to take the time to learn what's in the water, because that's what you're imitating, is whatever they're eating."

Introductory classes with Fly Fish Spokane for up to four anglers start at $200 for three hours of instruction. Guided trips range up to $415 for a full day trip for two with lunch and nonalcoholic beverages included. None of the class costs include the cost of a state freshwater fishing license, which you can buy online at wdfw.wa.gov/licenses/fishing.

Driscoll also notes that there's something special about wading, which can be more dangerous than boating.

"The water is a special thing to fly fishermen and women," Driscoll says. "To have that water rushing around you and your waders ... Wade fishing for me has always been more tranquil, and the reason for that is you're just you and the river."

Just a few months into operating, the team is fielding calls from all sorts of people who are interested in fly fishing, from visitors to Spokane to locals who don't yet know some of the best local spots to go.

Fields says it's been cool to see people from Spokane who've never been fishing on the Spokane River before, and helping them realize the access they've had available all along.

"You get right out of town, and you feel like you're in the middle of nowhere, and a lot of people don't know about that," Fields says. "It's a cool experience."

The crew mostly met in various ways through Swede's Fly Shop in the Garland District, and one of the team's tips for anyone who wants to get started is to go hang out there and speak to the owner and regulars about fishing.

Driscoll and Crawford also emphasize that the best way to start is just getting out there, and not being intimidated or afraid to try it.