A local farmer, chef and organizer unite to encourage more female participation in the farm-to-table movement 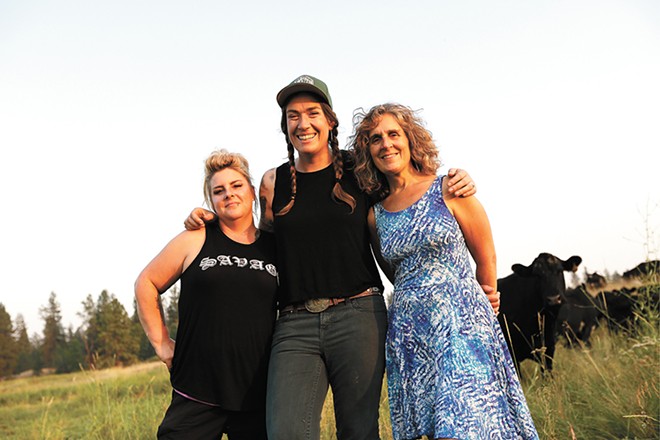 The farmer, the chef and the organizer are three sides of the same triangle;

each has a vital role to play in our food system, from production and distribution to preparation, education, communication and promotion. This triangulation exemplified as the farm-to-table movement (its origin is often credited to acclaimed California-based chef Alice Waters of Chez Panisse) emphasizes local, seasonal, organic ingredients, and building relationships among restaurants, farmers and even the consumer.

"We see [farm-to-table meals] as a point of entry to educating people about their food as much as giving them an awesome dining experience," explains Inland Northwest Food Network founder and executive director Teri McKenzie.

McKenzie founded the INWFN in 2014 to help nurture and spread that vital connection between people, place, food and farms.

The menu for the Aug. 13 event (open to 50 diners) highlights beef-centric items like ribs, and Patrick's spin on barbacoa tacos, with fall-off-the-bone meat and spicy tomatillo sauce. Meat dishes are balanced by garden gatherings; both pickled and charred corn, a sunflower kernel waffle, and cherry sorbet alongside Black Forest cake.

Farm-to-table, says Patrick, is about finding and developing mutually beneficial, rock-solid relationships with farmers and ranchers, and communicating when each are impacted by such factors as weather and crop losses.

It also means "that you work many times harder in an already brutally difficult business to create food you're proud of," says Patrick, whose experience includes C.I. Shenanigans, the former Ella's Supper Club, the Coeur d'Alene Casino Resort & Hotel, Eat Good restaurant and Wandering Table, before it became a brick-and-mortar restaurant.

For Lazy R's Beth Robinette, farm-to-table events like the upcoming collaboration allow her to showcase her family's beef, as well as advocate for change and promote holistic management, which has been practiced at the ranch for the past two decades.

When so many people live and work in human-made environments, says Robinette, "the most profound connection we have with our planet is through the food we eat. It's the only 'natural' thing many people touch in a given day," she says.

Robinette is also a co-founder of LINC Foods, which connects food producers to potential purchasers such as stores, restaurants and educational institutions.

Despite their varied connections to the production of food,

McKenzie, Patrick and Robinette are united in their efforts to promote health and wellness — of the earth, its inhabitants, and its food system — through the food itself.

"What I hope we're doing at the Lazy R is helping connect people back to that sense of place and belonging — that sense that human beings are part of this planet, not in dominion over it," says Robinette.

"We each have the power to influence the kind of world we want to live in," she continues. "Every time we buy food — and most of us make more financial transactions around food than just about anything else — we are saying, 'I want to pay into this kind of system.'"

It's also a system, say the farm-to-table dinner organizers, that remains male-dominated.

According to the USDA, 30 percent of American farmers are women (37 percent in Washington), and they control 7 percent of U.S. farmland, accounting for 3 percent of sales. Regarding chefs, the Census Bureau indicates that men outnumber women nearly 5 to 1 in the profession and earn an average of $6,000 more per year.

"I was called 'stupid girl' for, like, six months," recalls Patrick of her early kitchen experiences.

She's not sure why there aren't as many women chefs, because the necessary mindset and skill set has little to do with gender.

"You're either built for it or you're not," Patrick says, noting that having gender-blind mentors helps.

In her Blackbird kitchen, she's embraced diversity but ultimately wants the best person for the job. Still, says Patrick, when that person happens to be female — and she's known a few kick-ass women in the industry — a little part of her raises a fist in triumph.

She doesn't see gender as a factor. Robinette not only appreciates mentors, she is one. Her New Cowgirl Camp program, running Aug. 28 through Sept. 1, will initially be geared only toward women, training them in basic ranching and farm ecology.

From her vantage point as an organizer, says McKenzie, who has a masters degree in nonprofit leadership, she sees more women than men at INWFN events — cooking classes, discussion groups, demonstrations. She's seeing an increase in women in food industry roles, particularly in activism, which she says tends to be less power-focused and more collaborative and solutions-oriented.

So although the intent of the upcoming farm-to-table dinner is to raise awareness about food, it has — at least for this farmer, chef and organizer — the added advantage of raising awareness about women's growing role in America's food system.

"I really think that it's important that we focus on solutions, rather than just analyzing what's wrong," McKenzie summarizes. ♦