MUSIC | Since their 2003 debut, indie/garage rock band the Kills have been refining their distinctive style and winning fans over with their plentiful personality. The band, comprised of singer Alison Mosshart and guitarist Jamie Hince, went on hiatus in 2013 when Hince suffered a hand injury that necessitated numerous surgeries and forced him to relearn to play his instrument from scratch. The Kills came back full force this year with the release of their fifth studio album, ASH & ICE, on June 3. It's still classic Kills through and through, but some tracks, like the headbang-worthy lead single "Doing It to Death" and the restrained, slow-building "Let it Drop," showcase the band's progression toward a moody, poppier sound.

TV | Fans of AMC's recently ended Mad Men who miss the cold charisma of leading man Don Draper and/or the business intrigue rooted in a historical period should check out the network's tech-centric series HALT AND CATCH FIRE, the third season of which premieres on Aug. 23. Though the show takes obvious inspiration from its home network's acclaimed ad-firm drama, it has enough unique ideas to stand on its own as a riotously fun watch. The series stars Lee Pace as Joe MacMillan, a first-glance Draper-alike who has secrets of his own up his sleeve, as he leads a team that aims to set personal computing on fire amidst the industry boom in the 1980s. Now is the perfect time to catch up on the show's first two seasons — thankfully, both are streaming on Netflix in their full glory. 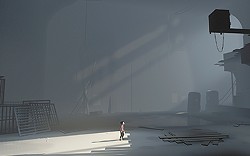 VIDEO GAME | Back in 2010, a small, independent studio in Denmark released a game called Limbo. It was a simple, 2D side-scrolling platformer, but received an enormous amount of attention thanks to its memorably stark visual palette and haunting atmosphere. Finally, on June 29, the developer's second game, INSIDE, hit the Xbox store, with a Windows release following on July 7. Early reactions to the game indicate that Playdead may just have managed to make lightning strike twice. Though it's superficially similar to Limbo, reviews say that Inside is a wholly original experience, and one that's best had knowing as little as possible about it going in. ♦