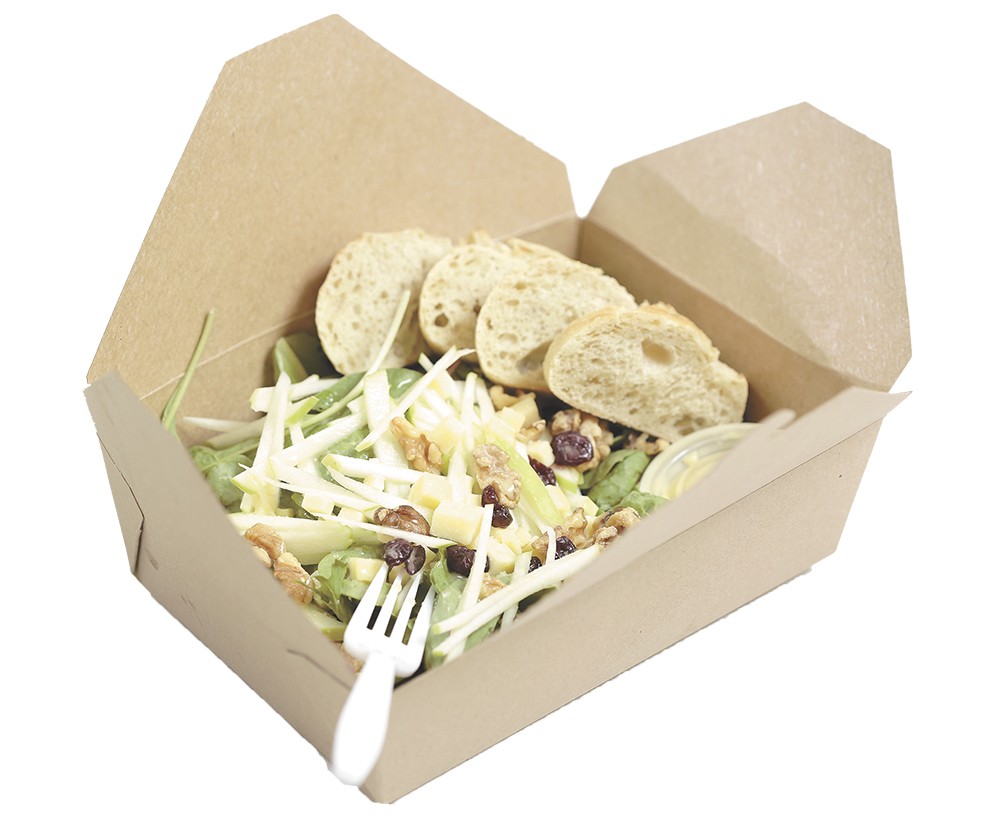 The mighty fork: Arguably the most elevated of all utensils, both for its unmatched versatility and its mysterious ability to go missing en masse from the kitchen at Inlander headquarters. While you can't eat soup with a fork, and surely chopsticks would do the job when the tined tool is absent, the fork as a utensil is a masterpiece of design and practicality. Even when its sharper cousin the knife is lacking, stab those stainless steel teeth into a hunk of meat and gnaw off a chunk with your own, caveman-style. But salads without forks? Truly daunting.

If not for these pointy vegetable stabbers, we'd all be left pushing our faces into our plates like grazing cattle. So next time you're awkwardly shoveling heavily dressed greens down your gullet, appreciate the unparalleled engineering of the fork. When on the hunt for the following meal deals, make sure the fork isn't forgotten. You'll truly be lost without one — especially on the go.

Thankfully for your wallet and your waistline, the salads at METHOD JUICE CAFE (718 W. Riverside; 7704 N. Division), with locations on the Northside and downtown, are healthy, fresh, tasty and affordable. While all of its leafy green options start with a blend of romaine and spinach, the three regular menu offerings include strawberry balsamic, lemon tahini and cilantro citrus — all named after their respective dressings. Small ($5) and large ($7) servings are offered of each, and you'll feel full, but not grossly so, after filling up on the larger of the two. For a light summer lunch, try the cilantro citrus, topped with black beans, tomato, red onion, mushroom, shredded carrots and sunflower seeds. Tossed in a light citrus vinaigrette, Method packs takeout bowls full of good-for-you food.

With options for all three of the day's meals, the Hawaiian fare at ALOHA ISLAND GRILL (1724 N. Monroe; 1220 W. Francis) can satisfy your hankering for teriyaki on a budget any time of the day. Close to downtown, the Monroe Street spot is tiny, but don't be fooled by appearances. The small space allows a team of cooks to whip up the tastiest, most tender teriyaki meats around, while filling orders as fast as the stream of hungry folks pass in and out its doors during the lunch or evening rush. Seriously, it's like a little meat hut of tasty bliss. You can't really go wrong with any of the meat choices — there are vegetarian options as well, including teriyaki portobello mushrooms and stir-fry veggie bowls — but if you want to stick with the classics, try the kalua pork bowl ($5.25) or the teriyaki chicken bowl ($5.25). All options also come in a "plate" size ($11.65 and up) if you're feeling really famished.

While sometimes it does matter if you're forced to eat with plastic versus stainless steel, the savory salads at downtown dining spot MIZUNA (214 N. Howard) don't discriminate against the type of fork in hand. Offering takeout or dine-in eating, Mizuna's lunch menu salads can fill you up in a nice, healthy fashion, while the restaurant's interior atmosphere offers a true fine-dining vibe. Considering that Mizuna is a go-to spot for special occasion dinners in the evening, it feels a little odd to label its daytime salad offerings "cheap eats." It's really all about value. The lunch menu, served Monday through Saturday from 11 am to 3 pm, offers a variety of half- ($5.75) and full-size ($8.75) salads, from a classic roasted beet to grilled ginger tofu and butter lettuce. Let's talk about the highly recommended white cheddar and apple salad, a sweet and savory mix of crisp apples, sliced into delectable straw-like strips, with deliciously tangy cubes of white cheddar sprinkled on top, along with Craisins and caramelized walnuts. Finished off with a citrus-shallot vinaigrette and a side of sliced baguette, this lunchtime go-to is carefully presented whether in a box or on a plate, and you didn't even break $10. Nice.♦

With options in the case changing daily, the salad trio plate at Boots is one of the best uses for a fork we can think of. It's all about variety, and the diverse flavors to be found in the vegan, mostly gluten-free cafe's signature dishes, like the tofu scramble (good any time of the day, not just lunch). With cold salads galore, gluten-free mac and cheese, and the "crazy spicy slaw," making a decision on just what three things to fill your plate with might be the hardest decision of your day.

For those whose favorite meal of the day is breakfast, the options at this quaint North Idaho spot don't get much better. Tucked into a mostly residential area where Post Falls, Hayden and Coeur d'Alene merge together, Chomper Cafe's all-day (daily, 7 am-3 pm) breakfast menu is stacked with forkable omelets ($7.50 and up), scrambles and sweet treats like pancakes, Belgian waffles and French toast. On the lunch side, about a third of the menu is made up of crisp salads ($7.95).

If you're not eating a sandwich off this just-north-of-downtown Spokane spot's breakfast or lunch menu, you're definitely using a fork, perhaps enjoying a salad ($10 and up), a twice-baked potato ($9), stuffed pepper ($10) or the chef's-choice quiche ($9). Anything here can be ordered to be made gluten-free.

This popular breakfast spot serves up all the classics, from its lauded, Southern-style chicken fried steak to omelets, egg scrambles and all the sweet, battered treats you'd ever want to stab your fork into. For those with smaller appetites, there's the two eggs, hashbrowns and toast in the Cottage Special ($5.45). Breakfast-eating champions might want to check out "The King's Omelet," which is made using six eggs, and is stuffed to the brim with fillings ($10.95).

Located just off its namesake northbound arterial, the breakfast and lunch offerings at Maple Street Bistro range from smoothies, wraps, sandwiches, quiche and yogurt cups to a case of tasty, rotating salads — fill up on fruit salad, chicken pecan, kale Caesar, pesto pasta and plenty more. Its easily accessible location is ideal for a quick bite on your way out the door in the morning (there's also a drive-through) or when you're out and about running errands on weekends. ♦

A brief history of... THE FORK

Early traces of the utensil now known as the fork can be found everywhere from ancient Egypt, where primitive forks were used in cooking; to China, which laid dynastic families to rest in tombs alongside bone forks; to ancient Greece, where forks were used as serving utensils. Forks as table utensils can be traced back to the Byzantine Empire, likely the origin of forks' rise to the realm of the commonplace all throughout the Middle East by the start of the 10th century. Forks were introduced to Western culture by the wife of a Roman emperor, who shocked onlookers by dining with the revolutionary instrument at a banquet. As they increased in popularity, forks were met with their fair share of skepticism, being seen by some as showy and unnecessary. In the mid-1800s, however, Germany added the now-typical curve to its forks, and the global community finally accepted the utensil as a superior instrument.