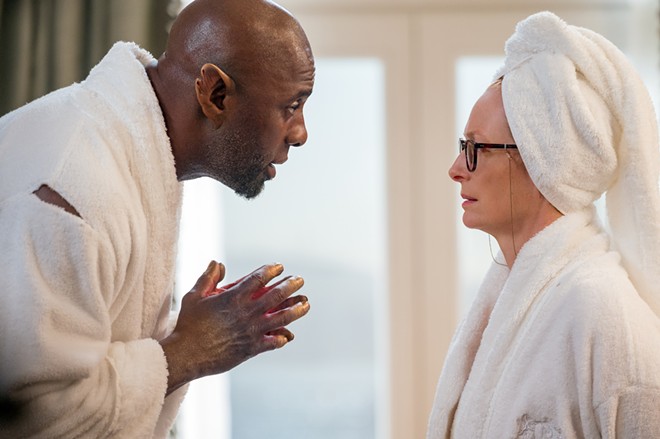 In 2015, writer-director George Miller unleashed his magnum opus, Mad Max: Fury Road, on the world. It was the veteran filmmaker's first live-action film in more than a decade and remains one of the more stunning works of action cinema ever made. Seven years later, he has now followed that with Three Thousand Years of Longing, a passion project that is profoundly flawed yet persistently fascinating in all it takes on.

Adapted from the short story "The Djinn in the Nightingale's Eye" by A. S. Byatt, it is a fairytale of sorts that is told in both the confines of a hotel room and the expansive cosmos that surrounds it. More intriguing in its initial inclinations than in its clumsy conclusion, it is an often vibrant work that gets regrettably tangled up in itself.

The film begins with Tilda Swinton's Alithea, a narratologist on a trip to one of the many conferences she attends to discuss her work in studying stories themselves. She keeps to herself, seemingly content in her loneliness after a past loss that she has hidden away. The character is reminiscent of Swinton's recent performance in the mesmerizing Memoria, especially as things begin to get a bit strange. Alithea accidentally unleashes a djinn (aka a genie), who, as they do, offers her three wishes. The imposing being is brought to life by the typically idiosyncratic Idris Elba, who conveys both gravitas and grace. As the two begin to talk with each other, the film takes us through thousands of years of the djinn's past.

It is in these extended stories that the film is at its best, both visually and narratively. There is a bounty of rich images that Miller captures with a delicate touch, often placing us in the eyes of the djinn who can see more than the human subjects he remains tied to. The stories all echo each other, not just in the looming tragedy that haunts all of them, but in how reflective they are. As Elba delivers monologue after monologue, we begin to understand his character so completely because of how candid he is. While Alithea is distrustful of the djinn and cagey about her own life, the juxtaposition of his openness begins to take hold of her. The third story in particular is the most moving, leaving one wishing the film would have had the confidence to just sit in one room and continue looking back like this. Alas, that was not to be, and it's here where things fall apart.

The film seems to be interested in deconstructing how stories about wishes have a dark side. They usually serve as a "cautionary tale," as Alithea acknowledges early on and plays out in many of the experiences the djinn recounts. Miller himself made such a story with the 1987 film The Witches of Eastwick. Unfortunately, the film rushes into being more conventional in how it deals with this narrative question, leaning into tropes quite heavily. While it follows the basic outline of its source material, the way it pulls it all together feels far too clean and lacking the same depth with which it began. Whereas Byatt's story ends up feeling truthful and appropriately somber, Miller's adaptation does not.

This is a shame as the strength of the film's beginning and much of its middle is one that will continue to shine bright. There is a world in which that more compelling core carries over to its conclusion, though this is not that timeline. For all the parts of the film that are much more poetic and measured, the ending is misjudged in how neatly it all ties up. It cheapens the overall experience, jettisoning the more arresting imagery, themes and emotions for something far more superficial, dampening what could and should have been a dynamic work. ♦