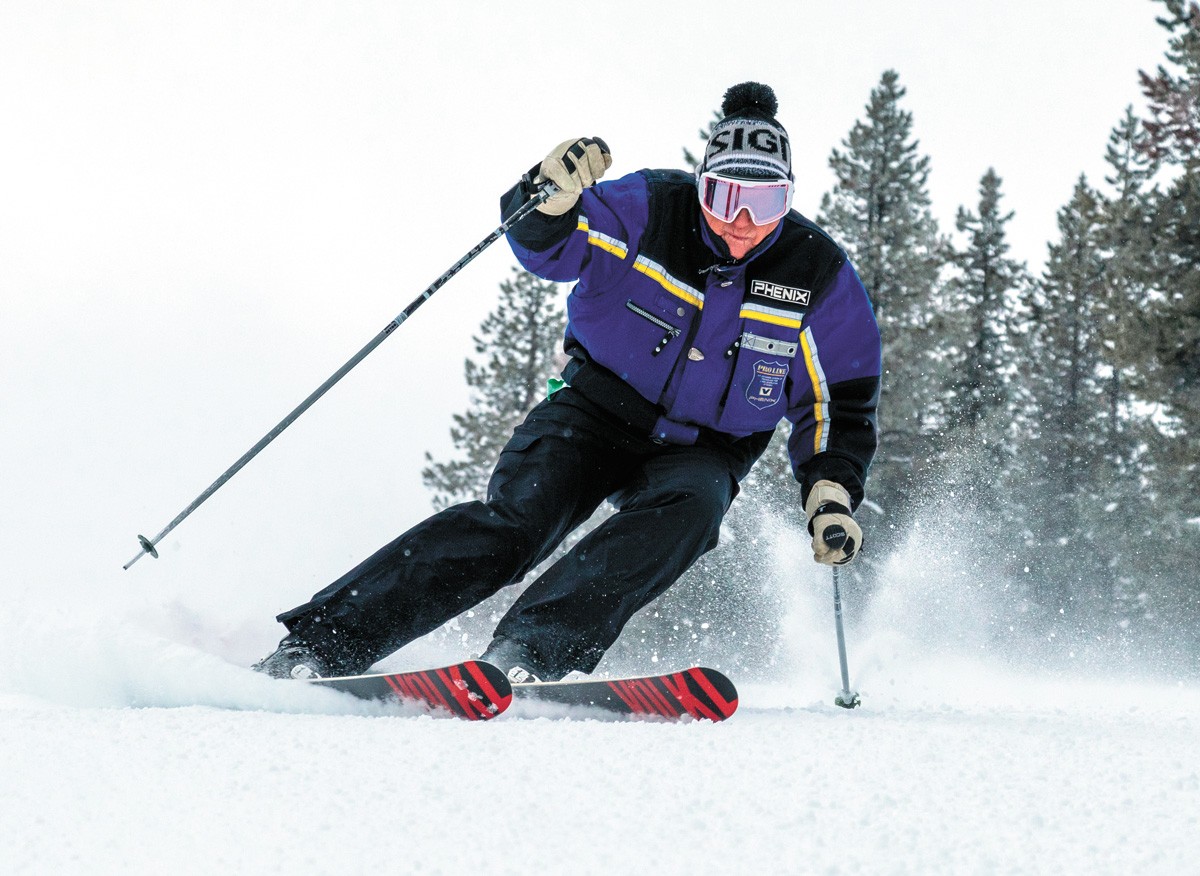 Bob Legasa photo
Gerry FitzGerald can be found most every weekend skiing at Lookout Pass.

"I was in the Navy and we were on a destroyer, we were out at sea, so I was talking to these guys. This one guy — I'll never forget his hometown: He was from Fitzgerald, Georgia. I gave them a ski lesson on the fantail of a destroyer," Gerry "Fitz" FitzGerald says, laughing while we sit drinking coffee one cold morning at Lookout Pass.

He demonstrated the lesson: "OK, hold your feet here. And now walk forward. OK. Keep your hands out here. It was hysterical, but they were into it."

A longtime Spokane resident, Fitz has been coaching ski racing for over 50 years and during that time he's coached well over 500 kids. He's greatly respected and admired throughout the Pacific Northwest ski racing community.

Fitz was born and raised in the rough and tumble mining town of Wallace, Idaho, where his father was one of the town's physicians. "My dad started practicing in Wallace in 1933. The mines were going strong. Lead and zinc and silver was the name of the game. Lots of things going on in Wallace — some things you wouldn't want to talk about in mixed company."

Fitz's father was instrumental in getting the Lookout Pass ski area open. "My dad had a group of guys that thought a local ski area would be nice to have," he says. "That was probably in the mid-1930s that they put this together. There was one rope tow.

"They thought a free ski school was necessary because there were so many kids in the valley that couldn't afford to ski," he continues. "So not only was it a free ski school, but these guys would supply the equipment for a lot of kids, and they even had a free bus ride for the kids to get up the mountain. Over the years, it expanded as you can see from all the pictures on the wall of those kids lined up halfway up the hill."

Fitz's first days on skis date to 1946 at Lookout Pass. "I don't think I liked it initially because it was cold," he says. "My dad drug me up to the ski hill, kicking and screaming, and he would put me out on the hill and tell me to go ski. In those days it was a lot different. Of course, we were riding rope tows. You'd wrap your arms around the rope, and it literally dragged you up the hill. You let go, you fall off. So, I don't think we really enjoyed skiing for the first couple of years until we ran into some friends that were also doing it, then you had fun when you'd come up with your buddies, and we learned skiing's not so bad."

"I ended up skiing with the coach a few different times, and we got along real well. I thought to myself, 'Ski coaching is something I'd really like to do,'" Fitz says.

After college he went into the Navy and was on active duty for two years. He got out in the spring of 1964, and one of the first things he did when he returned to Spokane was go skiing at Mt. Spokane.

"When I got out of the Navy, skiing was still in the forefront of my mind," Fitz says. "I ran into a fella that wanted me to help him with his ski racing program, that was in the fall of 64. Don Gasaway had a ski team on Mount Spokane called Snowflake. He had a ski school, and he had some racers. He asked me if I would handle the racers."

Fitz ran the Snowflakes Ski Racing program for two years. Then in 1966, "the Spokane Ski Racing Association (SSRA) came to me and asked if I would consolidate with them," he says. "I thought it was an awesome idea because I had virtually no race equipment, and we had no real place to train. Because there were two teams on the mountain, we were relegated to a little spot off to the side. So, I put it up for a vote with my racers. I said, 'What would you like to do?' The greater percentage voted to join SSRA. I was tickled to death."

SSRA was serious about their racing program. They had hired a new head coach, LouLou Kneubuhler, who came from France. "Lou and I were the coaches; LouLou was the head coach. That was my beginning with Spokane Ski Racing Association. '66 would be my first season coaching on Mount Spokane, and my last season would be 2016. So over 52 years of coaching, and the main reason I did that, was because of the pension that was attached to it," he says with a sarcastic smile.

Fitz has coached well over 500 hundred kids and is greatly respected by his mentors and athletes. Brandon "Moondog" Moon from Schweitzer Alpine Racing School says, "When I first started coaching ski racing, I learned a lot of my coaching skills by observing others. The best takeaway I ever got was from Gerry FitzGerald: To coach kids you have to act like a kid. And Gerry is just a big kid at heart."

Fitz's oldest daughter, Jennifer, says, "Dad has been a coach to many racers. He was my first coach; he's so talented. He always makes it fun for them. He still carries a bag of Tootsie Rolls to hand out to the kids. He asks them if they've been good. If they say yes, he says, 'Wrong answer!' The naughty stories the kids come up with to get the Tootsie Rolls are hilarious!"

His enthusiasm and his ability to make people laugh kept his young ski racers excited to train. His sense of humor even turned into a tradition among his kids.

Back in his early coaching days, one of his young racers thought it would be funny if they named their ski team Fitz's Alpine Racing Team. "So this kid had a windbreaker, and he put F.A.R.T. in white adhesive tape on the front of it. That's all it was," he says. "I remember his mother told me she went for a walk one morning and threw his coat on; she ran into some of her friends also out walking. They had some questions about this 'FART' on the front of the coat. She had no idea what it was all about, so it became kind of a joke. I had some shirts made up, and I'd give it to kids that did well. They had to earn it one way or the other," Fitz says.

Over the 52 years of coaching kids, Fitz has coached some of his kids' kids. "It's really a scary thought, when you think about it, because some of those first kids I coached are obviously in their mid-60s now," he says.

For over five decades Fitz has stood alongside a racecourse for hours on end with cold feet, in negative temps, and through blizzards and rain. He wouldn't take any of it back. I asked him what he takes away from all those years of coaching.

"Sometimes someone will say, 'Oh, so and so made the U.S. Ski Team.' You know, that's nice, but for me the long-term thing is the kids you've met — who you still talk to. You look back at the letters they've sent you and the relationships you've built with the families. It becomes very personal, and they become part of your ski family. You get Christmas cards, text messages from them, and they ask how you're doing. I think that's the biggest thing I take away from coaching. I miss those text messages."

His biggest accomplishment as a ski coach?

"I think in a nutshell it would be the skiing itself — all these kids hopefully you've helped them learn to ski a little bit better, in all conditions of snow. If you're in a racing program, you learn to ski. You can ski in the crud, you can ski in the powder, you can ski on the ice, you can ski anywhere, anytime, and you can take care of your own equipment. What did I get out of this, when I stop and really think about it? The kid probably knows how to handle himself, and I hope I was part of that."

Jeff Pickering, who went on to coach the Women's U.S. Ski Team, had this to say about his days being coached by FitzGerald: "The meaning of life through a young SSRA athletes' eyes was receiving a F.A.R.T. 'Fitz's Alpine Race Team' shirt. Finally got mine. Gerry, what you need to know is the impact you made on me as a person and as a coach. Individual sports thrive from a team environment. I learned that from you."

Christi Gregorak chuckles when she describes the days when FitzGerald coached her and her friends. "We tortured Fitz with our teenage angst, but those days are among the most formative and favorite days of my life. It's where I learned that all it takes is all you've got. What I've got now, I learned from skiing on FitzGerald's Alpine Racing Team."

Fitz's skiing days have gone full circle now as he spends about 30 days a season skiing back where it all began, Lookout Pass. He can be found most every weekend skiing with his daughter Jennifer, and they can be seen cruising down Huckleberry Ridge or what was originally named Fitzgerald Ridge. Jennifer had put her skis away a few years back but now has a renewed love affair with the sport.

"My daughter Jennifer, who hadn't skied for 20 years, now has a season pass to Lookout. Oh my God. It's a blast. It's so much fun. I have a little trouble keeping up with her," he says with a happy face.

It's refreshing to see this strong family bond and to see the fire that has been reignited through skiing. "Skiing with my dad this winter has been such a gift," Jennifer explains happily. "We both feel like teenagers." ♦

The original print version of this article was headlined "Time Flies"