Get Ready to Shred

Forecasts are calling for a high chance of another La Niña winter, which could mean plenty of snow on area slopes

As local mountains have already started getting their first taste of winter,

eager snow-sports enthusiasts may be wondering if we'll have another excellent winter, and signs are pointing to yes.

As of mid-October, the National Weather Service's Climate Prediction Center said that models were showing up to a 65 percent chance of another La Niña winter, like last year.

"That typically means we will see more snow than normal, and lower temperatures," says Andy Brown, a meteorologist with the NWS office in Spokane.

For this region, Brown says that on average during a La Niña winter, areas see about 120 percent of their normal snowfall, which varies depending on the location.

Last winter, Spokane received 61.5 inches of snow, which is close to the average of 59 inches that falls during La Niña winters.

As more arctic air spills down from Canada and moisture moves in from the Pacific, places that wouldn't usually get snow during a warmer winter can also see more snow, Brown says, adding that the same flow that can bring that snow to the lowlands can bring plenty to the mountains.

"Those atmospheric rivers can stack up, and we'll get more snow up in the mountains as well, which is what happened last year," Brown says.

While mountain passes in Washington and Idaho have already seen the first snow of the season, it's still a little early to know if that will mean a early ski season, he says.

"This next week will be interesting," Brown said on Oct. 16. "We are definitely going to get some rain and high mountain snow, but the snow levels will come up a bit from what they've been the last week or two."

Webcams at five local ski areas showed at least a small dusting of snow over the weekend of Oct. 14 and 15 that had mostly melted by Monday, Oct. 16:

Mt. Spokane Ski and Snowboard Park webcams showed dry, brown ground on Monday, but noted that "if predictions hold true, [this season] should be as epic as last winter!"; Silver Mountain Resort had patches of snow and dry ground under the gondola; Lookout Pass had a solid dusting, with patches of grass showing, in images from over the weekend; Schweitzer Mountain Resort's webcam showed patchy snow, but featured a photo from Oct. 13, when the resort received 5 inches; and 49 Degrees North showed a patchy dusting of snow at the summit, with mostly dry ground under the lifts.

By way of reminder, Brown says he always encourages people to plan ahead for the winter weather to shift, to ensure safe travels.

"Whether we're forecasting snow or not, you know in the Inland Northwest we're going to have some hazardous driving, so be prepared," Brown says. "Know what the forecast is, have the chains, have blankets, plan ahead if you know you're going into a storm, alter plans if you can, and if you can't, be ready to be stuck if you're going to travel during hazardous winter storms." ♦ 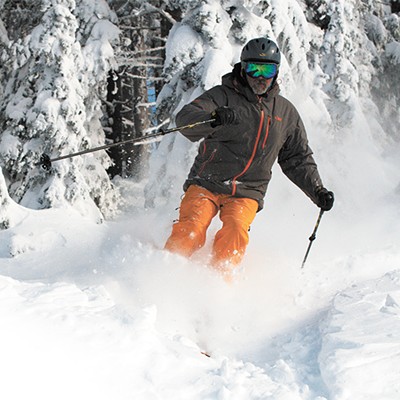 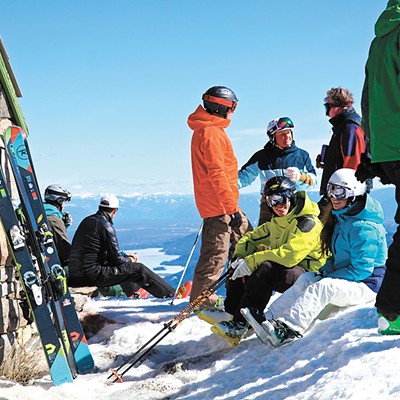