Getting beyond your first impression of dabbing 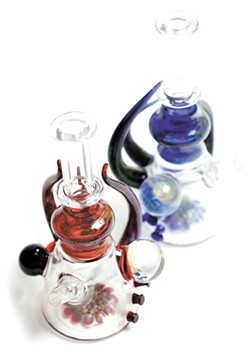 A few years ago, a friend and I were working on a music project at his house. While laboring over a set list, we took a break and went out to his living room littered with his roommates and nearby friends.

I was offered a beer from the guy to the right of me and he then quickly offered some sort of glass contraption and what appeared to be a blowtorch from the left. Immediately, it felt like the hangout became a different kind of party. And my first reaction to a dab rig is hardly unique.

Dabbing is seen by many as an overly aggressive form of getting high, making even the most proud gravity bong holder blush. Why would anyone need to get that high? You're literally using a propane torch... don't you feel dirty? But taking a further look at the mode of consumption, it's hard not to be excited about dabbing's potential.

The quality of high and experience is raised due to the exact gardening that pot farmers are executing throughout the state. Concentrates for dabbing test out in the range of 65 percent to 99 percent THC, exponentially stronger than the THC levels of even the most potent flower.

And due to those high THC levels, you won't be using as much of your product to reach your preferred state of bliss. A regular dabber will use .05 grams (about the size of a cannabis seed) for a hit off of the rig. That small amount, when referring to say a 70 percent THC concentrate, will equate to about 35 milligrams of THC, or three-and-a-half servings of recreational edibles.

Consider that the budding industry's efforts are similar to the amount of care that a high-end spirits company or a small-batch brewery would take in ensuring quality. Concentrate producers will preserve and process their crops into concentrate in an effort to maximize the terpene notes like a brewery will use whiskey barrels to add a special oak flavor to their run of IPA.

A great concentrate will maximize the flavors that you'd expect out of strains, bringing upfront the taste of lemon in Lemon Haze further than any flower had. And the customization of dab rigs only furthers the possibilities.

A traditional system will include a water pipe and a metal piece called a nail replacing the bowl. By being metal, the temperature of the bowl can get much hotter without the fear of cracking or bursting. But the introduction of e-nails unlocks a load of potential for the dabber's experience.

Instead of using a blowtorch, you simply plug in the heating system for the nail into an outlet and dial in the temperature. While definitely an investment — most starter kits are $100 or more — an e-nail allows you to dab at lower temperatures, making the hit not as rough and retaining terpene notes that might burn off at higher temperatures.

Thankfully, any respectable store will point you in the right direction so you'll be able to unlock the future of craft cannabis. ♦