Gina Freuen converted her studio into a live-work space

Many artists find themselves turning a portion of their homes into studios; Gina Freuen did the reverse. After her husband passed away unexpectedly in 2014, Freuen found herself contemplating her life's trajectory. She decided to move out of her Little Spokane River area home — her son and his family live there now — and convert the adjacent building that formerly held her ceramic studio into her living quarters. 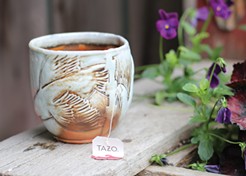 "I have a different perspective from this side of the house," Freuen says. Instead of seeing the massive garden where she spends much of her time in warmer months when not in the studio, she now sees the neighbor's horses and a verdant swath of land alongside the gurgling river-fed creek.

Freuen renovated the 600-square-foot building, cutting back on studio space to create a kitchen and dining area, adding a second floor sleeping area, and plenty of places to showcase art throughout.

Numerous built-in shelves hold her own ceramics, those of former students, and works from her travels, including a trip to Turkey, and from regional artists like Mardis Nenno and Chris Antemann. The walls are covered with works by such artists as Harold Balazs, Robert Grimes, Mel McCuddin and both Freuen's sister Kay O'Rourke, and her mother, the late Dede McKay. 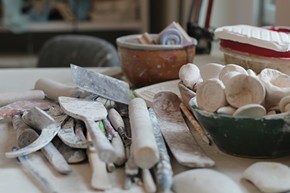 A Gonzaga University instructor for 20 years and longtime artist, Freuen is entrenched in the regional arts community. Right now she works one-on-one with a few students from Mead School District's Riverpoint Academy where daughter Regan Drew worked before the school's closure. She is an exhibiting partner at Trackside Studio Ceramic Art Gallery in Spokane, where she helps manage guest shows.

Freuen also displays work inside her home studio, such as during the annual Little Spokane River Studio Tour in September, which she helped found in 2008. 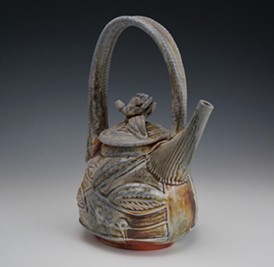 The 12-by-15 studio is light-flooded and well-organized, with a potter's wheel, buckets of glaze, bags of clay and a long central table. "You don't need fancy tools," says Freuen, who does a combination of hand-building and wheel-throwing.

"Sometimes pieces are only wheel-thrown then altered through carving, stamping, kind of a repoussé approach," Freuen says. "Sometimes they are slab-built. Whatever suits the form I am working on."

Freuen's teapots might be the most recognizable of her ceramic work. "I feel like my work has gone way beyond teapots, but I enjoy making them as part of my regular studio regimen," she says. "I like their whimsy and the problem solving decisions that go into making them." 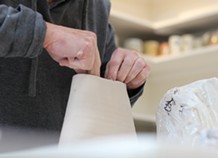 Her studio, although small, has three doors. One leads to the house, the other to the covered slab of concrete where she has several kilns for firing work. The largest is fueled by wood, versus electricity or gas, and it is where she does "soda firing," a multiday firing process that produces unusual and desirable glaze effects.

The third door is a remnant from her former home, a heavy door with pencil marks where children's and now grandchildren's heights have been recorded, a reminder of the importance of family.