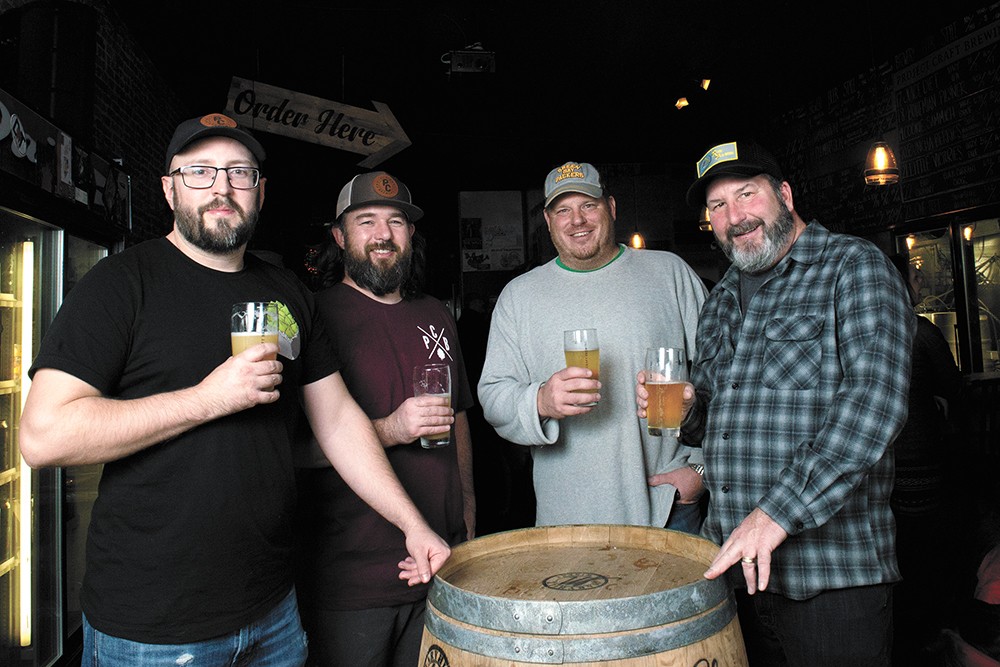 On the west end, the Steel Barrel welcomed its newest tenant, Golden Handle Project. And with the launch of Project Craft Brewing, Community Pint is expanding from a beer bar and bottle shop into a brewery taproom as well.

Golden Handle Project and Project Craft Brewing have both arrived on scene at the end of a year filled with a seemingly endless list of brewery openings. Yet, both businesses are bringing new approaches to running a brewery.

Brewing's been a longtime hobby for Tim Stoltz and Jason Gerstner. The two have a combined 40 years of homebrewing experience, which is partly what led them to open their own commercial brewery.

Golden Handle Project is the newest business to move into the Steel Barrel, an incubator brewhouse with a seven-barrel system that's shared between multiple breweries. It's the fourth brewery to launch out of the downtown taproom, taking the spot of recent incubator alumnus TTs Old Iron Brewery. Golden Handle, however, is different in one specific way.

"I believe we are the first brewery in Washington that's a social purpose corporation," Stoltz notes.

A social purpose corporation is a kind of hybrid between a for-profit business and a nonprofit. For Golden Handle Project, this means a portion of its profits will be directly contributed to biomedical research and education. It's a cause important to both Gerstner and Stoltz. Gerstner is a researcher at Washington State University Spokane specializing in neurodegenerative disease, and Stoltz's grandfather had Alzheimer's.

The latter is one reason Gerstner and Stoltz chose to make their first beer for Ales for ALS, a nonprofit that delivers hops to breweries around the world and, in return, asks for $1 from the sale of each pint made with said hops. Their iteration is a hazy IPA. Next up is a helles lager and farmhouse ale.

The two are both keeping their day jobs for now and credit the incubator brewery at the Steel Barrel for making Golden Handle Project a possibility.

"Having an incubator set up already is a huge step forward," Gerstner says. "They're experienced brewers that we're brewing next to, so all pitfalls that we might've experienced trying to get it off the ground ourselves is lost really."

Golden Handle Project celebrates its official launch on Thursday, Dec. 19, from 5-10 pm, at the Steel Barrel. The Ales for ALS IPA will be on tap, along with one or two other beers.

TJ Wallin opened his beer bar Community Pint two years ago in east downtown. At the same time, he knew he eventually wanted to start his own brewery.

With the help of Adam Keys, another aspiring brewery owner, that dream became a reality. Keys and Wallin partnered together to create Project Craft Brewing. The production-only brewery located north of Spokane in Elk is using Community Pint as its taproom.

It's something this city has never seen before; using an already operating bar as a brewery taproom, too.

"Doing it this way, we have less overhead," Keys explains.

The duo plan to use Project Craft's one-barrel brewhouse to largely focus on current brewing trends and experimental styles. Keys says milkshake IPAs, heavily fruited sours and pastry stouts will shine, with classics like West Coast-style IPAs and lagers thrown into the mix.

"There's never been more new innovations at one time than there is happening right now," Wallin says. "So it's just cool to be able to be part of that." ♦

The original print version of this article was headlined "Brew Projects"