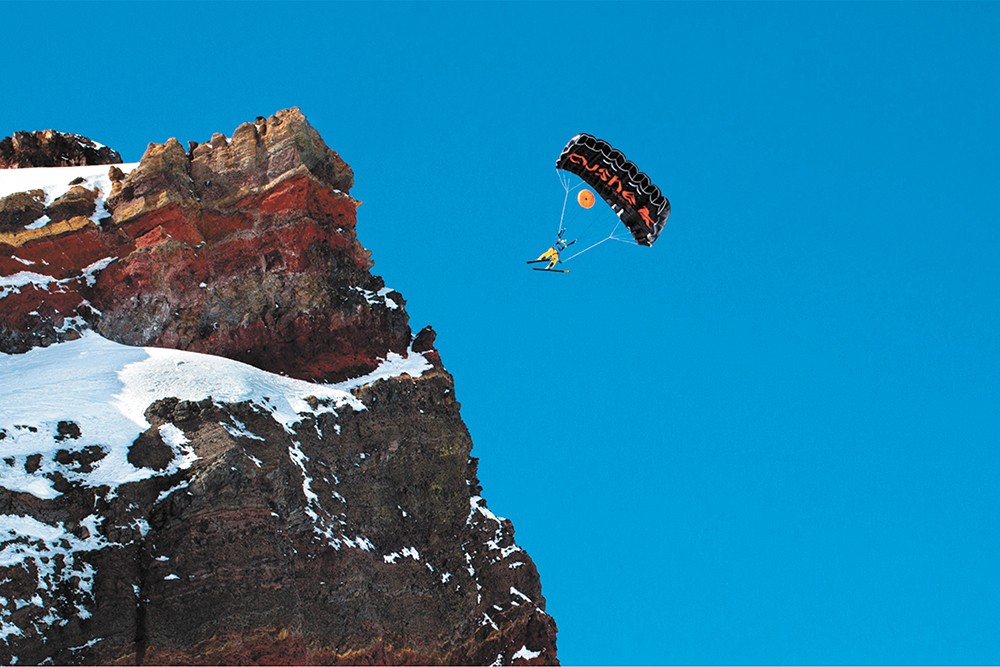 Matthias Giraud skis right off a peak in Super Frenchie.

Even though it's nonfiction, the documentary Super Frenchie follows the arc of a riveting sports drama. We meet a man whose greatest passion is insanely dangerous, and we watch as he's forced to choose between a life of risk and one of domesticity.

It's the first feature directed by Ogden, a professor at Eastern Washington University and a former director of the Spokane International Film Festival, and it closes out this year's SpIFF with a screening on March 6. The film focuses on the gravity-defying exploits of professional daredevil Matthias Giraud, whose primary vice is BASE jumping, an extreme sport in which you leap from a high place, free-fall for a bit and then activate a parachute. Acrophobes need not apply.

Giraud seems to be moving up the ranks within the BASE community, but then there's a crash just days before his son is born, and it forces him to reassess his priorities. This trajectory will no doubt inspire comparisons to 2018's Oscar-winning doc Free Solo: Both films are about men whose very obsessions could kill them, and both feature harrowing footage that might have you digging your fingernails into your palms.

Ogden was a producer for KXLY when he first met Giraud in 2008, who was living in Spokane while his wife attended Eastern Washington University. After filming a segment where Giraud jumped from Mount Hood, Ogden thought there was more to his story. They kept checking in with each other and collecting footage of Giraud's exploits, and Ogden decided to start putting a film together in 2011.

The movie that followed was nearly a decade in the making, and in that time Ogden accrued about 350 hours of footage from more than a dozen sources. A lot of Super Frenchie's most gripping shots come from Giraud's and friends' GoPro cameras, but Ogden and his small crew were at several of the craziest jumps you see in the film.

"It's way different in person than it is on film," Ogden says from Montana, where Super Frenchie screened at the Big Sky Documentary Film Festival. "It's a lot more terrifying. There's a chance your friend could die in front of you, with your cameras rolling."

As he was putting the film together, Ogden says he wasn't sure when he should stick a pin in it. Following Giraud's 2013 accident, he had found a compelling dramatic structure, but he still didn't have a satisfying ending.

"I could only move at the speed of life," he says.

Without giving anything anyway, Super Frenchie does, indeed, have a third act resolution. But it's more than just an epilogue to this particular narrative: It's also the final chapter of a filmmaking saga that began more than a decade ago.

"It's been in the background percolating for two-thirds of my career," Ogden says. "It requires patience and persistence. Over the course of 10 years, there have been times where I thought, 'I'm done with this.' But I felt like there was more story, I just had to wait for it. You have to stay diligent and motivated."

So how does Giraud feel about festival-goers peering into his life?

"He's seen it many times and has seen it with a couple audiences now," Ogden says. "It's hard to see yourself on camera, so no matter how accurate it is to him, there are still some parts I think he wishes were a little more sugar-coated. But he really likes watching it with people and hearing the audience react to it. You hear these open-mouthed gasps." ♦

Super Frenchie closes SpIFF on Fri, March 6 at 7:30 pm at the Magic Lantern Theater. Ogden will participate in an audience Q&A following the screening. Tickets are $12, available at spokanefilmfestival.org.