Juno was about a mature kid; Diablo Cody’s latest is about a woman who never grew up. 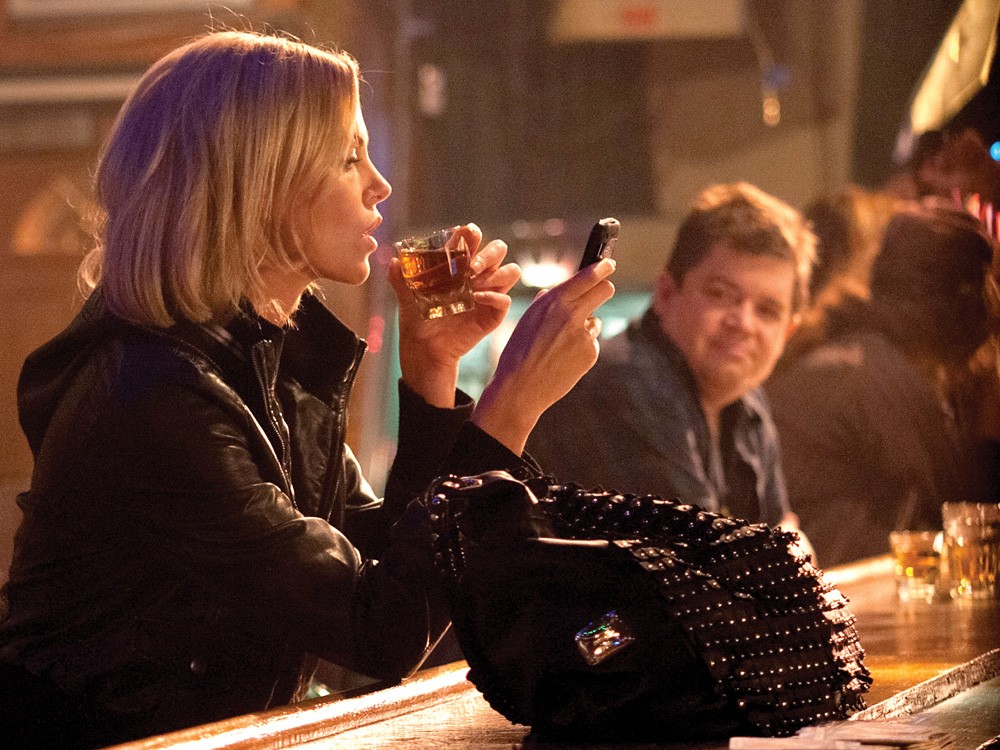 I know this is hard to believe, but Charlize Theron doesn’t look too good in the morning. Let me qualify that. Mavis, the character she plays in Young Adult, doesn’t look good in the morning, especially when she’s had too much whisky the night before, resorts to chugging a bottle of Coke to pop open her eyes, then remembers to take out the falsies she put on earlier to impress some guy from a string of one-night stands.

Mavis is a recently divorced, unhappy denizen of Minneapolis, where she makes a living cranking out ghostwritten novels for and about angst-ridden teenage girls. The big city has been her escape from the Godforsaken little town where she grew up and made many more enemies than friends.

A flash from the past, in the form of a baby announcement, rouses her out of her stupor, but it makes her even less happy. It's from Buddy (Patrick Wilson), her long-ago high school flame, who is now happily married. This somehow lights a fuse in Mavis, making her believe that there’s still a chance at the happiness that’s eluded her. All she has to do is go back to that little town, charm the hell out of Buddy, steal him away from his wife and child, then live happily ever after.

Young Adult reunites writer Diablo Cody and director Jason Reitman, who made the sad, sweet, satirical Juno. This one comes across as a sort of reversal of female leads. Juno featured a teenage girl who was mature beyond her years, and acted like a grownup. Young Adult has a 37-year-old woman who is decidedly immature when it comes to important life decisions, and reacts to problems much like the young characters in her novels.

No doubt about it. This filmmaking team likes to make viewers squirm, laugh about squirming, then get to thinking about the oddball situations they’ve been observing.

Buddy has no clue that Mavis is coming “home,” can’t figure out what’s on her mind when she invites him to dinner, in fact has pretty much forgotten about her, even though he still takes her breath away.

But before that uneventful meeting, Cody and Reitman give the film its soul by having Mavis bump into someone – in a bar, of course – who vividly remembers her: Matt (Patton Oswalt), a self-professed geek whom everyone thought was gay back in high school, and who was beaten to within an inch of his life because of it.

These two characters have nothing in common beyond the fact that they’re both damaged and they share a love of drinking to excess, which opens them up to loose and rather intimate chatter. From the moment they meet, these two actors own the movie, showing off an extraordinary screen chemistry that’s due to Cody’s great dialogue and their terrific delivery.

Oswalt’s wry, offbeat approach to his craft, developed in his standup days and shown to fine effect in his role as Remy in Ratatouille, makes him the perfect foil — a voice of reason — for Theron’s Mavis. But this is also one of Theron’s finest performances, too. She won an Oscar for the monster she played in Monster, but Mavis is a combination of her most nuanced and outrageous presentations.

When Mavis dries out and cleans up her act, she’s gorgeous, but still unattractive on the inside. She’s completely unlikeable, but you probably wouldn’t mind hanging out with her for a beer.

Wait a minute. Maybe even more credit should go to Diablo Cody. She has the ability to turn things from funny to serious without missing a beat. In Young Adult, the director and cast are right in sync with her words.