The Inland Northwest saw record-breaking hazardous air quality over the weekend as a weather system blew smoke from Oregon and California wildfires into the area before stagnating, allowing the heavy smoke to sit for days.

While forecasters with the regional office of the National Weather System initially forecasted that the smoke might start clearing out of Spokane and surrounding areas on Monday, it appears there will be little reprieve early this week. The current forecast shows hardly any wind in our favor before southerly winds could blow even more smoke our direction by Tuesday and Wednesday.

Thick smoke may disperse a bit today with the arrival of a weak front and wind shift. Air quality improvements may only be temporary as winds diminish Monday evening and light southerly winds redevelop for Tuesday and Wednesday. #InlandSmokeWest pic.twitter.com/tFl7m5N50f


Over the weekend, the Spokane Clean Air Agency's air monitoring stations recorded hazardous levels of particles from the smoke and dust in the air for days on end, apparently shattering previous daily records as many businesses opted to close to keep their employees safe.

Air quality is measured in a few different ways, including with the Environmental Protection Agency's Air Quality Index (AQI), which is based on the concentration of fine particulate matter in the air measured in micrograms per cubic meter over a 24-hour time period.

But for quicker updates on rapidly changing conditions, some hourly data is converted into a more predictive up-to-the-hour measurement on a scale that goes up to 500. Under that "NowCast AQI" or "current air quality index" people can quickly see at a glance if conditions are likely good, moderate, unhealthy for some groups, unhealthy, very unhealthy, or hazardous, and take measures to protect themselves from exposure.

Spokane's hourly figures hovered close to the maximum of 500 on that scale for much of Saturday evening and into Sunday, indicating hazardous conditions for everyone. People were encouraged to stay inside as much as possible, advised to limit travel and told to keep windows and doors closed to reduce pollution indoors.

"Once you hit hazardous, it's hazardous. There isn't a 'very, very hazardous,'" explains Spokane Clean Air Agency spokeswoman Lisa Woodard of why the scale maxes out.

Hazardous smoke covered the Inland Northwest, fueled by fires across the West Coast 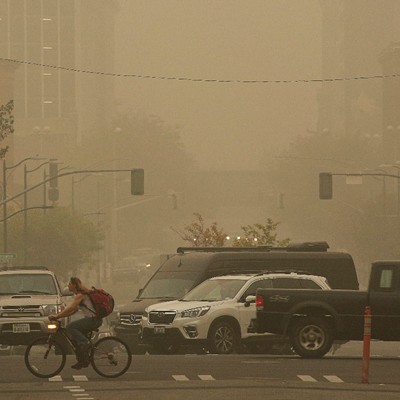 The wildfire smoke that blew in shattered the air quality records for both the daily average AQI and the daily average concentration of particulate matter that is 2.5 microns in diameter or smaller (PM 2.5), which the agency started tracking in 1999. PM 2.5 often includes smoke and other fine particles from combustion.

Before this weekend, the record daily high (since the smaller measurements started in 1999) was on Aug. 19, 2018, with an average AQI of 257. The overall average concentration of fine particulate matter in the air that day was 206.7 micrograms/cubic meter.

This weekend's figures blow that out of the water.

"It's definitely unprecedented," Woodard says. "We haven't had numbers like this for [PM] 2.5 and it hasn't been sustained like this for multiple days."

While dust storms have at times blown in worse air quality for an hour or a few hours at a time — with those larger particles often measured as PM 10 (up to 10 microns across) — this level of sustained smoke in the area is new to the region, Woodard says.

It was also unusual to see the air quality plummet so rapidly.

This go around, the smoke from wildfires that popped up all along the West Coast in a single week created a massive smoke cloud that blew across the state and settled in over the region. Forecasters expect the smoke could stick around through Friday.

As poor conditions continue, the clean air agency is one of the main resources to get information on air quality (as evidenced by a spike in daily users from about 6,000 last Monday to more than 88,500 visitors to the site on Sunday). But there are also other resources including EPA's AirNow (which pulls from local data collected by the agency and others) and Woodard points out you can often even ask your smart home devices.

"Hey Alexa," Woodard says out loud while speaking with the Inlander. "What's the air quality in Spokane?"

"Right now, the air quality is hazardous," the device answers. "Stay inside" it notes while listing other pertinent information.