For the past 33 years, Donnie Emerson had an ace up his sleeve. And even he didn’t know it. 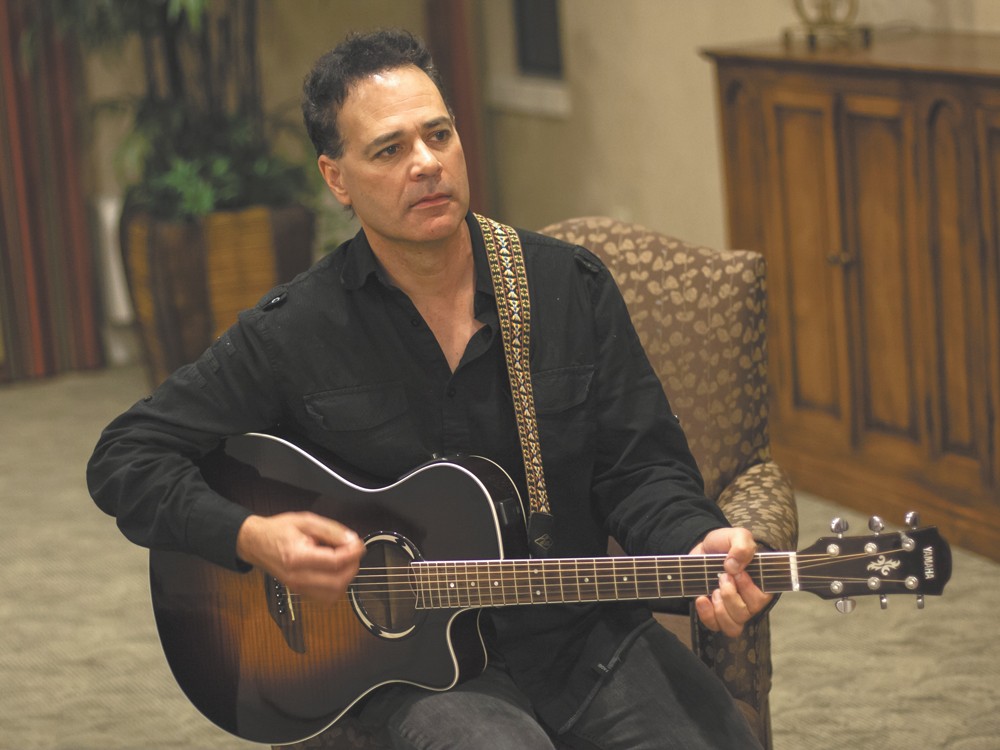 Today, beyond 20 miles of freeway, past a sleepy small town and a sign that reads WELCOME EMERGENCY VEHICLE & OPERATORS, Emerson is barely visible as he sound checks on a dim hotel lounge stage — one flanked by a giant marlin with flames painted on its side, and yards of Hawaiian hula grass. Around him, at tables with chairs on wheels, Friday night patrons chatter as they sip giant ice teas and bottled beers. The smell of a deep fryer fills the air.

When the stage lights come up and Emerson starts singing — a cover of “Stand By Me” — the crowd of 50- and 60-somethings continues to talk, as if there’s no one on stage at all. In a lull between songs, one lady’s faint claps get lost in the clinks of glasses and scrapes of silverware.

But this Post Falls crowd might not know that in the last few months Donnie Emerson has become the toast of the independent music industry for an album called Dreamin’ Wild that he and his brother, Joe, co-wrote and recorded 33 years ago. To them, he’s just a singer in a hotel bar.

Dreamin’ Wild was, until recently, hard to find, too. Most of the copies sat for the last three decades in the basement of the Fruitland, Wash., farm where the Emerson brothers’ parents still live.

The few copies that did get out of that basement eventually landed in the hands of the right people. Like the record collector who bought a copy of Dreamin’ Wild at a Spokane antique shop and posted a blog about it online. His post drew the attention of esteemed Seattle re-issue label, Light in the Attic Records, which re-released the record earlier this summer. The release launched a tidal wave of unexpected attention Emerson’s way.

Suddenly he was getting calls for interviews at his Spokane home from MOJO, Rolling Stone and the LA Times. Los Angeles indie darling, Ariel Pink, called to pick his brain about the album’s hit song, “Baby,” which he covered on his latest album, Mature Themes. Pitchfork.com picked up on Dreamin’ Wild and reviewed it with high marks. Earlier this week, The New York Times flew to Spokane to interview and photograph Emerson for another story.

It’s a lot for Emerson, now 51, to process. Here he is: an overnight star. And yet, still, he’s playing to local crowds who don’t seem to know who he is.

“After [33] years, it’s strange. It’s surreal,” he says of the attention. It’s strange, he says, to have lived an entire life and made a career out of music, and to suddenly be getting attention for songs he wrote as a 16-year-old.

Against a cloudy blue photo backdrop, Donnie and Joe Emerson posed in gleaming white Elvis jumpsuits with jumbo-sized collars. It’s innocent and goofy and reminiscent of another era.

“It is weird looking! That’s how it was back then,” Emerson says, eating a salad before his lounge show begins.

“Back then” was 1979. Donnie was 16, his brother Joe was 18. The pair loved playing music — so much so that their father, Don, built a recording studio for his boys to practice in on the property of their wheat and alfalfa farm.

“We wrote a song a day. Sometimes two a day. We were so inspired to write songs,” Emerson says.

Their album, Dreamin’ Wild, is a record of youthful ballads — songs that are hopeful and big-eyed, and show the brothers’ fascination with big dreams and falling in love. In fact, many of the young duo’s songs are surprisingly emotional anthems for two teenage boys — filled with the fluttery, weightless feeling of being in love. It’s a quality that Emerson says he still has today as a songwriter.

Nancy answers: “I think he was in love with love.”

When their record was pressed, the brothers and their farmer father didn’t quite know what to do with it. The other dozen kids in Donnie and Joe’s farm town school didn’t quite get why they made a record.

“It was like nobody really cared. No one realized how hard it was to just do that. It was no big deal to them,” Emerson says. “A week after we did it, we just put it down in the basement.”

But neither of the Emerson brothers stopped making music — though Donnie says it has been about 30 years since he’s shared a stage with his brother. Joe continues to play guitar and drums in Fruitland. Donnie has toured the world, even playing with his wife in Las Vegas casino house bands.

Today, Emerson says he tries to maintain the youthful optimism that oozes from each of Dreamin’ Wild’s songs.

“When you’re in your youth, and writing ... you’re not obscured by the world. All your true emotions — they’re not tainted,” he says. “But when you’re older, you don’t do that. Your chops get better and your mind loses its youth.”

Emerson says it’s not that he lost hope that he would one day get famous for his songwriting, it’s just that notions of fame stopped concerning him some time ago.

“As a 16-year-old I would have said, ‘Bring it on, I want to see big stuff,’” he says. But today, he enjoys his quiet life. “I don’t want to be famous, I just want to raise my children and play my music. I like small crowds, intimate settings.”

Onstage, during a guitar solo, Emerson trades a smile with his wife, who is jamming away on the drum kit. Still, the audience prattles on.