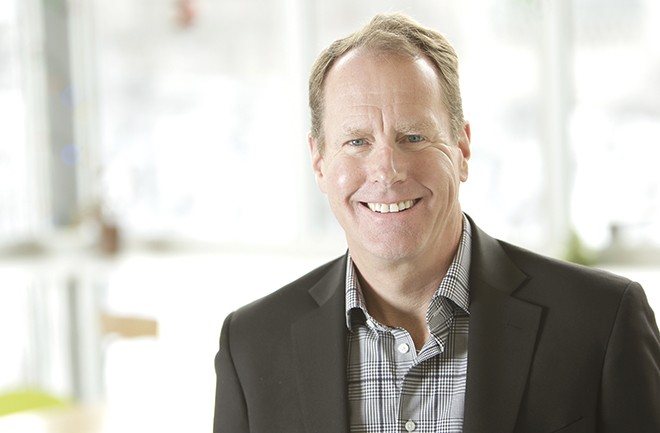 Meet Bobby Enslow, founder and CEO of Indaba Coffee. Enslow is reflective of the phenomenon described in Bo Burlingham's book Small Giants by choosing to be "great instead of big."

Enslow grew up in north Spokane, attended North Central High School and earned an MBA in finance from WSU. His MBA program included a summer internship in South Africa, where he spent three months working with HIV patients and in hospice clinics, observing extreme poverty and wealth next to one another.

Following graduation, he returned to Spokane and lived in the West Central Neighborhood. Enslow's youth pastor and mentor, Dave Wilkinson, inspired him to create a community gathering place in West Central. He was called to action to do something for the city he was raised in. For the next 10 months, Enslow worked on a business plan.

He wanted to create an entity that was for West Central and would serve as a catalyst for change. Enslow's vision was bigger than just selling a cup of coffee. He wanted to be an advocate for the neighborhood and bridge the gap between social divides.

In naming the company, Enslow aspired to a moniker that aligned with a place for all to gather. He chose Indaba, which is a South African tribal term for a "gathering of leaders."

In late 2009, the first Indaba opened in West Central. At the time, according to Enslow, West Central was the poorest neighborhood in Washington. Beyond selling coffee, Indaba also had a "why": transforming the neighborhood.

For the next five years, Enslow operated just the one store. In 2014, he added roasting capacity to be more in line with the craft of coffee and the global community of farmers.

A year later, he shifted his lens from neighborhood to city and he opened a second Indaba across from Macy's in downtown Spokane. Enslow viewed downtown as the "heart of the city," although growing up he saw it as an "urban parking maze that you didn't want to go to." Now, however, downtown Spokane is "cool." Enslow funded the expansion with the proceeds of an Indiegogo crowdfunding campaign.

Shortly after opening in downtown, Enslow was disheartened and shocked when Macy's announced it was closing. He considered his options and concluded it was an opportunity to be on the leading edge of a restoration of the city. "I buckled down, worked from open to close and did not take any pay," Enslow reflected.

His work ethic and community involvement paid off. In 2018, with the financial support of like-minded investors, Enslow has opened four stores — two in Kendall Yards and two in downtown.

Each store has a unique concept. They are designed to be counter to the cookie-cutter model and customized for a specific neighborhood. Indaba's newest store, at 518 W. Riverside, is comparable to a café or bistro that one might find in a larger city.

The new store offers good, everyday drinks at everyday prices in addition to beer and wine. The menu mirrors the Indaba culture of bringing rich and poor into the same space with mutual respect. "Radical hospitality can draw people together; sharing food and drink is a common human trait," says Enslow. Instead of having a happy hour, the store aspires to be happy all the time. Enslow is going to take a one-year pause before opening any more stores. He wants to ensure he can maintain Indaba's "mojo" — its connection with employees, customers and the community.

In Small Giants, Burlingham identifies several common threads shared by companies like Indaba. They want to earn a good return on investment, but it's not their only goal. They are also interested in being great at what they do, creating a great place to work, providing great service to customers, having great relationships with suppliers, making great contributions to the communities they live and work in and finding great ways to lead their lives.

Somehow these companies manage to retain their mojo over time. They haven't accepted the standard menu of options as given. They allow themselves to question the usual definition of success in business and to imagine possibilities other than the ones we are familiar with. And they contribute to the quality of life any modern American city must create to thrive in the 21st century.

With overwhelming media focus on large, publicly held companies, never-ending pressure to increase quarterly earnings, and massive amounts of capital raised by privately held unicorns, it's inspiring to remember that many companies prosper and succeed by prioritizing nonfinancial metrics.

Indaba isn't the only small giant in Spokane. There are others. Seek them out.♦

The original print version of this article was headlined "Small Giants"