Homes are being built the fastest in many flood-prone areas, study finds 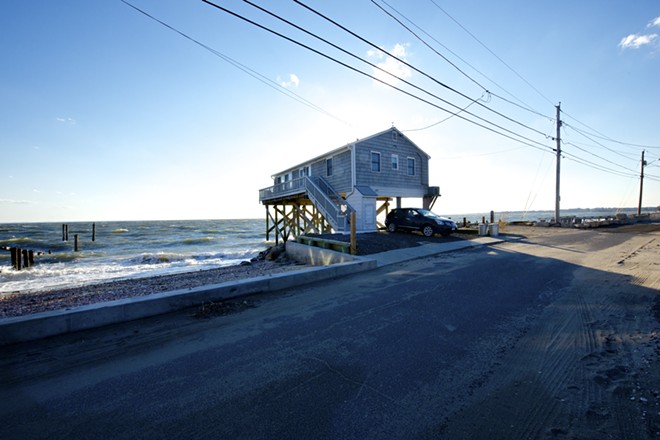 In many coastal states, flood-prone areas have seen the highest rates of home construction since 2010, a study found, suggesting that the risks of climate change have yet to fundamentally change people’s behavior.

The study, by Climate Central, a New Jersey research group, looked at the 10-year flood risk zone — the area with a 10% chance of flooding in any given year — and estimated the zone’s size in 2050. Then the group counted up homes built there since 2010, using data from Zillow.

For eight states, including Connecticut, Rhode Island, Mississippi and South Carolina, the percentage increase in homes built in the flood zone exceeded the rate of increase in the rest of the state.

There are many reasons construction persists despite the danger. In some cases it is urban sprawl, in others it is a desire among government officials for property-tax revenues. But whatever the reason, this kind of building activity will “come back and bite,” said Benjamin Strauss of Climate Central.

The researchers’ objective was to examine “the riskiest of the risky places” — those that “actually would predictably flood multiple times in the course of one mortgage,” Strauss said. “Even in a time of growing climate change awareness, lots of towns are building fastest in the riskiest places.”

There is overwhelming scientific consensus that rising temperatures will increase the frequency and severity of coastal flooding.

Building in the very areas that will predictably flood creates two problems, according to Larry Larson of the Association of State Floodplain Managers. The first is financial: As flooding eventually exceeds what the houses were built to withstand, homeowners will face rising insurance costs.

“Their flood-insurance premiums are going to skyrocket,” Larson said. “It’s not going to be pretty.”

The second problem is safety, both for residents and emergency workers. “If that water rises, they’re going to have to send rescuers in there to get them out,” Larson said.