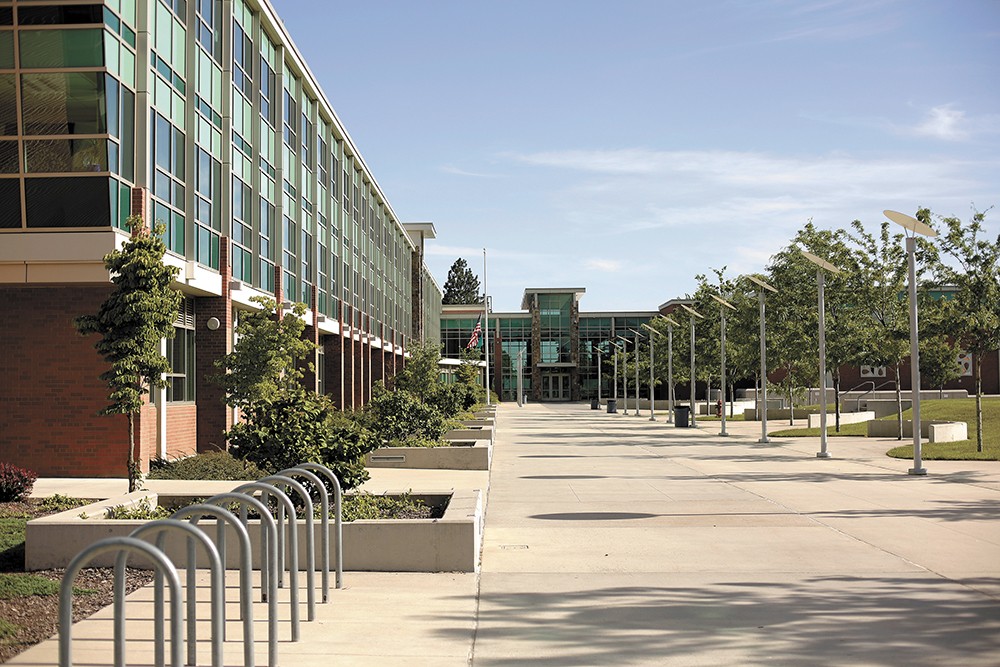 When police and firefighters entered the "isolation room" at Shadle Park High School in November 2018, they saw scratches and dents on the inside of the door — evidence someone had desperately been trying to get out.

Katie Pope, a severely autistic 15-year-old, was in the isolation room for more than an hour, according to school records provided to the Inlander by her father, Richard Pope. Inside the dark room, Katie repeatedly banged her head against the door window. When paramedics arrived, they rushed her to the hospital and checked for a concussion.

Her teacher, Michael Henry, wrote in a report of the incident that "Katie broke an iPad with her face and slammed into the quiet room door repeatedly."

This wasn't the first time Henry, a special education teacher in Shadle's ABLE (Autism Behavior Learning Environment) classroom, would put Katie in the isolation room, where she showed a pattern of harming herself. And it wouldn't be the last. Between May and December 2018, Katie went into isolation more than a dozen times. In several instances, police were called. Three times, she had to go to the hospital.

In response to a complaint from her father, the state Office of the Superintendent of Public Instruction found on May 10 that the district was "in violation" of isolation guidelines for not considering other de-escalation techniques and for making the isolations last too long.

"Here, tragically, there were several isolation incidents where [Katie] was injured while in isolation..." the report says. "If restraint or some other form of behavior intervention had been used [Katie] may not have been injured or needed to go to the hospital multiple times."

Not mentioned in the report, however, are allegations that Henry abused students before he was hired by Spokane Public Schools in 2016. At Mead School District, where Henry was a football coach at Mt. Spokane High School and a special education teacher, Henry was investigated for using excessive force and inappropriate language with students in 2015. He resigned before that investigation was able to be finished, records indicate, and was then hired at Riverside School District. But there, he was given a written reprimand for calling a student a derogatory name.

Michael Henry is the husband of Katy Henry, the president of the Spokane Education Association, the teachers union. Neither responded to multiple phone calls and messages seeking comment.

In January 2015, when Michael Henry was a teacher at Mead's Mt. Spokane High School, a paraeducator who worked for Henry filed a formal complaint alleging Henry sexually harassed her. The woman said Henry would not stop texting her and that he made inappropriate comments. 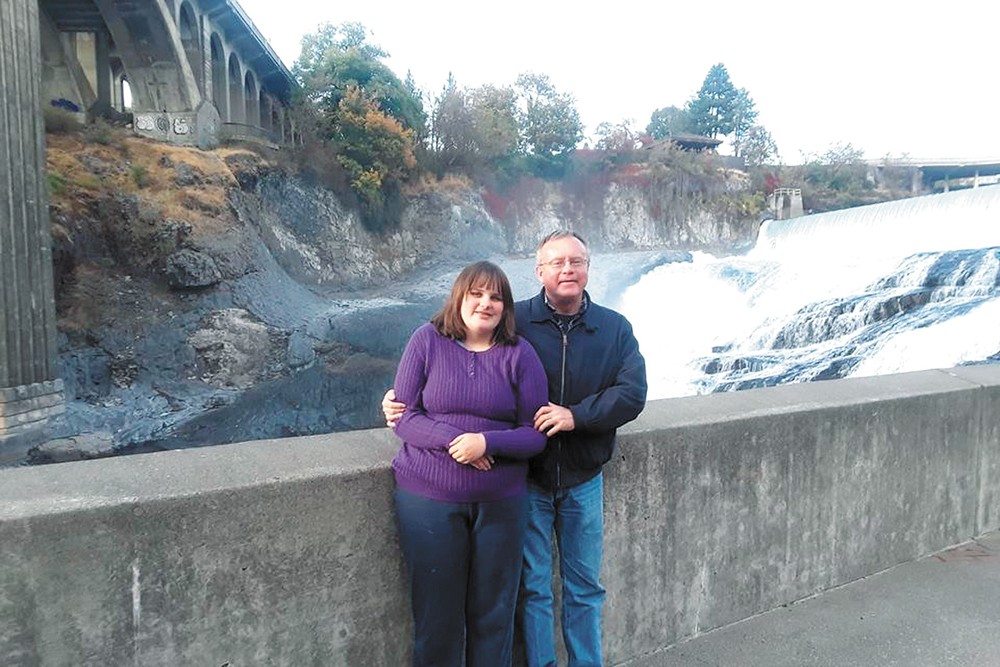 Young Kwak photo
Richard Pope (right) pulled his daughter Katie (left) out of Shadle because of how she was treated.

Shortly after she filed the complaint, she filed a restraining order, saying she was worried Henry would harm himself and she was "worried about my safety." Eventually, the woman took a job at a different school as a result of his behavior, records show. Reached by the Inlander, the woman declined to comment and asked that her name not be included in this article.

The investigation, conducted by principal Darren Nelson, found that Henry violated district policy and that "it created an intimidating or threatening work environment," records show. Superintendent Tom Rockefeller, in a letter to Henry on April 23, 2015, wrote that "appropriate corrective measures will be implemented" to prevent these behaviors in the future.

But already, another investigation was underway involving Henry. Henry had been put on administrative leave a week before that April 23 letter. Another paraeducator who worked in his classroom claimed Henry created a hostile work environment. And that included mistreatment of students.

"Mike manhandled a student inappropriately," the employee wrote. "I took the Right Response training and knew that restraints on a certain student [were] abusive. Mike excessively shoved him into a padded room. Mike slammed him into a wall and called him an idiot."

Several employees were interviewed as part of this investigation while Henry was on paid administrative leave. But the investigation, records indicate, was not concluded before Henry took another job at Riverside School District. And despite the finding of sexual harassment and investigation of physical and verbal abuse of a student, Nelson gave Henry a favorable letter of recommendation, not mentioning any of the investigations at all. Nelson wrote that Henry used paraeducators as "true resources" and praised his "strong instructional skills and a sincere commitment to students and their learning."

Mead School District directed Inlander questions to the director of human resources, Keri Hutchins, who would not offer any specifics on investigations involving Henry.

When a school district believes a code of conduct violation has occurred, it is required to send a complaint to the state Office of Professional Practices, says OPP director Catherine Slagle. Other school districts are then able to check if a teacher is being investigated.

But the first complaint OPP received from Mead regarding Henry was in February of this year, even though Henry hasn't worked there since 2015. Slagle says she's not sure how often districts fail to report potential conduct violations. As a result, school districts may not know of alleged abuse by a teacher when hiring them.

"We don't know what we don't know," Slagle says. "I think it probably happens more often than we wish it would."

Following the February complaint, the state Office of Professional Practices opened an investigation of Henry's alleged abuse of Mt. Spokane students in 2015.

After his employment with Mead, Henry was hired by Riverside School District as a special education teacher before the start of the 2015-16 school year. Ken Russell, the Riverside superintendent who joined after Henry had already left, says the district did not know of any investigations involving Henry from his days at Mead.

"There was no information like that. No records or anything that followed Mike Henry into his hiring at Riverside," Russell says.

Other than OPP investigations, Russell says the hiring process can weed out teachers who have some kind of misconduct on their record. Questions on applications can catch many issues, for example.

Henry's application to Riverside didn't include a question about whether he had been placed on administrative leave, Russell says. And in fact, the state Legislature just passed a bill that bars school district applications from asking that question.

In February 2016, Henry was given a written reprimand by Riverside High School principal John McCoy for calling a student a derogatory name, even after Henry noticed it bothered that student when others called him that, records show. (The records redacted specifics about the name used.)

Henry resigned a month later, effective at the end of the year. In August 2016, just days before the start of the school year, Spokane Public Schools offered him a job as a special ed teacher, where he would teach in the ABLE classroom at Shadle.

Spokane Public Schools wasn't aware of any allegations from either of the previous two districts, says district spokesman Brian Coddington. Spokane Public Schools placed Henry on leave after the incidents at Shadle, and Coddington says that Henry has resigned effective June 13. The district will not continue its investigation of Henry in light of his resignation, Coddington adds, but "information gathered has been shared" with the state.

When Richard Pope requested and viewed the body-cam video showing teachers discussing his daughter Katie being locked in the isolation room, he became determined to find out everything he could about the teachers who let that happen.

"That mortified me," Pope says. "Just the idea that she would have been kept in there after she was injuring herself. [Henry] said she was hitting her head against the door hard enough to break bones in her face."

Pope has now enrolled his daughter at Interlake High School, in Bellevue, closer to where he lives. He acknowledges there can be challenges with Katie's behavior, but so far in Bellevue, she's been doing better than she was in Henry's classroom.

"It's nothing like she had in this situation," Pope says. "We don't have her banging her head against stuff with tremendous force." ♦

The original print version of this article was headlined "Unchecked"