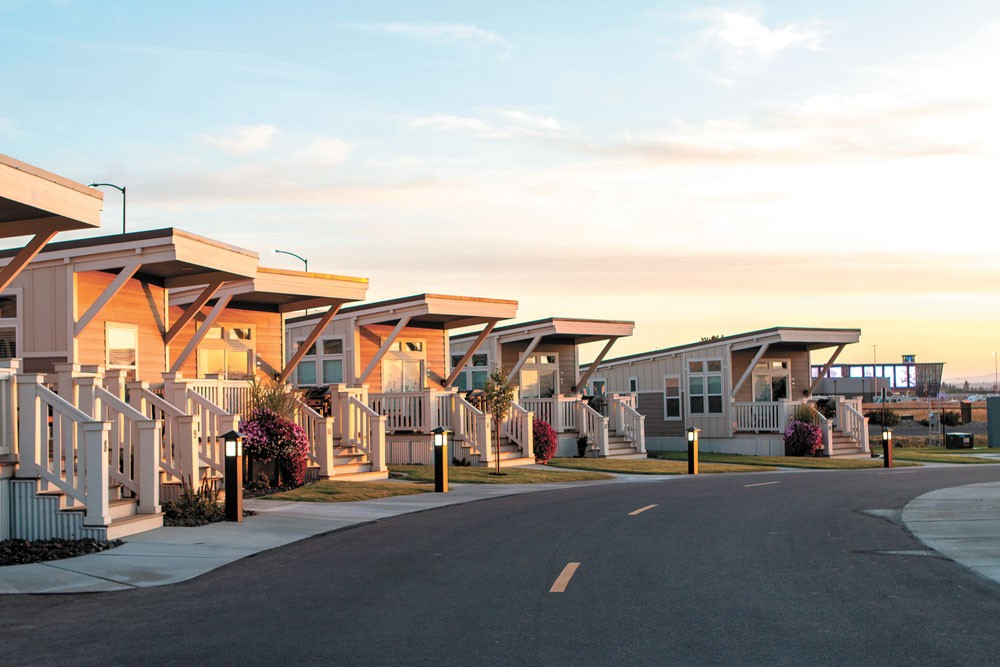 In March, COVID-related closures were still making headlines as our region tried to wrap its collective mind around what was coming. While some parts of the hospitality industry, namely restaurants, are now navigating new terrain of social distancing and mask mandates, other segments, like travel and tourism, are still in pivot-mode. Their road back to recovery means moving forward with equal parts caution and kindness.

Nationally, for example, 2020 travel industry losses are expected to total more than $502 billion, according to reports shared by the Events Industry Council and U.S. Travel Association. That's nearly 6 million jobs and $62 billion in tax revenue lost from coast to coast.

In the Northwest, the trickle-down effect of COVID-related closures and postponements has been keenly felt, from Spokane to Sandpoint and Coeur d'Alene.

Group business is down, says Nick Pierre, general manager of Northern Quest Resort & Casino, and has shifted to "more leisure travelers within driving distance who are looking for a safe place to get away and relax during these stressful times."

The upside has been its RV resort, Pierre says. "With many people working from home and unable to travel out of the area, the occupancy at our recently opened RV resort has increased significantly for both RV spaces and cottages."

Spokane-area tourism is a $1.3 billion industry, she notes. The cancellation of 60 conferences since March, when Gov. Jay Inslee instituted a lockdown, equates to around $34 million in lost business, Hudson says.

That number doesn't include events outside Visit Spokane's involvement, she says, like Bloomsday or the NCAA men's basketball tournament.

The impact of the pandemic goes beyond numbers, however.

"From ticket takers to wedding planners to the CEOs of multinational hospitality companies, they have all had their way of life disrupted and the viability of their livelihood put in question," Hudson says.

Visit Spokane includes itself in the fallout. A nonprofit funded by both private and public sources from membership to lodging taxes, Visit Spokane reduced staff by nearly 70 percent, although they've brought some staff back on reduced hours.

Sandpoint's Chamber of Commerce has felt the pinch, too, says chamber president and CEO Kate McAlister, who is also a City Council member.

"Some businesses, and we understand, cannot pay their chamber dues," says McAlister, describing the ripple effect of event cancellations like Lost in the '50s, the CHAFE 150 bicycle ride, the Long Bridge Swim and Festival at Sandpoint.

"With other states being still closed, we have had a tremendous amount of visitors from all over the U.S.," McAlister says. Many are first-timers to Sandpoint or Idaho in general and from as far away as Texas and Maine, although many are from Washington.

Young Kwak photo
The cancellation of 60 conferences since March equates to around $34 million in lost business.

North Idaho had relatively low case counts prior to its May 1 reopening. At the end of April, for example, Bonner County had only three reported cases, although Kootenai County was climbing with 59. That's well below Spokane's count of 349 around the same time, but it's a larger, denser area.

Overall, however, Idaho had a lower case count and had already allowed gatherings of 10-or-less when it transitioned to Phase 2 two weeks later, reopening restaurants, gyms and recreation facilities. On May 30, bars and large venues reopened during Phase 3. Idaho entered Stage 4 mid-June, allowing any size gathering and the reopening of nightclubs.

Idaho case counts are on the rise, however. As of July 24, Bonner County had 123 positive test cases, a significant increase from three months prior, yet with no deaths. Kootenai County had 1,240 positive cases, however, prompting Panhandle Health District to issue a countywide mask mandate effective immediately.

Just across the border in Eastern Washington, the end of June saw record high case counts, 40 percent of them amongst 20- to 30-year-olds, and a statewide mask mandate enacted June 26. The governor recently imposed additional restrictions on some locations and events, leaving Spokane stuck in Phase 2 of reopening.

That has presented challenges for Alderwood RV Express in Mead, which has 96 sites and an amenity-rich facility they've had to curtail.

"This summer we have had to limit the shower, laundry and store hours to one [person] from the same site," says desk agent Jason Orahood. Although their playground was allowed to reopen during Phase 2, their lodge with a big-screen television and pool table has restricted capacity and the heated indoor pool remains closed.

Similar to Spokane's COVID-reduced hotel occupancy rates, Alderwood experienced a big drop in the spring. In May they were down 30 percent compared to last year, yet now down only 7 percent from July 2019, with long-term reservations piling up for the fall.

Meanwhile, the RV industry is experiencing a nationwide resurgence.

RV sales are booming, reports RnR RV Center's Sharon Ensley, who works in the finance department. Sales are up 37 percent from the same time last year, Ensley says, noting the average age of RVers has dropped.

Indeed, industry websites report that although the majority of RV buyers are ages 35-54, interest amongst millennials is rising rapidly.

Besides RVs and camping, travelers appear to be taking advantage of a dense vacation rental market.

Airbnb, for example, reported that unlike hotel occupancy, U.S. bookings increased from May 17-June 3 compared to the same time in 2019. They also noted a shift towards localized travel — within 200 miles of a customer's home base — and more properties coming online since the pandemic began.

For Callie and Stu Cabe, that trend has been a lifeline. Both active with Coeur d'Alene Summer Theater — she is an actor and director, he is its (unpaid) artistic director — they've been out-of-work since spring and were counting on their downtown vacation rental for income. Events like Car D'lane and Ironman are big for them, as are weddings.

"If we come to the pandemic, we lost almost all of our bookings... as of April and into early May," says Stu, whose paying gig as a motivational speaker focusing on anti-bullying has been hit hard, too.

The Cabes have since regained 90 percent of their bookings, getting a boost during Idaho's Stage 3 when Oregon and Washington were still closed.

Because they utilize a commercial rental company's platform, they don't have a lot of flexibility in how they reach customers. What they do have, Callie says, is kindness. Their cancellation policy, for example, is very lenient, while their cleaning protocol is very strict, including gaps in between rentals, airing rooms and rotating bedding.

When the couple tested positive for COVID in early July, they were stunned but persevered, hiring a cleaning crew out-of-pocket and focusing on their own health.

"We're pinching every dollar but not to the point where we would do anything to compromise [guests'] health," Callie says. Although the couple has been forthcoming about their exposure, Callie is still concerned about blowback.

"We always have the opportunity to educate," says Callie of their candor and insistence on masks, which they're providing free to guests.

"Stu and I feel like it's our giveback," she says of their kindness-centered business approach, which has yielded many repeat customers over the past five years. "We're playing the long game."

So is Sandpoint, McAlister says. "Long-term plans are to learn from all of this, take care of each other and know we are all in it together."

The Sandpoint chamber also created a second newsletter with employment opportunities for any local business.

"A rising tide floats all boats," McAlister says. "If we can help, then we will."

They've also adjusted their outlook online. "For tourism marketing, we made our ads more aspirational, a little zen to give planners some calm," McAlister says. "Letting [visitors] know, when they are ready to travel, we will be here to greet them."

Spokane has a similar approach, yet Hudson acknowledges the road back will be long.

Until then, she says, "We are living by the slogan, 'Spread kindness, not COVID.'"

They also encourage people to support local businesses and be safe, which means being mindful of gatherings.

If everyone does their part to slow the spread, Hudson says, the region will be that much closer to welcoming events, conferences and visitors back. "These are challenging times, but we feel confident that collaboration is critical in the road to recovery." ♦