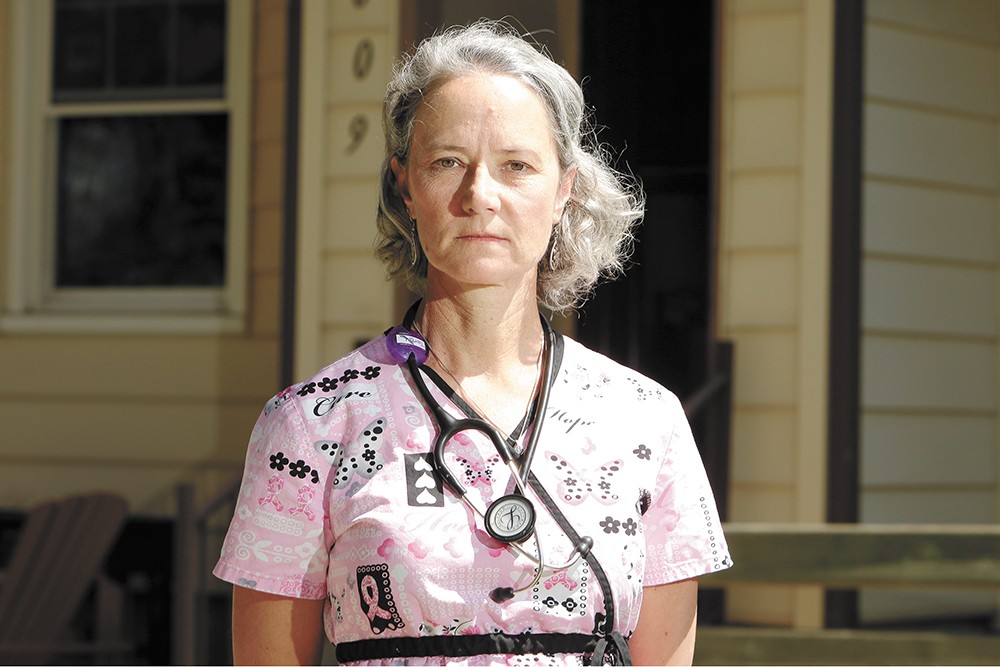 When nurse Tara Lee went to work on March 14, she felt like there was an enemy coming that she wasn't prepared to fight.

Lee, diagnosed with an anxiety disorder and depression, could feel her anxiety building up. It wasn't just that Spokane confirmed its first cases of coronavirus that day. It wasn't just that the week had been a whirlwind of news about school closures, canceled events and deaths adding up in Seattle.

What overwhelmed her was logging into a patient's chart and seeing a banner that said her patient might have symptoms of the coronavirus. There weren't enough resources to test for it. And having recently recovered from pneumonia, Lee felt vulnerable.

She hasn't been back to work at Providence Sacred Heart hospital since. She had to call in sick for her next shift because, as she puts it, "I woke up with the worst depression I've ever had." For weeks she took medication every night just to be able to sleep. She repeatedly called a suicide hotline. It took weeks for her to feel like herself again.

Since the pandemic hit Washington, most front-line workers in health care, mental health and public safety have been expected to keep working despite the risks to their own health. Yet, as the public looks to those workers to protect them during the pandemic, many don't feel protected themselves. And local experts say it's taking a toll on their mental health.

While Spokane hasn't seen the mass deaths and overrun hospitals that have traumatized health care workers elsewhere, there could be "between 2 million to 3 million" Washingtonians whose behavioral health will be adversely affected by the pandemic in the coming months, projects Kira Mauseth, a clinical psychologist and instructor at Seattle University. And front-line workers, she says, remain "uniquely exposed" to situations causing anxiety, stress, depression and post-traumatic stress disorder.

"There are higher risks any time we're talking about a situation where personal safety might be threatened," Mauseth tells the Inlander.

In 2011, two years after Lee became a nurse, she'd begun to lose weight and have trouble sleeping. When her friends pulled her aside and urged her to get help, she did. But she didn't tell her co-workers.

"There was so much shame and guilt surrounding my depression because I had such a good life," Lee says. "I didn't feel like I deserved to be depressed."

Then she started developing anxiety. She was diagnosed with a panic disorder, a type of anxiety disorder that causes panic attacks. As a nurse, she'd watch patients die. She'd talk to parents who just lost their child. Yet, through the years she realized she could manage her anxiety with therapy and the right medication. Usually, however, her anxiety is the worst when it's tied to her own physical safety — driving in cars, heights, wind storms.

And that's what was different about COVID-19, she says. Weeks before that day on March 14, she had pneumonia. So when coronavirus came to Spokane, she didn't know if she could protect herself.

"Now I'm back at work with compromised lungs, and I'm working with co-workers who were also compromised," she says.

As she tried to recover from her depression, she would see the signs around town thanking health care workers and calling them heroes. And that made her feel guilty.

"A huge part of my depression was my guilt for not being on the frontlines," she says. "Every time I saw things that they were doing for health care workers I would start crying. I was like, 'I should be there for my team.' I felt so guilty."

Ryan Pursley, an emergency medicine physician in Spokane, says he relates to what Lee might have felt in mid-March. He's used to compartmentalizing the disturbing things he sees in the emergency room and working under intense stress. But the coronavirus felt different.

"That fear of the unknown was a big factor for everybody," Pursley says. "If you know what it is and what you're dealing with, you go into normal work mode and deal with it. Not knowing how contagious it was, how much it was going to accelerate, all those unknowns were very stressful."

After a while, Pursley says, he came to accept that this is the new normal at work. But he still worries about spreading it to his family. As a precaution every day, he changes his clothes in the garage multiple times and showers before seeing his family. Some health care workers and firefighters have isolated themselves completely from their family.

"As far as the fear of catching something, I've never felt that level as with the coronavirus," Pursley says.

On top of that, front-line workers have lost coping mechanisms to manage their stress, just like the rest of the population. Similarly, the restriction on elective surgeries cost many local health care workers their jobs.

"Not only has their ability to manage stress been compromised," says Dan Barth, director of business development for Inland Northwest Behavioral Health, "but they've been enduring financial duress just like everybody else is."

THEY HAVE EACH OTHER

Patients may not come in seeking medical care for coronavirus at the Inland Northwest Behavioral Health (INBH) intake department. But the workers there are on the frontlines of the crisis nonetheless, says Julie Hall, director of intake for INBH.

In isolation at home, people may be too paranoid to leave the house and get their medication. That can lead them to INBH, where employees wearing cloth masks screen patients at the door. Lately, the psychiatric treatment center has seen a surge in acute psychosis, with a 12 percent increase in patients involuntarily committed there in the last six weeks, Hall says.

"We're not designed like a medical hospital to treat patients," she says. "But the exposure is still there."

And experts expect behavioral health issues in Washington to increase over the next year. It's similar to any natural disaster, says Mauseth, the clinical psychologist in Seattle. Except the pandemic keeps happening.

Mauseth projects it to follow a pattern over the course of the year. In March, it was common for people to feel anxiety or panic about the unknown. Now, it's common for people to act out — becoming aggressive, using drugs or breaking the law — or act "in" with increased feelings of hopelessness. She expects rates of depression to increase over the next three to six months, and suicide rates and domestic violence to subsequently increase as well. By March 2021, we might see behavioral health impacts get back to normal, if the coronavirus cooperates, of course.

That makes behavioral health providers as important as ever. And while some moved to phone appointments only, that was never an option for Compassionate Addiction Treatment, a nonprofit in downtown Spokane.

"If we closed, our clients would not have access to us," says co-founder and recovery program manager Hallie Burchinal.

Much of their clientele are people who are homeless, she says, and other services for the homeless have shut down. Yet working every day around people has brought up feelings of anxiety that Burchinal says she hasn't experienced in years.

Co-founder Trudy Frantz says they have enough trouble finding time to treat all their clients, let alone think of their own mental health.

"We talk to each other," she says. "We might step outside and have a rough time."

Maintaining mental health for front-line workers isn't just important on an individual level, says Keri Waterland, division director of behavioral health and recovery for the Washington Health Care Authority. It's also important to ensure medical and behavioral health systems respond properly to the coronavirus crisis overall. And there's a simple reason for that, she says.

"Folks who are not able to feel supported are not going to be able to do a great job of supporting another individual," Waterland says.

Mauseth says things like reasonable work shifts, adequate rest and access to mental health providers can all help front line workers. But what may help the most as they battle this virus might be accurate information. That means knowing what to expect, knowing what's happening with personal protective equipment and having the proper training.

"It helps with providing a sense of power and empowerment when you know what you should be doing and what you need to be doing," Mauseth says.

After that day on March 14, when everything hit her at once, it took Lee a few weeks to feel better. The first time she fell into depression years ago she tried to deny it and hide it from others. This time, she says, she did the opposite.

"What helped me so fast this time was admitting it, acknowledging it, and being able to talk to people I trusted about it," Lee says. ♦