How to drink beer in a nice restaurant

The rest of the table has ordered wine

and then the server turns to you. You hang your head and sheepishly ask for a beer.

Been there? Most beer drinkers have over the years, but the notion that beer is the "lesser" when it comes to ordering a drink with dinner has begun to fade away. Many fine-dining restaurants now keep a solid list of tap beers or specialty bottles to choose from.

It wasn't always this way. A decade and a half ago, a nice restaurant might have a few bottles of beer they'd reluctantly bring out to the folks who eschewed wine.

The tide is turning, though. Spokane's No-Li Brewhouse has seen its beer land in some of the state's finest restaurants. A couple of Seattle eateries will gladly serve you a 22-ounce bottle of No-Li, presented by a waiter just like a bottle of wine. Splitting one of these larger bottles could very well become commonplace, believes John Bryant the co-owner of No-Li.

"It's changed in the culture of food. It's totally acceptable in a white-linen restaurant to order a bottle of beer to share," says Bryant.

At No-Li's brewpub, the beer list suggests food pairings and the menu, in term, offers beers that would go well with the food. A fine-dining establishment may know how to match its menu with a beer, but don't sweat it, says Bryant.

"With beer, there's no wrong choice. You could have a stout with fish or a golden with fish. Are there profiles that match better? Sure." says Bryant. "You should drink what you like."

While wine will probably always have a place above beer on the ladder of fanciness, many in the brewing industry, Bryant included, argue that beer is actually the more complex beverage.

"Hops are always evolving. If you think about grapes, they're mostly sustainable, but they're making hop hybrids now in a lab," says Bryant.

This, among other reasons, means that broadly speaking, the range of flavors in beer exceeds that of wine, making for more options for food pairings. As more people realize this, Bryant thinks you'll see more big bottles of beer arriving tableside wrapped in a white cloth.

"I don't think anyone turns their nose down at beer anymore," he says.♦

How to Eat Locally Sourced Food 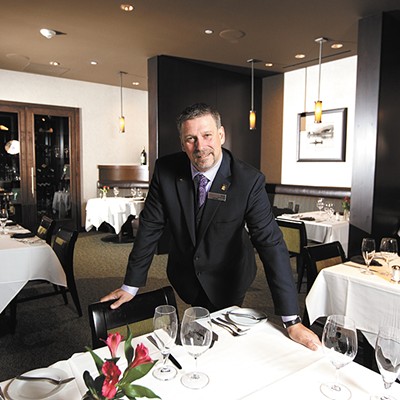 How to eat like a king in North Idaho

How to eat with a big group

How to Eat Sushi and not worry about it

How to tell people about what you ate

How to order a bottle of wine