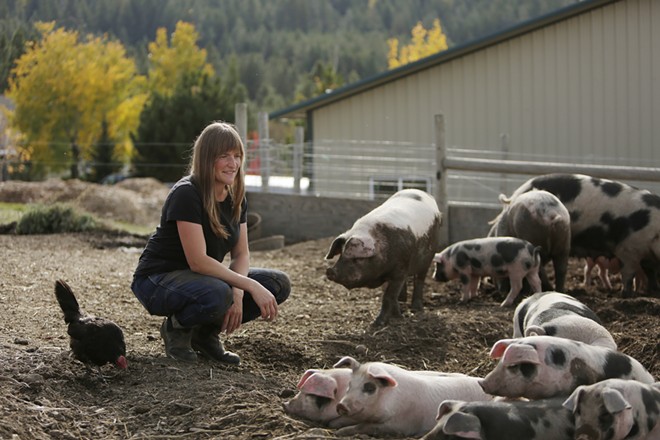 Farming is a full-time job, with a to-do list that bookends each year's harvest season, from late spring through mid-fall here in the Inland Northwest, depending on the crop.

Many farmers utilize Community Supported Agriculture (CSA) subscriptions to get a jump on the season. Also called a farmshare, a CSA is essentially an investment in the farm — a share — in exchange for what the farm produces, like meat or produce, and on a mutually agreed upon schedule, typically weekly throughout the harvest. CSAs can be pre-paid — sometimes months in advance of when crops are started or livestock is born — pay-as-you-go or some other model.

CSAs are only one source of regular revenue, however. Many farmers now employ multiple practices to stretch the definition of farming season, from selling additional items they derive from the farm to extending the CSA timeframe. Such practices promote more and different income streams, a larger or diversified customer base, and the kind of vertical integration that helps other industries mitigate risk, especially in farming's climate-dependent business model.

There are as many ways to extend the season as there are types of farmers. Idaho-based Prairie Home Farm, for example, sells pies from their pumpkin patch, and Greentree Naturals sells seeds to a southern Idaho cooperative.

In the Spokane area, two first-generation farmers are also implementing ways to extend the season and sustain their own operations, while also planting the seed for future generations.

"Hares are fertile and clever, changing with the season, running a step ahead," says Jacques, who also likes the color, feeling and scent that "verdant" evokes.

Jacques worked on other organization's farms for nearly a decade before starting Verdant Hare, including Washington State University's organic farm and Catholic Charities' Food for All Farm, where she started the Volunteer Farmer Intern Program. She hoped to pay forward the assistance she received as a budding farmer, but when COVID hit, she had an epiphany: A hands-on intern program wasn't sustainable if people couldn't gather.

Moreover, she was ready to go all-in with a place befitting what she calls her "big energy."

"I'd been working for other people for a long time because it was super safe," says Jacques, who's held onto the dream of being a farmer since she was a little girl in Alaska.

Young Kwak photo
Jacques interacts with sheep at her farm.

In 2020, she started Verdant Hare on 20 acres of leased, historic farmland west of the Iller Creek Conservation area off the Palouse Highway.

Jacques' garden and livestock operations both offer opportunities to extend the traditional farming season. A weekly fruit and vegetable CSA from Verdant Hare runs July through September, a typical season. But from February through June, Jacques also works with Main Market Co-op to produce garden starts for their customers, and for Verdant Hare.

Also helping with post-harvest sales is the farm's livestock menagerie: 10 turkeys, a Jersey milk cow and calf, and 22 pigs Jacques will slaughter for meat in December. Verdant Hare sells eggs from 75 laying hens through its CSA, while an additional 100 birds are destined for the chopping block, and then on to customers' refrigerators and freezers. And during October, Jacques has been on sheep-breeding duty to prepare for lamb-a-palooza next spring.

Jacques' 23 Clun Forest, Finn and Romney sheep are vital to Verdant Hare. They provide both meat — harvesting is on November's to-do list — and milk. Two ewes, Hilda and Temple, also yield richly colored fleece, which Jacques gets spun into yarn and also sells as raw fleece to provide a modest but year-round source of income that's independent of weather.

In addition to all this, Jacques shares her time and expertise. For between $50 and $300, visitors can tour the farm and schedule a consultation with Jacques (by phone, in person or at their own farm) or take a class.

In Verdant Hare's Homesteading 101 class, for example, participants learn to raise and butcher chickens, milk a cow and cultivate a garden through planning, planting, harvesting and putting the garden to bed for winter.

"I really think it's important for people to have opportunities to learn hands-on," says Jacques, who also donates her time to a group of local third graders who visit the farm twice weekly to learn about farm life.

"I really hope there's a little 'Whitney' in there," she says of the kids.

Like Verdant Hare, founders at Courage to Grow Farms in the Greenacres area of Spokane Valley are first-generation farmers passionate about sustainable agriculture, but also about helping expand the farming community. The farm's name comes from an album by Rebelution, a reggae band its owners admire.

"We had no land, just an idea and sheer motivation," says Shaneese Dunigan, who started the farm with partner Phillip Moore in 2018. The couple was living in a duplex with their kids and growing microgreens to sell commercially when a chance Father's Day gift changed everything.

Moore received Curtis Stone's The Urban Farmer: Growing Food for Profit on Leased and Borrowed Land, and by February 2019 the couple had 10,000 plant starts in the living room. Their hunt for land netted several temporary parcels, totaling half an acre, including their backyard. They were in business.

In March of 2020, the couple purchased a bus to live and travel in, planning to share their newfound gardening knowledge. The statewide shutdown squelched that dream, so they parked the 40-foot bus — home, sweet home for a while longer — leasing what would be the first of a succession of plots.

"By May we had sold 40 CSA shares and were farming 100 freshly-created, 50-foot long beds," says Dunigan, adding that much of the farm's initial output was donated to Catholic Charities' Food for All program.

A tall hoop house protects gorgeous purple-black tomatoes, peppers and eggplant from both summer's intense heat and fall's advancing cold weather. Greens, squash and other produce still await harvest in early October, but some still won't be picked until winter. As extra protection from the cold, a low hoop of plastic can quickly be assembled over the carrots, for example. These orange beauties are destined for the farm's new RBG Regenerative Agriculture Season Extension Project, named after the late Supreme Court Justice Ruth Bader Ginsburg at the request of a donor who helped fund the project.

To start, Courage to Grow is collaborating with other local farms under the RBG Project umbrella to deliver produce year-round to area food banks and shelters. The goal is to give out 1,000 boxes by year's end, distributed via four batches of 250 boxes, from Sweet Mercy Farm, Mighty Microgreens, Montague Heritage Farms, Kobes Valley Farm, amd Dogwild Farm. Courage to Grow also includes veggie-forward recipes with each box.

A second part of the RBG Project is a work-in-progress, involving not the growth of a particular crop, but of other farms.

Plans for that include a variation on the Airbnb or residency model by leasing housing to interested participants who'd also learn about urban farming and take that knowledge back to wherever they're from, says Moore.

Those plans are still in flux, however. After this season, the four-acre parcel Courage to Grow is currently leasing will be unavailable; nearby a construction crew hustles to finish building a house in this growing part of Spokane Valley. Their hunt for new land to farm continues, but the couple is optimistic.

"It can't be hard anymore," says Dunigan, reflecting on the challenges they've faced and met. "We just have to be along in our journey." ♦