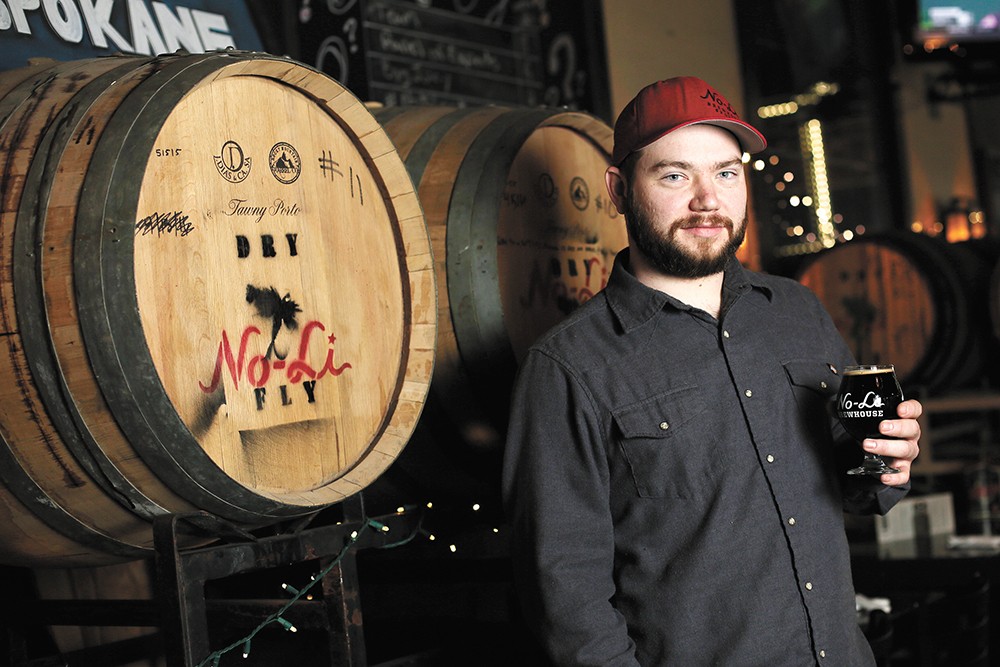 It's little surprise that barrel-aged beers have become such a commercial success.

An important job of craft brewers is to constantly look for new ways to take brewing to the next level. An oak barrel previously used to age liquor or wine can add a lot of complexity to beer in a relatively short amount of time.

Brewers take these barrels, fill them full of beer, and let them sit anywhere from a few months to several years. In the meantime, they'll frequently pull samples and note the changes in the beer. Since each barrel has its own characteristics, brewers test blends of different barrels to reach a final product — sometimes mixing in fresh beer to balance the hot alcoholic taste.

A number of Spokane-area brewers have experimented with barrels, but breweries like No-Li Brewhouse and Iron Goat Brewing are taking the extra step to help the growing trend become even more popular in the Inland Northwest.

"We've tried to differentiate ourselves from other breweries in the area," Brookhart explains. "One way we can do that is by barrel aging."

No-Li now has about 80 spirits barrels filled with various beers, and Brookhart says the program continues to grow.

"In the last year or so, it has ramped up quite a bit," he says. "Some of the barrels we have, we've had for four years."

In the first few months of 2018 alone, the brewery has already hit six aged bottle releases.

It kicked off January with the release of Rosy Cheeks, a 6 percent alcohol-by-volume (ABV) kettle sour (lactobacillus bacteria is pitched into a temperature-controlled kettle, making it a safer, less complex alternative to souring beer by aging it with a mixed culture) aged for three years in Dry Fly wheat whiskey barrels. Then, in February, the brewery released four bottles for its Barrel-Aged Winter Games series. The lineup included a winter ale, an imperial red ale and a barley wine aged in wheat whiskey barrels, as well as a bourbon barrel-aged imperial stout.

Last week, No-Li continued adding to its diverse selection of barrel-aged styles with the release of Born & Raised Again. The brewery took one of its most successful staple beers, Born and Raised IPA, and aged it for two years in wheat whiskey barrels. Hopped with Zeus, Cluster, Northern Brewer, Chinook and Cascade, it boasts the notes of a Northwest IPA paired with the caramel flavors of whiskey. Bottles are still available for $15 at the pub.

Brookhart says the barrel-aged Born & Raised is another example of the brewery's experimenting more with beers that aren't traditionally seen aged in a barrel.

"We put our Slacker (No-Li's ale brewed with orange peel and vanilla) into a wood barrel, we had some Unbreakable sour from this summer that we put into a gin barrel," he notes. "That's the kind of stuff that's really exciting to see come out now."

Every barrel-aged release from No-Li has been a one-off, and Brookhart says the brewery plans to continue that model for now. It wants to keep experimenting and blending different beers, and for him, it's about experiencing something new and not being stagnant.

For those who've yet to experience barrel-aged beer, Brookhart encourages them to do so.

"They're unique, they're special," he says. "In some cases, they can't be repeated."

Another brewery leading the way for barrel-aged beer in Spokane is downtown's Iron Goat Brewing. With around 140 barrels in its possession, head brewer and co-founder Greg Brandt says the practice is a passion of his.

While most of the brewery's previous releases have been dark beers and IPAs aged in Dry Fly barrels, Iron Goat's barrel-aging program is largely focused on something different.

Mixed culture fermentation is the use of common brewing yeast combined with wild yeast and lactic acid bacteria, creating a souring effect. Since the use of this bacteria and microbes requires more time for the beer to fully develop, it's a common step for brewers to throw a batch into a barrel to add another layer of depth.

Brandt says the process is interesting because it's unknown what's going to happen, or how the product is going to turn out in each barrel.

"It's more about the blending with those beers than the brewing," Brandt explains.

While blending is an important step, he says it can't solve every problem. Breweries can end up with anywhere from a 15 to 25 percent loss at times just because of the variables they have no control over.

"You don't try to blend a bad beer into a good beer," he explains. "You just blend good beers into one good beer."

Iron Goat is currently getting ready for its first bottled set of mixed culture sours: "Brett d'Or Do Claret" is a blend of beer aged up to four years in Barrister Winery merlot and cabernet franc barrels. Brandt says they're just waiting on the labels.

The brewery will also continue to develop other barrel-aged beers, like the upcoming Headbutt IPA aged in gin barrels with blood orange.♦

Waddell's Barrel-Aged Imperial Alligator: The latest release of this imperial oatmeal stout (10%) was aged in Dry Fly wheat whiskey and bourbon barrels; then it sat on cocoa nibs and French oak staves.

The original print version of this article was headlined "Second Life"