If you’re inside, wearing a mask and physical distancing are important. But so is proper air flow. 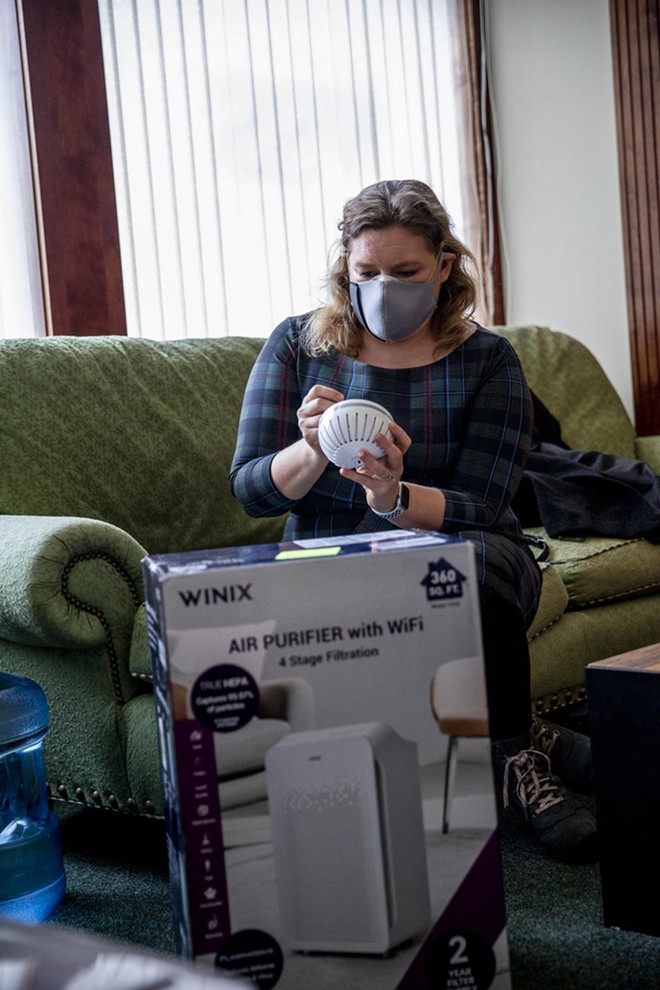 Dorothy Edwards/Crosscut
Sarah Schacht with some of the improvements — including an air purifier — that she has added to the commercial buildings she owns in Oak Harbor, Nov. 17, 2020.

When COVID-19 hit, Sarah Schacht wanted to do right by her tenants. As the owner of two small commercial buildings in Oak Harbor, she began researching what improvements she could make to help prevent the disease from spreading indoors.

Schacht could find plenty of information about handwashing, social distancing and disinfecting surfaces. Yet specifics on how to ventilate buildings to help prevent the coronavirus from lingering in indoor spaces? Those were harder to come by.

“HVAC companies are willing to sell you tons of stuff,” said Schacht, who said she had to do her own research to figure out which products recommended by manufacturers were effective. “But as a building owner or a business owner, you don’t have any idea what works.”

That was in June. Months later, the public health guidance has advanced somewhat, acknowledging that COVID-19 can spread not just through respiratory droplets emitted during close contact, but also through clouds of small, aerosol particles.

Many experts emphasize that, in addition to wearing masks and social distancing, improving indoor ventilation is crucial to helping reduce spread of the novel coronavirus.

According to the Centers for Disease Control and Prevention, aerosolized COVID-19 particles can remain suspended in the air for long periods of time, including after an infected person leaves a room, and can travel much farther than 6 feet.

That means if you are indoors, you can get infected with COVID-19 even if no one is nearby — especially if you remove your mask.

A few weeks ago, Washington state updated its guidance for how to ventilate enclosed spaces to help prevent airborne transmission of COVID-19. Among other things, the state’s guidelines recommend upgrading air filtration systems and increasing the flow of outdoor air into indoor spaces.

But Schacht and some experts think public health officials should have done more early on to address the danger of airborne COVID-19 transmission. And that, right now, officials should be working harder to educate the public about reducing those risks.

Shelly Miller, a professor of mechanical engineering at the University of Colorado Boulder, said that on top of wearing masks and social distancing, people at home can further reduce their risk by using portable air purifiers, opening windows and turning on exhaust fans.

Miller was the lead author of a paper examining a choir practice in Washington state that led to 53 confirmed or suspected COVID-19 infections and two deaths. That superspreader event has captured researchers’ attention because the choir members were careful to avoid close contact, as well as touching potentially infected surfaces — the key ways scientists initially thought the virus was most likely to spread.

“When we saw the Skagit Valley choral outbreak, it was like, ‘Oh my god, it has to be airborne,’ ” Miller said this week. She’s spent the past several months emphasizing the importance of improving air circulation indoors, but feels the message isn’t always getting through.

“I can’t tell you how heartbroken and frustrated I am that I have been saying the same thing over and over and over for nine months, and we have more infections than ever,” said Miller, an environmental engineer who researches urban air pollution.  “I think there is a vacuum of leadership on this issue.”

In some ways, officials in Washington state have been fairly attentive to the dangers of airborne spread of COVID-19. This month, Gov. Jay Inslee reinstituted a statewide ban on indoor dining and once again closed gyms and movie theaters. Inslee has also limited singing during religious worship, one of the things Miller and other researchers concluded was a big factor in the spread of COVID-19 at the Skagit choir practice.

When it comes to ventilation, “I think there has been improvement,” Inslee said last week, adding that he appreciates businesses that have used innovative approaches to try to make their indoor spaces safer.

But Washington state hasn’t mandated some of the things Miller and her colleagues recommended. Those include requiring better ventilation of spaces used for singing, as well as posting disclaimers on certain heating and cooling units, warning people to not shut them off because doing so would “shut down outdoor air supply, which can lead to the spread of airborne infections.”

Miller said she thinks states should mandate some of the ventilation improvements that Washington right now lists as optional recommendations.

If states gave businesses a binary choice — “would you like to invest $2,000 in air cleaners and filters and UV lights so you can stay open?” — Miller thinks most would opt to make the improvements.

“Some businesses also need financial support to help do that, but the retrofits that we are talking about in smaller spaces are not astronomically expensive,” Miller said. “It costs them so much more to have to close down.” She thinks prolonged closures of restaurants and schools could have been avoided, or at least shortened, with higher ventilation standards.

José Guillermo Cedeño Laurent, the associate director of the Healthy Buildings Program at Harvard University’s T.H. Chan School of Public Health, agreed that greater attention to ventilation improvements much earlier on could have helped change the course of the pandemic.

“We definitely know there could be ways of having buildings operating in a way that would prevent us from going into full shutdown,” said Cedeño Laurent, who was part of a team that put out recommendations in June for how to reopen schools more safely. Improving ventilation — such as by upgrading filters on mechanical ventilation systems, using portable air cleaners and increasing how often air changes over per hour — made up a large part of those recommendations.

Still, Cedeño Laurent said he’s not sure those ventilation best practices should be mandated, mainly for practical reasons. Because such air quality improvements aren’t part of the building code already, there generally wouldn’t be systems in place for inspecting and enforcing any new rules, he said.

Indeed, Inslee said last week that enforcement of new ventilation requirements during COVID-19 would be difficult.

“We have tried to give advice to businesses that improving ventilation, improving filtration, is clearly of benefit,” Inslee said. “But we simply do not have capacity to have state employees going to every restaurant and using a flow meter to adjust their ventilation.”

Given those limitations, Inslee said, “I believe we’ve done everything we can.”

Outside of new mandates, there are other ways some business owners and landlords think the state could help those working to make the air cleaner inside their buildings.

He would like to see health officials in Washington state recognize business owners who make those kinds of investments, perhaps by allowing them to reopen sooner if they can prove they have taken steps to improve air circulation.

As it stands now, the state’s recommendations on ventilation are “pretty good,” McHaney said — but many business owners don’t have an incentive to implement them when their business is going to stay closed regardless.

“It doesn’t say, ‘If you follow this guidance, you will have a pathway forward to open,’ ” McHaney said. “It’s just, ‘Here’s some guidance on this.’ ”

Rod Kauffman, the president of the Building Owners and Managers Association (BOMA) Seattle King County, said he, too, would like to see some sort of process to allow variances for buildings with advanced ventilation systems, but isn’t sure how that would work.

Granting exceptions to the governor’s closure order could be tricky, Kauffman said, in part because every space varies and has different ventilation needs, depending on what it’s used for.

He said owners of downtown office buildings took action in the spring to improve indoor ventilation, using guidance from both the state and industry groups.

“It would be wonderful if there were an appeals process ... I don’t know what would be the mechanism,” Kauffman said.

A new round of money Inslee announced Friday could help more business owners invest in ventilation upgrades. The latest round of $100 million in grants and loans from the federal Coronavirus Aid, Relief and Employment Security, or CARES, Act is flexible in how it can be spent, said Lisa Brown, the state’s director of commerce.

While earlier rounds of relief money also could be used to improve ventilation, businesses have had many other competing financial demands, including covering payroll, rent and mortgages.

Schacht, who owns the two commercial buildings in Oak Harbor, said the state needs to go beyond providing grants and loans, which she said will take too long to roll out at a time when more people are starting to congregate indoors, due to the holidays and colder weather.

Schacht thinks the state needs to purchase air purifiers and filters in bulk and set up a system for distributing them to small businesses and in low-income communities. The state could also offer tax credits for business owners who make upgrades themselves, she suggested.

“The Amazons of the world, the Whole Foods — they’ll be fine. They’ll get their own, if they haven’t already,” said Schacht, who estimates she spent about $7,000 to upgrade ventilation for her four tenant spaces. “But small business owners need these resources.”

Schacht has experience working on public health issues. For the past two years, she has worked as a consultant for the National Environmental Health Association on a project funded by the CDC. Before that, she pushed King County to adopt a new food-safety grading system for restaurants that was more accessible and visible to the public.

Public education is similarly important when it comes to COVID-19 ventilation protocols, Schacht said. Many people at home may be sitting on portable air purifiers they bought during this summer’s wildfires, she said, without being aware they can use those to significantly reduce the risk of COVID-19 aerosols spreading inside their home. Research also suggests that, in some spaces, using a portable CO2 monitor can help determine when it is necessary to let in more outdoor air.

As far as getting the message out to the public about the importance of ventilation? Posting a PDF on a rarely visited government website simply isn’t enough, said Sean Griffin, who previously advised the president of the United States and senior White House officials on disaster policy and responding to incidents like infectious diseases.

Griffin, a former director for incident management integration policy with the National Security Council, said public officials need to warn people about airborne transmission risks continually on social media. “As I’m scrolling through, it should be part of the doom scroll,” Griffin said.

Martin Cohen, a teaching professor in the University of Washington's department of environmental and occupational health sciences, said good ventilation is like one leg of a three-legged stool.

“If you have two legs, it will fall down.”