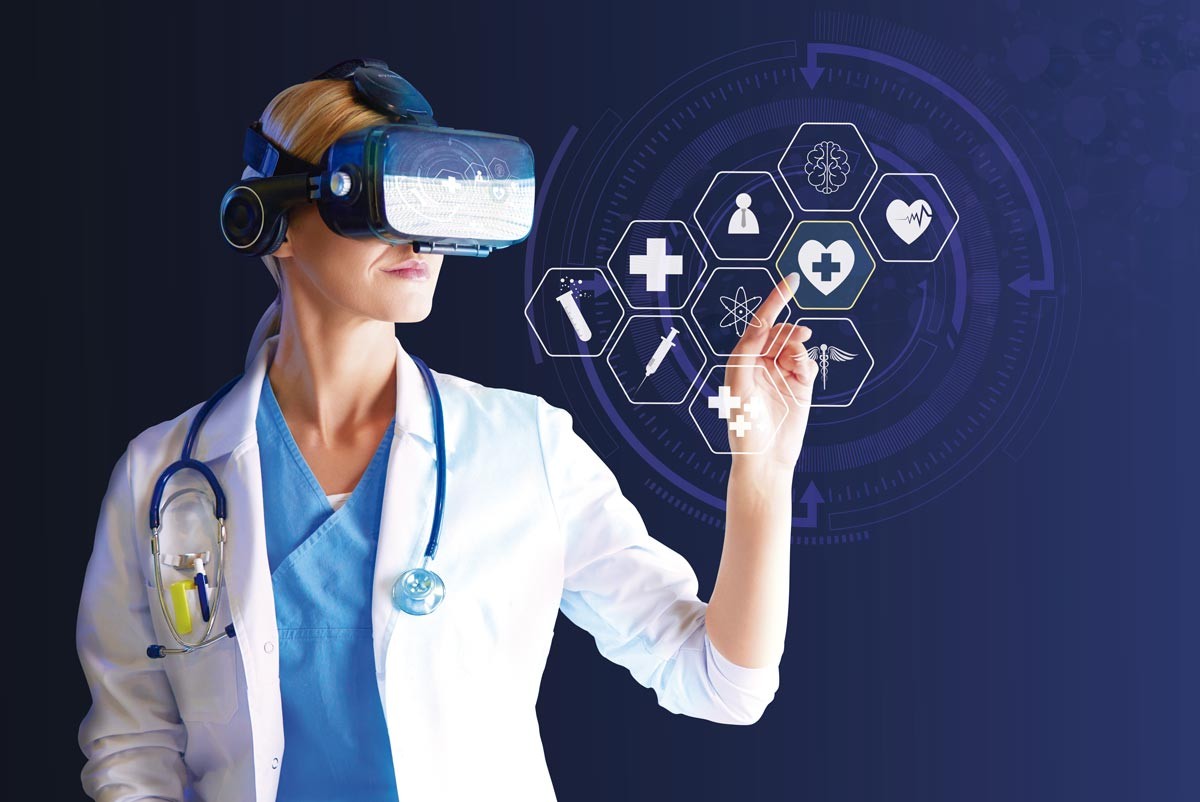 irtual reality has come a long way. Twenty years ago, the technology cost tens of thousands of dollars and weighed 50 to 100 pounds. Today, you can find lightweight models for less than $100. Strapping on the headset allows the user to immerse themselves in a 360-degree environment that feels almost real.

While much of the VR world is focused on entertainment and gaming, the technology is increasingly being applied to health care settings. In Spokane, the Northwest Counseling Center uses VR to help patients confront their phobias and practice mindfulness. Burn patients in hospitals across the country use a VR game set in a snowy paradise to help manage burn pain. And at Western State Hospital near Tacoma, new staff train with a VR module that puts them in the shoes of a patient and helps them understand what it's like to experience a mental health crisis. VR worlds aren't indistinguishable from reality, but they're getting close.

Courtesy of Tyler Hemstreet/Washington Department of Social and Health Services
Washington's Western State Hospital trains staff using a VR course that immerses them in the life experiences of Lena, a fictional woman with schizophrenia.

You're called to the front of a large, nondescript conference room to give some sort of speech. The subject isn't important; what matters is the audience. There are at least 50 of them — dressed in drab corporate attire and talking among themselves as you take the stage. You try to stammer out a few words, but they don't seem very interested in what you have to say. You feel yourself getting anxious. Their murmurs get louder, and with a twinge of horror you realize they're talking about you.

"I think it's their first time," whispers another.

Out of the corner of your eye, you see that people are starting to stand up and leave. Someone in the audience asks you a question but you're too distracted to even think straight. The speech is a complete disaster.

Thankfully, none of this is real.

When you take off the VR goggles, you're transported back to the office of Dr. Roger Yoder, founder of the Northwest Counseling Center in downtown Spokane. Yoder started incorporating VR into his practice shortly after opening in 2016. He now uses the technology to treat a variety of anxieties and phobias — including fear of public speaking.

By exposing patients to their phobias in a controlled, safe environment, Yoder is able to help them work to gradually regulate their response and get to a point where they can safely partake in the activity in real life.

The VR training doesn't normally start with the intensity of a speech in front of a hostile audience. Yoder will start patients on an easy simulation and then gradually work up the intensity while continuously monitoring their heart rate. The goal is to get to a point where they can confront the source of anxiety or trauma without triggering their flight or fight response.

"You can't just take a person with a fear of heights on the first day and throw them on top of the tallest building," Yoder says. "You're not helping them at all there. You have to work up to it."

For someone with a fear of flying, that might mean starting the session in a simulated living room watching a TV program about a deadly plane crash. Once the patient is able to comfortably sit through that without their heart rate spiking, Yoder moves them to the next stage: a simulated taxi ride to the gate and a walk through the terminal. After that, they'll board the plane and experience the flight itself, which is aided by a small motor in the patient's chair that vibrates to simulate turbulence.

On his computer, Yoder controls the experience in real time. He can turn up the turbulence of the flight, add thunder and lightning, or make the other passengers on the plane start panicking. He keeps an eye on the patient's heart rate throughout the session to make sure things aren't getting too intense.

"You can monitor the person to gauge where they're at so you don't ever get them to the peak of their fear," Yoder says.

Yoder says patients have seen tremendous success with the VR therapy model. Patients are sometimes able to overcome their phobia in as little as six to eight sessions.

The VR simulations are designed by a company called Psious based in Spain. They have dozens of simulations that help patients confront common fears like spiders, needles and elevators. If a patient has a more specific phobia — like walking across Spokane's Post Street Bridge — Yoder can use his 360-degree camera to create a module tailored to their individual needs. There are also VR modules designed to help patients with mindfulness and meditation.

Yoder said he's excited about the prospects of the technology. Most insurance companies, including state insurance, now cover VR therapy. You don't have to let your fear dominate your life, he says.

"There's help there; go get it," Yoder says.


Over the course of the two-week training, staff follows Lena as she deals with her symptoms while navigating the legal system and the long road to recovery. James Ortega, the instructional safety administrator at Western State Hospital, says the training elicits a powerful reaction among staff, sometimes even causing a few tears.

"It's changed some people's perspectives about what it's like to be a person who suffers from mental illness," Ortega says.

Building empathy for patients is a vital part of mental health care. Staff at psychiatric institutions like Western State Hospital are regularly placed in volatile situations where managing their own emotional reaction can be just as important as addressing the patient's.

"In crisis intervention and de-escalation, one of the things that we really want to practice is self-regulation," Ortega says. "We don't want to let our emotions get the best of us or let our adrenaline spike."

With that goal in mind, a team at the Department of Social Health Services set out to create training that would place staff in the patient's shoes and help them understand what it's like to be hospitalized with a condition like schizophrenia. Sara McCaslin, the creative director for the DSHS Office of Innovation, Strategy and Visual Communications, began working on the project in 2019 after discussions with state officials about how to improve safety at state mental hospitals.

McCaslin says the decision to use VR was guided by research. The immersive, 360-degree audio and video experience helps to submerge staff into an experience that's otherwise hard to describe. A 2018 study from Stanford found increased levels of empathy and information retention in people who use VR.

The project was guided by social workers, mental health technicians and nurses. The team also conducted in-depth interviews with real patients who shared their personal experiences, something McCaslin says was a key part of the process. With their help, the team at Western State Hospital was able to design the training so it was true to the patient's lived experience and not over-dramatized, she says.

The training follows a set script, but McCaslin says she is interested in exploring ways to make the training more interactive. In the future, staff could potentially be presented with different choices that would take the story in different directions, sort of like a choose-your-own-adventure novel.

McCaslin says her office has received calls from institutions in several other states who are interested in adopting the training. They are also looking to implement the training at Eastern State Hospital soon.

The VR training follows Lena throughout her entire recovery, including its conclusion when she leaves the institution and returns to her family. It's a part of the recovery process that staff don't usually get to see, and Ortega says it can be one of the most rewarding parts of the training.

"That's why most of us got into this job in the first place," Ortega says.

Recovering from a burn injury can be a long, painful process. Patients have to endure bandage changes, stretches and physical therapy, all of which bring back the pain from the initial burn. It's a uniquely painful process. Medicine helps, but there's a limit to how much you can give someone.


Thankfully, there's no limit to VR.

Todd Richards and Aric Bill | Used with permission from Hunter Hoffman, vrpain.com
Brain activity captured by functional MRI shows reduced activity in areas of the brain related to pain perception during the use of VR.

For the past two decades, Hunter Hoffman, a researcher with the University of Washington's Human Interface Technology Laboratory, has been studying how VR can be used as a tool to help burn patients manage the pain experienced during recovery. He started the research in 1996, when his colleague Dave Patterson, a clinical psychologist and pain expert at Harborview, told him about his own work using hypnosis as a tool to distract patients from burn pain at Harborview Medical Center. Hoffman was intrigued and began to wonder if the immersive power of VR could help take distraction to the next level.

"It's basically just a distraction on steroids," Hoffman says.

Hoffman and Patterson collaborated to create SnowWorld, a VR game that places the user in a calming snowscape with igloos, penguins, woolly mammoths and snowmen who throw snowballs at the player. Paul Simon's "Graceland" plays in the background as players throw snowballs back at the snowmen. Hoffman says he intentionally avoided incorporating the colors red and yellow so the player wouldn't be reminded of fire.

The game is simple, but it's been remarkably successful. Patterson and Hoffman have published multiple papers showing that patients who used SnowWorld during procedures experienced significantly lower pain levels. Physiological factors like fear, anticipation and anxiety play a large role in how people experience pain, but SnowWorld helps block out those negative feelings.

"The nice thing about VR is it kind of creates a white noise," Hoffman says. "It's like you're not really thinking about other things, you're not even really aware that your pain is reduced."

When Hoffman and Patterson first studied the applications of VR for pain reduction, they compared the pain experienced by patients who played Nintendo Mario Kart during procedures to patients who used SnowWorld. They found that the latter group experienced lower levels of pain, which Hoffman attributes to the visual immersion of VR; patients are much less likely to think about their wounds if they can't see them.

In the two decades since Hoffman and Patterson started their research, the cost and portability of VR have both improved dramatically. More than a dozen hospitals have used SnowWorld for pain prevention, and many more have adopted similar VR models. VR has been used to help distract patients during dental procedures, blood draws, childbirth pain and countless other health care situations, Hoffman says. VR has also been shown to be effective at preventing long-term chronic pain, although more research is needed.

Hoffman recently conducted research on the effects of SnowWorld at a burn unit in Texas that specializes in treating children from South America who have experienced severe burns. Hoffman remembers one young child talking in Spanish as he prepared to undergo physical therapy. Instead of complaining about the pain he was about to experience, the child had his mind on the game.

"Watch out, penguins," the child said as he entered the room and prepared to don the headset.

With an eye toward the future of medicine, WSU medical school students explore the world of VR

Nate Sanford is a staff writer for the Inlander covering a variety of news topics. He joined the paper in 2022 after graduating from Western Washington University. You can reach him at 509.325.0634 ext. 282 or nates@inlander.com