For the past year, Robin Andrews has been fighting to know what happened in her husband's final moments.


Craig Johnson was shot and killed by a Bonner County Sheriff's sergeant a year ago, in September 2017, but the Idaho State Police have refused to release its investigative records. 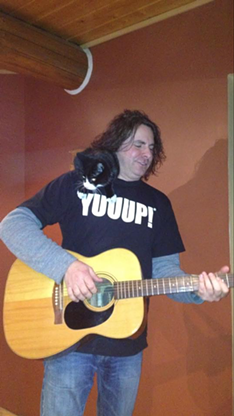 The autopsy report, which has been released to Johnson's family, shows that he was shot at least twice: once in the stomach and once in the back. But the report is unclear which bullet hit first, and for his wife, it only raises more questions.

"It's unclear to me which was first," says April Linscott, the Idaho-based attorney representing Andrews. "And if you're a wife reading that, you're like 'Did they shoot him in the back? What happened here?'"

Bonner County Coroner Robert Beers confirms that Johnson was shot "toward the back part of his shoulder, close to the armpit," but was unable to say which bullet hit first. The Spokane medical examiner performed the autopsy.

Preliminary information released by ISP last year indicates that Johnson was shot after he pointed a handgun at deputies, who were at his cabin near Priest Lake serving a warrant for his arrest. The arrest warrant stemmed from an encounter between Johnson and another Bonner County deputy, who was at the cabin a few days prior. Andrews had requested that police check on Johnson after he wouldn't answer her phone calls, ISP has said. Johnson allegedly pointed a gun at the deputy who was conducting the welfare check.

In June, Linscott, the attorney, filed a lawsuit asking a judge to force ISP to release its investigation, along with Johnson's property that police seized from the couple's cabin after he was killed. Linscott filed the lawsuit after ISP, citing an open investigation by the "Kootenai County Prosecutor's Office," denied her public records requests.

Now, the Idaho attorney general is asking a judge to toss out the lawsuit, arguing that Linscott's claims are inaccurate, according to court records.

In her response, Linscott calls that argument "nonsensical" and "absurd." How can Johnson's family be expected to give accurate information when the police will not release information to them? Linscott asks.
Specifically, the Idaho AG says Linscott's lawsuit is wrong in stating that ISP is investigating Johnson for assaulting a law enforcement officer. The AG corrects Linscott, saying ISP's investigation is into the fatal shooting, where Johnson is the victim. Scott Graf, a spokesman for the Idaho AG's office, declined to comment for this article due to the pending lawsuit.

However, the warrant that allowed ISP to take Johnson's belongings, including his driver's license, a laptop, cash and firearms, states that police are investigating two crimes: "assault on a certain law enforcement officer" and "murder."

In other words, in a single warrant police are saying Johnson is both a suspect and victim. And in its motion to have the lawsuit dismissed, the Idaho AG says Johnson is not being investigated as a suspect — you can't prosecute a dead man — but that his belongings were seized as part of an investigation where he is a victim.

"How is his laptop relevant? How is the cash relevant?" Linscott says. "There has to be some sort of probable cause to get those things. Even if they had probable cause to take it, what the heck? They're not prosecuting him for anything. They don't get to just keep people's stuff with no due process for a year."

In court documents, Linscott suggest that a judge should consider sanctions for the opposing lawyers under a court rule that requires attorneys to be reasonably truthful in statements they provide to the court.

After ISP denied Linscott's request for the investigative records, Kootenai County Prosecutor Barry McHugh has since reviewed the case and on Aug. 21 cleared Sgt. Deem of criminal charges. Deem was also cleared of internal policy violations and has been back on regular duty since last year, Bonner County Undersheriff Ror Lakewold says.

In a letter notifying Deem of his decision, which has not previously been made public, McHugh describes the altercation between Johnson and the police:

On the morning of Sept. 26, 2017, Deem and Bonner County Dep. Ted Swanstrom — both snipers on the Emergency Response Team — wait behind Johnson's cabin while more Bonner County law enforcement officers are stationed in the front. The officers in front attempt to contact Johnson through a PA system in an armored Bearcat vehicle.

After about 30 minutes, Johnson leaves through the back of the cabin where Deem and Swanstrom are waiting, McHugh writes based on ISP's investigation. No body camera or video footage exists of the altercation between Johnson and the officers, McHugh says.

Deem and Swanstrom briefly lose sight of Johnson after he leaves the cabin, McHugh writes.

Johnson then comes "out from behind the bushes and back into Swanstrom's view," looking toward the cabin. Swanstrom sees Johnson holding a pistol by the barrel and yells "gun," McHugh writes. Deem tells investigators that he hears Swanstrom tell Johnson twice to drop his gun.

At one point, Johnson grabs the gun with his right hand and points it at Swanstrom. Deem sees Johnson walking with his gun pointed at Swanstrom and Deem shoots Johnson twice, McHugh writes.

Linscott, who had not seen McHugh's letter until recently, still questions why the state will not release the investigation or Johnson's possessions.

"Barry McHugh is obviously a well respected professional," she says via email. "If he was the one doing the investigation, he certainly wasn't going to be influenced by the public release of [the] Idaho State Police report. So why not release it?

"Barry seems to agree with my position that the only relevant information is the 'information known to Sgt. Deem at the time of the confrontation at Mr. Johnson's residence.' So, what evidentiary value could the items seized after the fact in the house have? Why not release the property?"

The next hearing in the lawsuit is scheduled for October. Linscott says the judge could force the state to release its investigation and Johnson's property or ask for a more specific reason why they should be withheld.

A jury verdict in an Idaho hate crime case sends the wrong message, a victim says