In a year without shows, the Inland Northwest arts scene found wider access through virtual routes 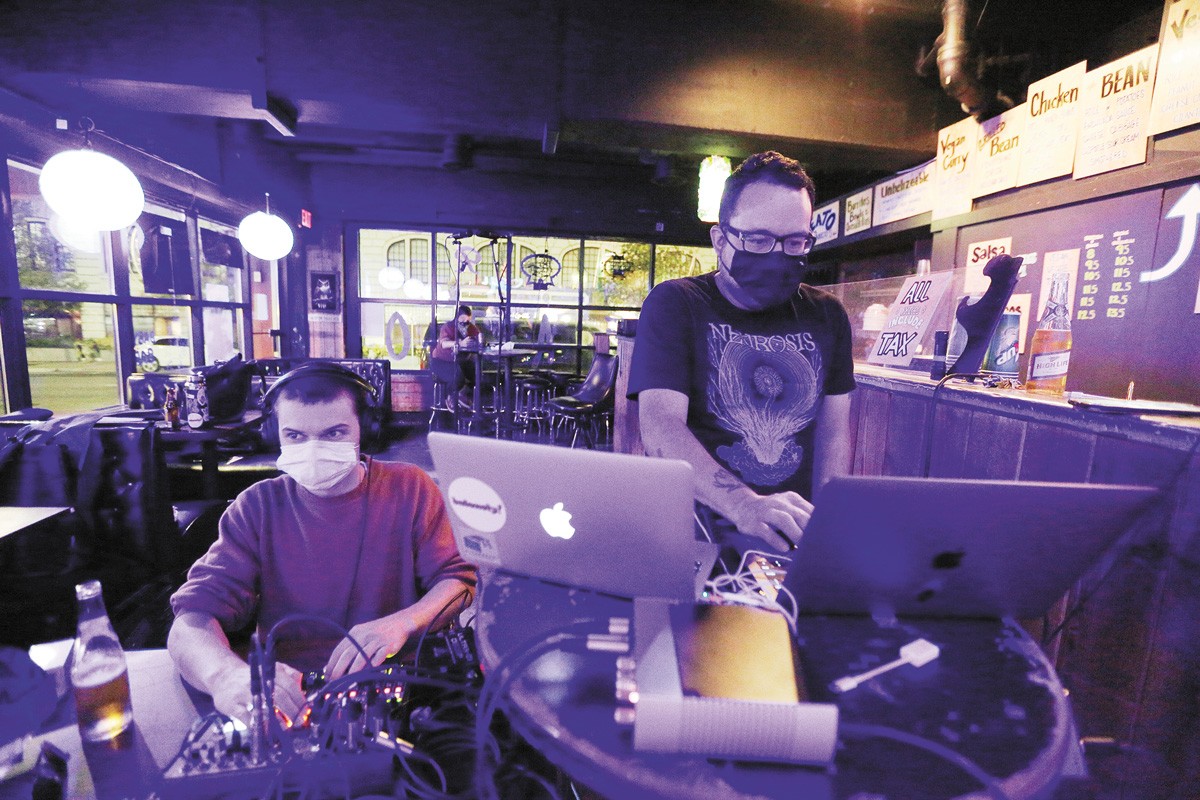 Young Kwak photo
Norman Robbins (left) and Luis Mota during one of the livestreamed shows at Neato Burrito.

It's difficult to imagine there being any kind of silver lining to COVID-19 shutdowns, which (among so many other things) robbed us of in-person theater and music and comedy for a full year. As venues all over the Inland Northwest swept away tumbleweeds, a dark realization reverberated through the arts communities: Arts venues were among the first businesses to close their doors, and they will likely be among the last to reopen at full capacity.

Still, many arts organizations and individual artists have exhibited real resiliency in response to the pandemic, pivoting into online arenas and virtual spaces to reach audiences both new and old. It turns out there is something of a benefit to streaming, which creates an accessibility that hadn't previously existed.

Just look at the 2021 Sundance Film Festival, the first major movie event of the year to go fully virtual. The Utah-based indie festival reported half a million views of its features and shorts programs, estimating that its virtual audience was "2.7 times larger" than a standard Sundance turnout.

Other festivals have followed suit, with both South by Southwest and the Seattle International Film Festival going virtual this year. Right here in Spokane, the Jewish Cultural Film Festival changed up its model, offering a variety of events and screenings through a digital platform.

Neal Schindler, the festival's director, says that all kinds of factors could keep audiences away from his event in a normal year — mobility issues, scheduling conflicts, bitter winter weather. But this year's virtual attendance was actually higher than in-person attendance at last year's event, and because virtual screening rights are slightly less expensive than in-person ones, the selection of films (seven features and two shorts) was wider than ever.

"We did send out a post-festival survey electronically, and a third of the people who responded said they've never been to the festival before," Schindler says. "When I think about who came through the proverbial gates, there were a lot of folks I didn't remember from previous festivals."

Schindler points to other comments in that survey, from festivalgoers who were stuck at home and therefore watched more movies than they might normally. This virtual model will likely continue in the future, too: Schindler says the festival received a grant that will go toward hosting a hybrid event next year that combines in-person screenings and online-only events.

"There are plenty of people who will be delighted when we're back in person," Schindler says. "Our happy medium is that we're hoping to do in-person screenings as well as some virtual components."

Terrain, the local arts nonprofit, has also seen some benefits to hosting events in a virtual space. Co-founder Ginger Ewing says that, among the online-only events that Terrain threw in the past year, the biggest success was last fall's virtual art auction and fundraiser. Not only did the event raise enough money to cover Terrain's operational costs for a full year, but collectors from all over the country tuned in to bid on Spokane art.

"We were actually quite surprised by the people who were buying artwork from Seattle, or from the East Coast, or from California," Ewing says. "Those people wouldn't have been able to participate if it was solely an in-person auction. It expanded Terrain's audience, but also [gave] exposure to the artists that we're highlighting to a much broader audience."

There are certain drawbacks to virtual-only events, of course: Setting up that online platform is a full-time job unto itself, and events like Terrain's flagship arts showcase, which reliably draws thousands of people every October, probably wouldn't work in an online format. But Ewing says Terrain is still open to hybrid, multiplatform events in the future — if it's feasible.

"Will organizations have the capacity to do both?" Ewing says. "If we can, then that is certainly what we want to do, again, because it just opens and expands the audience. ... To be quite honest, I'm a little ashamed that I didn't think about it until I was forced to."

Local musicians have also leaned into the accessibility of virtual venues. The downtown staple Neato Burrito has been closed to customers for a year now, but it has been serving as a makeshift TV studio manned by musicians Norman Robbins and Luis Mota. Since the fall, the duo has brought in an array of Spokane artists to perform for ticketed livestream events broadcast from Neato, and although the learning curve was steep, Robbins says they've now got it down to a fine science.

"It's a very efficient setup now, compared to where we were when we first started. I'm hauling around so much less equipment, but I'm able to do so much more," he says. "It's basically like having a portable television broadcasting facility."

The most popular events in the ongoing livestream series have been variety shows that feature a mix of live music, poetry, comedy and prerecorded sketches, a grab-bag format that Robbins admits he never would have considered had it not been for those online-only parameters. He and Mota are already talking with Neato owners Tim Lannigan and Patty Tully about continuing the digital series even after in-person audiences can return, a rare positive vestige of this hectic year of forced adaptation.

"We took advantage of every possible thing we could virtually. It's just what we had to do to survive, and to keep people inspired," Robbins says. "Through those challenges, we've discovered all these benefits to spreading art." ♦

The original print version of this article was headlined "Artistic Connection"