The unimaginable took place at Freeman High School, and a community is left reeling with grief and questions 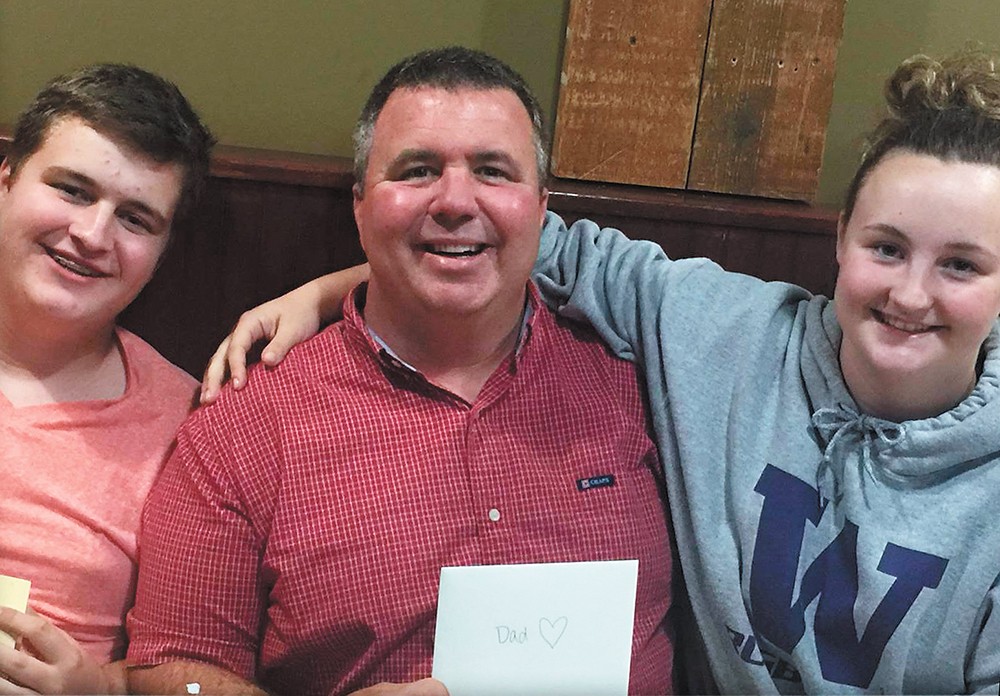 Sam Strahan (left) was killed after he confronted a classmate who brought guns to school. Sam's father, Scott (center), died just 12 weeks before.

It all happened so quickly.

A Freeman High School sophomore — who had been suspended after giving threatening notes to classmates — returned to school last Wednesday morning with two guns and opened fire, killing one Freeman student and wounding three others, authorities say.

The 15-year-old suspect was confronted by a custodian, who held the teen until law enforcement arrived. Parents rushed to the school to retrieve terrified children. Then came the national news media. And then the question: How could this happen here?

Students returned to school on Monday as investigators continue to sort it all out. The accused shooter, Caleb Sharpe, sits in juvenile detention, charged with murder and attempted murder, and could be tried as an adult.

Meanwhile, the family of Sam Strahan, killed in the hallways of Freeman High, grieves.

"The reality is that kids being bullied have access to unsecured firearms and in return are committing devastating acts due to their untreated mental health issues," Sam's cousin, Anna, says in a statement on behalf of the family. "This incident was preventable. Sam is gone because another teen with mental health issues had the tools to carry out this horrific event."

A Freeman High School student fled to the nearby elementary school and tweeted this photo.

Sam Strahan sat down at school last year to eat his lunch of tomato soup. But he'd grabbed a fork by mistake, according to a classmate, who recently posted her favorite memory of Sam on social media.

Sam declined offers from friends to get him a spoon. "I can make this work," he said.

"Sam ate that entire bowl of soup with a fork," the girl wrote. "I remember a week later finding a quote on here saying 'Life is soup, and I'm a fork,' so I naturally sent it to him and shared a laugh at the memory. This quote speaks to me on an entirely different level now. As stupid as it sounds we are all forks in this soup life and no matter how hard it is, we've just gotta make it work."

The stories about Sam continue to pour out. Classmates remember a kindhearted boy, who was always "cracking jokes."

"I remember he was one of the first people who said 'Hi' to me," says Kassidy Reilly, who transferred to Freeman High last year. "I didn't know a lot of people, but right when I met him, he told me a joke. He was really outgoing. That's what I remember most."

"I always knew you were going to shoot up the school," Sam reportedly told the gunman. "You know that this is going to get you in trouble."

The shooter then fired a pistol twice, killing Sam, whose own father, Scott Strahan, had died just 12 weeks earlier in an accident on Father's Day, according to an obituary.

"Sam had a great sense of humor, loved his cat Bella dearly and enjoyed playing video games," Sam's cousin, Anna, says in a public statement for the family.

"He was an active member of the community," she continues, "volunteering at Generation Alive and serving as a member of the Boy Scouts of America where his father was the troop leader."

WHO IS THE SHOOTER?

For some Freeman High School students, no explanation could help reconcile the deadly shooting in their hallway with the "nice, nerdy kid" they knew.

"Can I just say something?" Stuart says after a candlelight vigil after the shooting. "Online, I've been seeing everyone saying really awful things about him. I don't really think he was that bad of a person. He was just going through a lot of stuff, and he took his anger out on the wrong people. He gave out notes to people to try and let them know, and no one did anything. It wasn't a case of bullying or anything. His best friend moved away about a year before, and he just went downhill."

In the week since the deadly incident, more details about Sharpe's actions have trickled out. The sophomore told detectives that he'd been seeing a school counselor for "suicidal ideations," according to court documents. His parents confirmed to police that he'd written a suicide note more than a week before the shooting.

Sharpe had recently been suspended after the school became aware of notes he'd handed to friends saying he was going to do "something stupid," authorities say. Sharpe allegedly brought the guns to school on his first day back.

A friend of Sharpe's told police that the teen bragged about "owning multiple guns" and has made explosive devices out of chemicals and gas. When investigators searched Sharpe's room, they found a Freeman yearbook with faces of classmates marked with an "X," records indicate.

From the Sharpe family home, detectives also collected a PlayStation 4, a computer, a "notebook manifesto list of dads ammo," a "revolver w/ 5 bullets," and a "practice molotov cocktail" under some clothes near Sharpe's closet, records show.

After his arrest, Sharpe told detectives that he didn't come to school that day to specifically target anyone, but "to teach everyone a lesson about what happens when you bully others."

A JUVENILE OR AN ADULT?

Spokane County Sheriff Ozzie Knezovich has already stated that his office will push to "try [the shooter] as an adult for pre-meditated murder."

Ultimately, it's up to a judge.

If Caleb Sharpe is found guilty in juvenile court, the most time he could spend behind bars is about six years — or until he turns 21. As an adult, he would face at least 20 years, and at most 26 years, in prison, though a judge can lessen the sentence, says Megan Manlove, a Spokane County public defender who works in juvenile court, but is not involved in Sharpe's case.

Finally, Manlove points out that the goals of the juvenile system are different.

Regardless of where the case ends up, if convicted, Sharpe would be held in juvenile detention until he's 18, rather than an adult prison.

"He's going to get out eventually," Manlove adds. "I don't know what good it's going to do to send him to adult court. The research is pretty clear; adult court does not lead to better community safety. Those kids actually have a very high recidivism rate. The community could actually benefit more if the case stays in juvenile court."

It's not easy to spot someone who will turn violent, says Washington State University psychology professor Chris Barry, who specializes in studying behavioral disorders of children and adolescents.

School shooters typically feel isolated, disconnected from their peers, Barry says. And they can get frustrated easily. Generally, kids who commit violent acts are less remorseful.

But just because a student has those characteristics doesn't mean they're going to act on them, he adds. Barry says there are some steps that schools can take to prevent kids from acting on violent threats.

If students are threatening to harm themselves, the school should address it immediately, including counseling. If there are threats against other students, the school is obligated to report the threat to law enforcement, Barry says.

"What we find in some of these school shooting cases is a lot of times there was an elaborate plan in terms of date, time and potential targets," Barry says.

Regardless of the warning signs, Barry says, students need support, not punishment.

"If they express anger and frustration and threaten to harm themselves or others, it's not a punitive thing," he says. "It's 'Let's find out what's going on here.'"

It's difficult to know which gun control regulations, if any, could have prevented the Freeman High School shooting.

For state Rep. Laurie Jinkins, a public health official from Tacoma who has focused on reducing gun violence, there isn't a "single magical solution."

Washington state has been among the leaders in gun control in the United States. In 2014, voters passed a ballot initiative that expanded firearm background checks after similar efforts failed in the legislature.

Two more gun control laws were enacted over the past year. A bill passed by state lawmakers requires gun dealers to notify the Washington Association of Sheriffs and Police Chiefs when anyone tries to buy a gun and fails a background check. That information is kept in a database.

And voters passed a ballot initiative last November that empowers police, family members and others to ask a judge to remove guns from people who are in danger of hurting themselves or others.

Other gun regulations have failed, such as the "Safe Storage" bill that would have required a gun to be locked in a gun safe if a minor is at home. Efforts to intensify background checks for people looking to buy military-style semiautomatic weapons and weapons with high-capacity magazines stalled in committee. And a bill pushed by Washington Attorney General Bob Ferguson, which would have banned all semiautomatic rifles with detachable magazines and a pistol grip, went nowhere.

Still, it's possible that those protections wouldn't have mattered in this case. Caleb Sharpe, the sophomore accused of killing one classmate and injuring three others, knew the combination to the gun safe in his family's home, both Sharpe and his father told police. And the semiautomatic AR-15 rifle Sharpe brought to school jammed before he could fire any rounds. The 15-year-old allegedly brought a pistol as a backup.

WHO STOLE THE PURSE?

Parents of Freeman students descended on the school as word of the deadly shooting spread. Traffic jammed on nearby Highway 27, and many parents abandoned their vehicles and ran to the school — some unsure whether their children were alive or dead.

One mother returned to her vehicle to find her purse missing, and by Friday afternoon the crooks had racked up more than $36,000 in fraudulently cashed checks and credit card charges, according to the Spokane County Sheriff's Office.

Tips came pouring in, and by Monday detectives had arrested one woman — Nicole D. Jensen, 33, of Spokane — and have identified a second suspect, who is not in custody.

No one sat in Sam Strahan's usual seat in first-period biology.

The first day back after the shooting was hard, especially walking through the hallway where it all unfolded, says Kassidy Reilly, a sophomore and Sam's biology classmate.

"Like a gazillion" counselors were at the school in case students wanted to talk, Reilly says. "Most people seemed OK. It still sucks, but everyone is recovering slowly together."

And with that recovery, the already tight-knit Freeman High School community has grown tighter.

"These kids have been going to school together all their lives," says Reilly, who transferred to Freeman last year. "Since the shooting, it's insane how much closer I've gotten. Freeman feels like a family." ♦