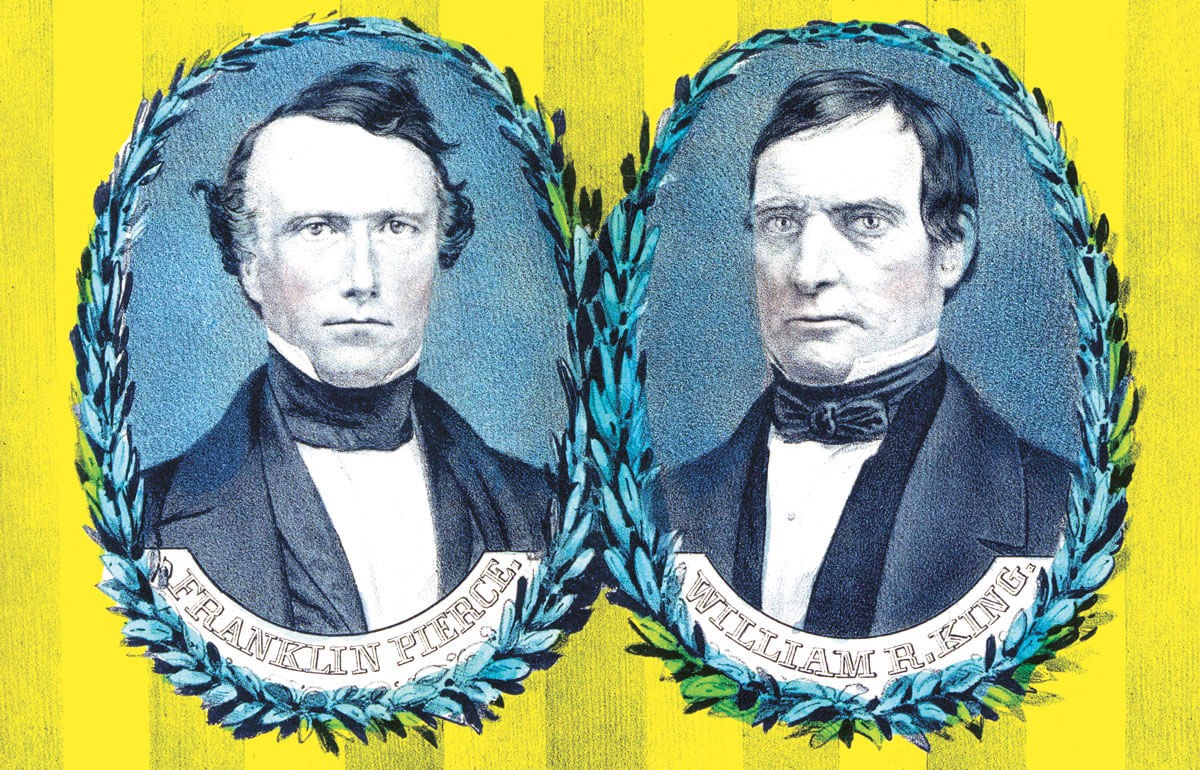 Confederate statues are being pulled down, one after another, spurred by Black Lives Matter protests across the country. The likenesses of other historic figures with problematic histories have been toppled, vandalized or removed, too, including those of the conquistador Juan de Onate in New Mexico, Francis Scott Key in San Francisco, George Washington in Portland, and Theodore Roosevelt, flanked by figures of subjected peoples in New York. In Seattle, a Confederate memorial in a historic cemetery on Capitol Hill has been vandalized.

There are other tributes closer to home that might be worth reconsidering, if not toppling. Few think about the men behind the names of some of Washington's 39 counties. When you do, a disturbing pattern emerges. At least eight are named for slave owners, White supremacists, people who sought to extend slavery in the United States or who tried to ban Black people from the Pacific Northwest altogether.

Until 2005, that list was one name longer. King County was originally named for an Alabama slave owner, William Rufus De Vane King, who happened to be Franklin Pierce's Democratic running mate in their victory in 1852. Pierce County was named after the president and neighboring King County was given his vice president's moniker. Fortunately, a bipartisan effort to change the designation of King County to honor Martin Luther King was made, though not without a struggle. It took nearly two decades to make the change official after it was adopted.

King County no longer honors a virtually unknown slave plantation owner but rather a Black icon of civil rights. Even so, the name change was uncomplicated by the fact that the name of the county didn't have to change, only who it was honoring.

There probably is no such fix for Pierce County. Its namesake president, Franklin Pierce, was called a "doughface," a term used in the 1850s and '60s for Northern Democrats who were Southern sympathizers. Though he was from New Hampshire and was not a slave owner, or even in favor of slavery, he did oppose abolition because he believed it was the wrong way to end the institution and would violate the constitutional rights of Southern states, a fairly mainstream view in his era.

Pierce also acted in ways that advanced the slave owners' cause. He signed the Kansas-Nebraska Act, which opened the possibility of slavery's expansion into the Western territories. Pierce promoted U.S. expansion abroad, too, including the annexation of Cuba. Opponents of slavery saw this as an attempt to acquire new slave territories for Southern interests.

The major proponent of the Kansas-Nebraska Act was Sen. Stephen A. Douglas, for whom Douglas County in Eastern Washington is named. He was loyal to the Union, but also opposed abolition and wanted to allow states and territories to decide on slavery on their own. The Democratic Party split into factions in 1860, with Douglas running for president against Republican Abraham Lincoln. The Southern branch of the party backed John C. Breckinridge of Kentucky whose running mate, Joseph Lane, was a senator from Oregon. A county in Oregon is named for Southern sympathizer Lane. Breckinridge became a Confederate general.

The Douglas, Lincoln and Breckinridge tickets supported the existence of slavery. And Douglas, though he denied it, was a slave master through his wife. She inherited a family plantation with 100 slaves in Mississippi. Douglas denied "owning" slaves, though he managed the plantation personally from a distance, and took from it profits that boosted his political ambitions. Douglas died shortly after the 1860 election, but he represented a large slice of the Democratic Party that was pro-Union at any cost, including tolerating slavery. When it came time to name the Washington Territory in the 1850s, Douglas proposed an amendment that would have named it "Washingtonia." The two vowels were rejected by Congress in favor of the less euphonious name we have.

Isaac Stevens, namesake of Stevens County in northeastern Washington, was the first territorial governor of Washington, appointed by Pierce. He also was elected to represent Washington in Congress. He is known for "negotiating," often through violence and threat, tribal treaties throughout the Washington Territory. Brutal treatment of the Indians led to conflicts in the mid-1850s in the Northwest, which led to terrible retaliations. He often criticized the U.S. Army for not cracking down on Native peoples hard enough. Stevens also declared martial law, illegally, to harass settlers who were too friendly with Native peoples.

Stevens managed the pro-Southern, pro-slavery presidential campaign of Breckinridge and Lane, a ticket that believed slavery was a constitutional right and threatened secession if it was tampered with. One of Stevens' helpers in that campaign? Jefferson Davis. Some Republicans in Washington Territory worried that if that ticket won, it would open up the possibility of slavery here. Stevens, however, remained loyal to the Union after secession, served as a Union general and died leading his troops at the Battle of Chantilly in 1862. Probably more than any other man of his era, Stevens shaped the foundations of what is now Washington State.

Another Civil War Union general is acknowledged in Grant County. Ulysses S. Grant was in Washington early in his career, stationed for a time at Fort Vancouver on the Columbia River. While Grant is known for his wartime service in defeating the Confederacy, and for his presidency during Reconstruction, in which he fiercely put down the Ku Klux Klan with force, it is little known that he owned a slave and oversaw many more. He married Julia Dent, whose family owned a Missouri slave plantation called "White Haven." Grant himself lived on the plantation for some years, supervising slave labor. He also owned a slave named William Jones, purchased from his father-in-law. He later freed the man. Grant had grown up in an anti-slavery household. His wife continued to have slaves throughout the war until 1865, well after the Emancipation Proclamation.

Thurston County at the southern end of Puget Sound is named for the Oregon Territory's first delegate to Congress, Samuel Thurston, who played a key role in the shaping of Washington and Oregon in the early years. He argued in Congress on behalf of Oregon settlers who did not want slavery there, but also opposed having any Black settlers, saying that if they came, they would intermarry with Indigenous peoples and create trouble. "The object is to keep clear of this most troublesome class of population," he argued. Oregonians voted to exclude Black people, and a provision to that end entered the state's constitution when Oregon was admitted to the Union.

Thurston was also key in passing the federal Donation Land Act, which allowed White settlers — and Whites only — to homestead in the Oregon Country, which then included what is now Washington, Idaho and parts of Montana and Wyoming. Some have argued that it was more effective than other legal Oregon exclusions in creating a "White" Northwest. Only 30 African Americans lived in the vast Washington Territory by 1860. As one author has put it, "The Donation Land Act was an emphatic endorsement of the color line in Oregon, and the law essentially functioned as an affirmative action program for Anglo-American settlers."

Jefferson County on the Olympic Peninsula is named for Thomas Jefferson who was a slave owner, author of the Declaration of Independence and the third president of the United States. He believed in westward expansion and was sponsor of the Lewis & Clark expedition of 1804-06, which sought to help extend and establish American claims in the West through exploration. Jefferson is said to have fathered up to six children with one of his slaves, Sally Hemings. Historians are still grappling with the fact that in modern terms, Jefferson was a rapist.

Connected to Jefferson was William Clark of Lewis & Clark fame. Clark himself was a slave owner — he owned at least 18 slaves — who brought a Black slave, York, on the land expedition to the Pacific Coast. York was Clark's "manservant" but was an invaluable member of the so-called "Corps of Discovery," among other things smoothing the way with Indigenous peoples they met along the way. Despite York's heroic contributions, Clark did not free him upon their return, which York asked as a reward for his services. He also did not allow York to go to Louisville to live with his wife. 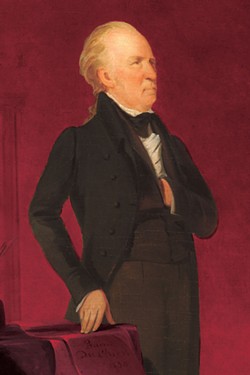 Clark wrote of York's efforts to be free: "If any attempt is made by York to run off, or refuse to proform [sic] his duty as a Slave, I wish him Sent to New Orleands [sic] and sold, or hired out to Some Sevare [sic] Master until he thinks better of Such Conduct." Clark himself beat York for being "insolent and sulky" over his lot. Clark eventually freed York, but his mistreatment has been called "... one of the saddest of the biographies of expedition members. Like so many other African Americans throughout history, he was held back not for lack of talents or ability, but merely because of the color of his skin."

Clark's companion, Meriwether Lewis, lends his name to Lewis County, adjacent to Thurston. Lewis was also a slave owner. He inherited a large Virginia plantation as a boy and ran the place when he reached 18. He had 24 slaves. He left the plantation to join a militia, then the Army, and had no personal slaves, though he did agree to let Clark bring one on their journey. He did not like the plantation life and has been referred to as a "loner," though later he hired a free Black man to be his servant, though he did not always pay him.

Beyond the counties, there are some larger names to consider.

Washington state is named for a slave owner who is also known as the Father of Our Country, George Washington. An alternative name considered for the state was Columbia, controversial today as Christopher Columbus kicked off a brutal European exploitation in the Americas driven by greed and fueled by slavery. A Columbus statue was removed from Seattle's waterfront in 2012, and one was toppled recently in Minnesota and another beheaded in Boston. We also have a region-defining river of that name, and a diverse Seattle neighborhood, Columbia City, not to mention a county, Columbia, on the dry side of the state.

Names on geographic features can take a long time to change, but there are successful recent examples of renaming ones disparaging to Black and Indigenous people, such as the Jim Crow names in southwest Washington, or Squaw names that appear throughout the Northwest. The process can be long and complex, requiring local support, an argument for change, extensive research and approval at the state and national levels.

Changing county names is somewhat simpler: It requires only approval of the state Legislature if the county wants to make the change, though such a vote is bound to be politically controversial. It's up to the folks who live in and those who represent those counties to demand change, defend the status quo or ignore a problematic legacy that colors our state's map. ♦

Crosscut is a service of Cascade Public Media, a nonprofit, public media organization.