NEW YORK — Word first surfaced recently that a video recording made outside of Jeffery Epstein’s Manhattan jail cell when he first attempted — and failed — to kill himself last summer was missing, even possibly destroyed. 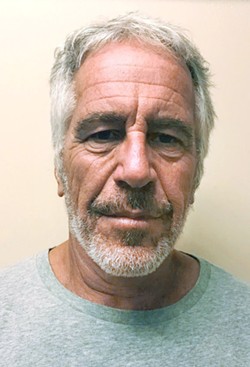 New York State Sex Offender Registry via The New York Times
A photo provided by the New York State Sex Offender Registry shows Jeffrey Epstein on March 28, 2017. Officials first believed that video from outside of Epstein’s cell during his suicide attempt in July had been recovered but now they say it no longer exists.
Within a day, though, the jailhouse video turned up, quieting conspiracy theories about Epstein’s death in a later suicide at the Metropolitan Correctional Center. Prosecutors said the jail’s staff had confirmed the video had been saved.

But Thursday, the saga of the missing-then-found video took yet another twist when prosecutors revealed that the recording was gone after all. The jail, it turned out, had preserved video from the wrong jail tier, and as a result, the government said, the footage from outside Epstein’s cell no longer existed.

The dispute over the missing footage arose in the case of another prisoner, Nicholas Tartaglione, a former suburban New York police officer facing homicide charges in federal court in White Plains, New York. (He has pleaded not guilty.)

For a time last summer, Epstein and Tartaglione shared a cell at the Metropolitan Correctional Center on 9 South, a special unit with strict security measures that is used to keep certain inmates separate from the general population.

After the attempted suicide and a period on 24-hour suicide watch, Epstein, 66, ended up back on 9 South alone in a cell. That is where he was found dead Aug. 10. New York City’s chief medical examiner determined that Epstein, a wealthy financier linked to many high-profile politicians and celebrities, had hanged himself.

Two guards who were on duty when Epstein killed himself have been charged with falsifying records and conspiracy. Prosecutors said they browsed the internet and napped instead of checking on him every half-hour as they were required to do. The guards, Michael Thomas and Tova Noel, have pleaded not guilty to the charges.