Jailed by a Computer Glitch 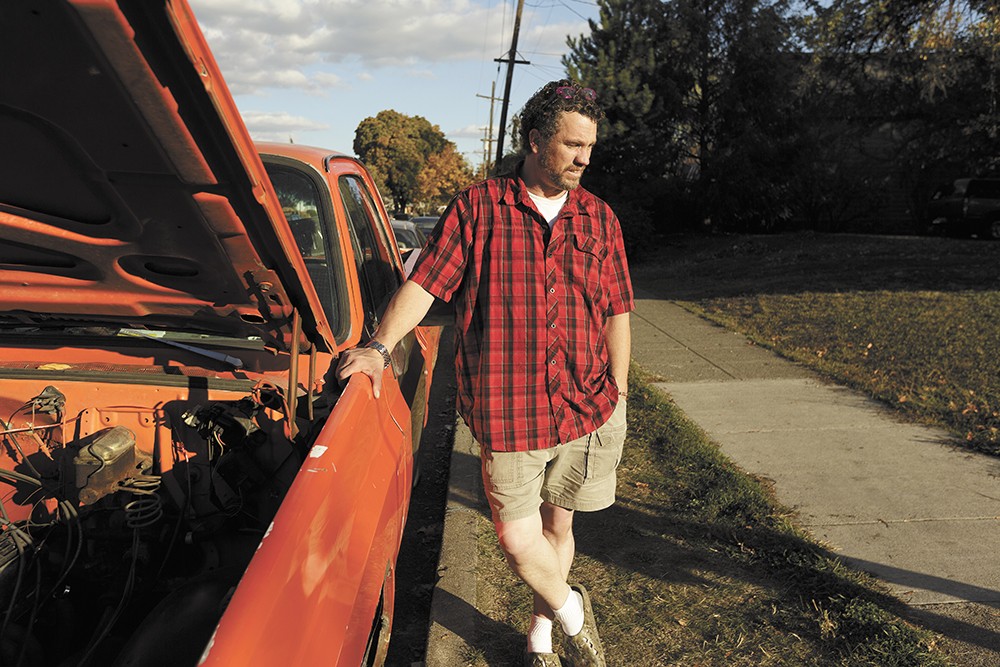 Young Kwak
Matt Gregory is one of an estimated 8,000 people whose driving offenses have been miscategorized, resulting in unnecessary jail time and fines.

CORRECTION: In May of 2009, the Washington State Department of Licensing updated the records of 8,000 people in an attempt to fix a computer glitch. The update corrected a previous error, but also misclassified some records, subsequently resulting in some drivers facing stiffer fines and penalties than the law warranted. The Department of Licensing caught the error in July 2015. This week, in an attempt to put a face on the issue, the Inlander profiled Matt Gregory, who, through his public defender, was identified as one of the people negatively impacted by the glitch. State officials now say Gregory’s record was not misclassified, as we reported. Our error was due in part to interpretation of an incorrect driving record sent to Gregory’s Spokane County public defender, confusing the status of his license.

When Matt Gregory was pulled over on his way home earlier this month for a busted headlight, he should have been issued two tickets — one for the headlight and one for driving on a suspended license in the third degree. He tried to tell the officer as much, but information on the officer's computer from the Department of Licensing told a different story.

So instead, Gregory was arrested for driving on a suspended license in the first degree, and his car was impounded. The difference is significant because a conviction in the first degree means mandatory jail time, whereas a third-degree conviction doesn't. It also means that Gregory will be arrested, booked and could spend the night in jail.

Thanks to an error in the Department of Licensing's computer system that went unnoticed for six years, Gregory has been classified as a first-degree offender, racking up 11 convictions since 2010. That means with good behavior, he spent a combined total of more than three years in jail because of a computer glitch.

Gregory is one of an estimated 8,000 people statewide whose license suspension was impacted by the Department of Licensing's system change in 2009, which automatically placed all habitual traffic offenders into first-degree status, whether they belonged there or not.

By continuing to drive with a suspended license, Gregory certainly has played a role in his legal troubles, but each time he's been charged, there was an opportunity for an attorney to catch the mistake. No one — not even the private attorneys he's hired — caught it until recently. On top of the jail time, he's paid tens of thousands of dollars in bail and attorneys' fees and lost cars to impound lots.

Gregory knows he isn't allowed to drive, yet he continues to do it, in part out of necessity — he has four school-age kids — and in part out of principle.

"I don't cause [bad] things in cars. I don't do malicious acts," he says. "I believe that people should be able to move about ... and [suspended license charges] are a way to generate revenue. Tell me, who's the victim on driving suspended?"

Christine Anthony, a spokeswoman for the Department of Licensing, says the error went unnoticed until July of this year. Employees are currently going through each of the 8,000 records to make sure the degree status of each is correct. They've gotten through 3,000 so far, Anthony says. However, not until September did the Department of Licensing notify judges and attorneys throughout the state via an email listserv. Even then, not all attorneys got the memo, and no law enforcement agencies were notified, Anthony says.

"It's not a law enforcement thing," she says. "It's really a courts and attorneys issue. It doesn't matter if you're in the first degree or third degree, law enforcement will still give you the ticket."

Chelsey Heindel, Gregory's public defender who caught the error, disagrees. If the Department of Licensing hadn't incorrectly classified Gregory in the first degree, she says, he might not have been arrested and could have avoided all that jail time — at least 1,147 days in all.

Heindel is representing Gregory on his two most recent driving charges. She says she first heard of the glitch through an email from a prosecutor in Cheney. In that email, the prosecutor writes that they've instructed officers to stop making arrests on first-degree suspended licenses. In Spokane, neither the Sheriff's Office nor the Spokane Police Department has been made aware of the error; both continue to make arrests for most first-degree suspended licenses, according to spokespeople for each agency.

Eventually, Heindel and the other Spokane County public defenders who handle misdemeanor cases received a copy of the memo sent by the Department of Licensing from the county prosecutor's office. In that email, Toni Hood, an administrative attorney for the Department of Licensing, advises all prosecutors to request certified driving records, which will show the correct suspension status.

If Gregory's case is any indication, prosecutors in Spokane County aren't heeding this advice. Heindel is representing Gregory on two charges of driving with a suspended license in the first degree — one from Aug. 31, the other from Oct. 7, stemming from the busted headlight. When the August case came across her desk, she requested Gregory's certified driving record from the Department of Licensing. A response on Oct. 1 showed he should have been charged in the third degree, yet he was still charged in the first degree on Oct. 7.

Several calls and emails to deputy prosecutors in the county were not returned.

In the Oct. 7 incident, Gregory was driving a little red Ford ZX2 that he'd bought for $1,000 when he got out of jail. He had just fixed it up and planned to sell it.

"That was the car that was going to restart me," he says. "But they impounded it before I could sell it."

Now, with the tow fee, impound fee and daily storage fees mounting, the $1,000 investment has turned into several thousand dollars in expenses.

It gets worse: For at least three driving charges in 2014, Gregory hired private attorneys, who he says he paid about $1,500 for each case. Each time he pleaded guilty because his attorney didn't catch the error.

"That could be a malpractice claim right there," says Justin Bingham, head of the city prosecutor's office.

The 46-year-old Gregory says he's never had a driver's license. At 14, he says he was held responsible for a car wreck while driving some friends home. Since then, he's racked up a history that includes 136 cases, most of them traffic offenses, including operating a vehicle without insurance, speeding eight miles per hour over the limit, failure to wear a seat belt, using a cell phone, failing to signal, driving too fast for conditions and driving the wrong way on a one-way street. He had one DUI conviction in 1999, but says he completed the court-ordered treatment. A long list, indeed, but not enough to be considered a habitual traffic offender and warrant jail time, Heindel says.

As he sits in a north Spokane house, hands folded in his lap and reading glasses resting on his curly hair, Gregory's eyes well with tears when he thinks about the time he's lost. Asked why he keeps driving if he knows what it will cost him, he looks to his 9-year-old daughter on the couch next to him. Gregory has seven kids; four are between the ages of 9 and 16.

Gregory continues to drive, even though he knows he's not allowed. Now that the issue is finally getting worked out, though, he says he's trying to get his license and is drumming up a little business fixing cars at his house. He's been a mechanic for 27 years, but says he's been unable to get a job at a shop recently: Most employers require a valid driver's license. ♦