To play Tosca, soprano Jill Gardner had to learn how to hate her husband 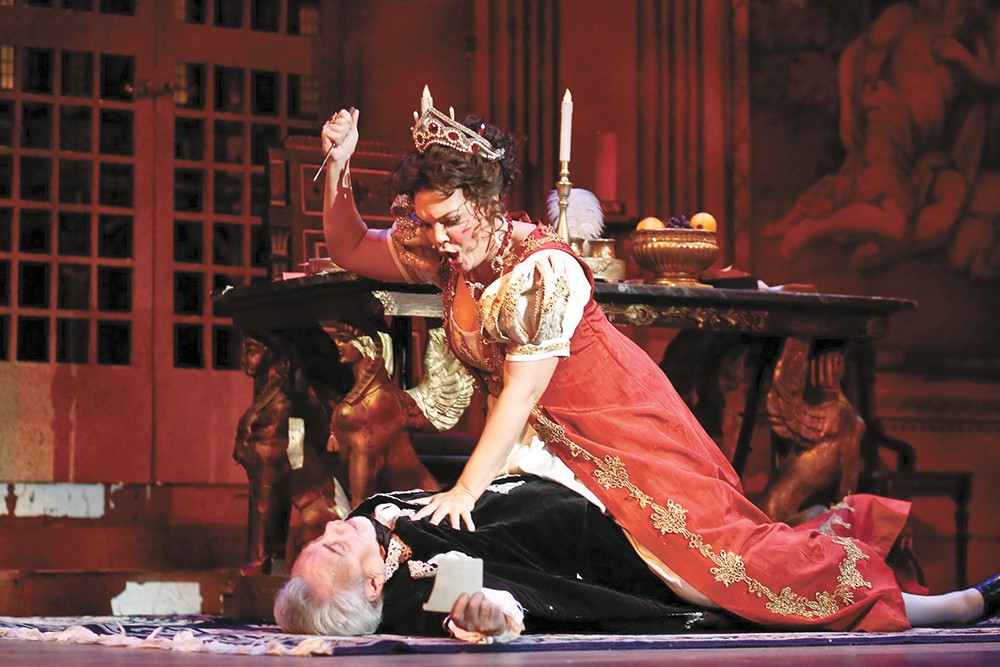 Jill and Jake Gardner, husband and wife offstage, play opposite each other in Tosca.

Absolutely and unreservedly despises him.

Scarpia, you see, is Rome's scheming, avaricious chief of police during a time of suspicion and factionalization, and he's determined to possess the famed singer regardless of whether or not his desire is reciprocated. Tosca's real affections, however, are reserved for the painter Mario Cavaradossi. This naturally makes Cavaradossi a target of Scarpia's vengefulness, which in turn causes Tosca to hate him even more.

To put it bluntly, and without wanting to spoil vital plot points of Giacomo Puccini's opera for the uninitiated, Tosca wants Scarpia dead. To the extent that — given a little liberty for contemporary translation — her final words are, "Scarpia, I'll see you in hell!"

For Jill Gardner, things are a little more complicated.

Gardner has flown in from her native North Carolina to perform the titular lead in this weekend's production of Tosca by Opera Coeur d'Alene. Over the span of 12 productions and somewhere north of 50 performances across the country, it has become her signature role. But it's only the fifth production in which the soprano has performed opposite her real-life husband, Jake.

And he's not playing Cavaradossi.

"I often say that, during that rehearsal process, we work a lot of shit out," she says, chuckling.

"The first time Jake and I ever did Tosca together, which was in Rochester, New York, I had a very difficult time. When we left the rehearsal room, I could not separate my emotions with him. We both laugh about it now, but we were out at dinner one night, and we got into a huge fight. I had a difficult time with him controlling me the way that he does within the drama of Tosca."

Since then, they've been able to develop their bitter onstage relationship by drawing on their offstage intimacy.

"Because we're husband and wife playing these very two strong, antagonistic characters, we have a lot of trust established between us. We can take a lot of risks and really up the ante. Because, for me, that's where the real drama is. Scarpia is not just in love, he wants to have me. And he sings about this in one of his arias. It's about the lust for conquest, particularly sexual conquest."

While hating the "mean, calculating dude"

that is her husband's character, Gardner must also manifest a fiery, passionate love for another man — Cavaradossi, the quintessential "renegade artist." He's played here by Roger Honeywell, a tenor with whom Gardner previously performed as a romantic couple in another Opera Coeur d'Alene production of a Puccini opera, La fanciulla del West.
click to enlarge

"Jake and I joke about it, but the really wonderful thing is that Roger and I have a fantastic onstage chemistry together. But that's what acting is all about. As an actor, you bring all of your experience and all of your talent to portray those relationships."

Directed by Kristen Barrett and conducted by Anthony Barrese, this tragic thriller sees its backdrop shifted from the Napoleonic Wars (specifically, the Battle of Marengo) to a more recent period that's meant to evoke an Italy set loosely around the fascist and postwar years.

"I've done several productions with this, shall we say, updated period, and it can really work if you have really good singing actors — which we do for this production," says Gardner. "The beauty of a traditional production of Tosca is that it has such a quality of over-the-top melodrama, which I also love. When we update the production, we tend to work within a completely different kind of style, and for a piece like Tosca, that can have its own rewards."

But the modernized set and costuming is largely a cosmetic change. The work's famous arias like "E lucevan le stelle" ["And the stars were shining"] and its strong theatricality aren't going anywhere — primarily because, according to Gardner, Puccini came as close to perfection with Tosca as one can get.

"The music of Tosca is just bar none. What is so perfect about this piece is how the music aligns with the drama. It's perfect from the opening chords," she says. "In the end, [Puccini] composed in such a way that it goes straight into your heart. If you've not experienced an opera, this is the best one to see for the first time. This is one of those operas that will blow your mind." ♦