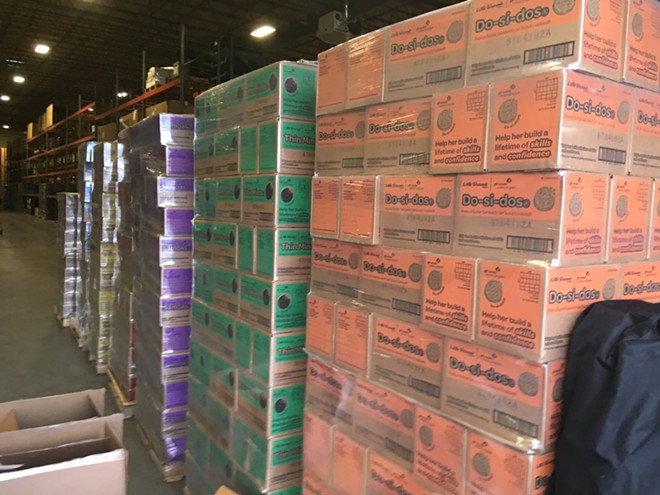 Girl Scouts of Eastern Washington and Northern Idaho photo
Hundreds of thousands of boxes of Girl Scout cookies are waiting in warehouses until it's safe for girls to sell and deliver them in the Inland Northwest.
Girl Scout cookies come to the Pacific Northwest pretty late compared to the rest of the country.

Right around the end of February and beginning of March, after many of the other 110 nationwide councils have finished their sales, the Girl Scouts of Eastern Washington and North Idaho start knocking on doors, hitting up their parents' coworkers, and setting up booths in front of grocery stores to sell boxes of cookies.

It's something that the organization touts as building entrepreneurship in girls, and it's also the main funding mechanism for activities.

In fact, for the Council of Eastern Washington and North Idaho, which covers all of Washington east of the Cascades and Idaho north of Moscow, cookie sales bring in 70 percent of annual revenues, says council CEO Brian Newberry.

But this year, just as girls were ready to start getting the boxes that their customers had preordered, and which they personally had ordered extras of to sell in front of stores and reach their goals, the coronavirus started spreading in the community.

With massive shutdowns of restaurant and beverage locations, and health officials in various counties warning people to avoid contacting lots of others in the community, Newberry was forced to make a tough call: cookies have to be put on hold.

That means about 600,000 boxes of cookies are now sitting in warehouses in Spokane and the Tri-Cities, waiting for the time when distribution seems healthy and feasible for troops.

Girl Scouts courtesy photo
Some quick math shows that's at least $3 million in delicious Thin Mints, Samoas, and even a new cookie called Lemon-ups, that aren't going to be enjoyed yet. More importantly, that revenue collected upon delivery of the cookies won't be available yet for the various summer camps, day camps, and STEM programming the council puts on, not to mention activities the cookies fund for individual troops.

"I wasn’t here in 1933 when our council opened, but it’s not a far leap to say depending on how things turn out — we don't know, the last chapter of this story hasn't been written — but today, March 19th, is one of the most dire challenges our council has faced," Newberry says. "We're really in a bind right now."

Girls are still able to sell their cookies online, but they won't be able to deliver to customers who preordered for at least two weeks, says Renee Smock, chief mission delivery officer for the local council.

"Our goal is to get them out to girls in a few weeks to distribute the ones that were preordered by customers," Smock says. "If not in two weeks, as soon as our community health situation improves so we can distribute the cookies."

The council wants to reassure customers who preordered and who are anxiously awaiting their Thin Mints that they will definitely get their cookies, she says. It will just be later.

But the bulk of sales are achieved through booth sales, when girls set up outside shopping centers and grocery stores and catch people on their way in to ask them if they'd like to buy some, Newberry says.

"I’m certainly not winning any CEO-of-the-year awards right now ... [but] girl safety is our number one priority," Newberry says. "We’re hoping down the road, the conditions will warrant us to do it."

Last year, the Inland Northwest council was number three out of the 111 total councils in the country in their ability to deliver cookies, Newberry says.

"We’ve just never had a torpedo at our revenue stream like this in so dramatic a fashion," he says. "Our girls are counting on this."

In many other ways, the council has had a great couple of years, Newberry says, including growing its membership to 3,500 girl scouts across the council, and 1,500 volunteers.

"We were green in membership and revenue, and then this silent virus came up and changed all of our lives," Newberry says.

But he points to the strength demonstrated by Girl Scouts founder Juliette Gordon Low, who started the organization in 1912, eight years before women could even vote in the United States.

She once said, "The work of today is the history of tomorrow, and we are its makers."

"Juliette Gordon Low was a tough lady," Newberry says. "We're just hoping we can weather this, and again, Girl Scouts can have sunshine tomorrow."