Just for the Hemp of It

The Confederated Tribes of the Colville Reservation are leading the way, growing some of the first industrial hemp in Washington

Samantha Wohlfeil
The first legal hemp plants are growing on the Colville Reservation.

Below the shrub-steppe hills that hug the southern border of the Colville Reservation, situated between golden fields of grain, 60 acres of bright green hemp plants fan their leaves to collect sunlight along the Columbia River.

The cannabis plants, unlike their cousin strains sold for medicinal and recreational purposes, have next to no presence of the psychoactive compound THC, but can be used in thousands of ways: Fibers can be used for clothing and building supplies, seeds can be used for health food items and cosmetics, and some research has shown that parts of the plant can even be used for the type of energy storage used to power electric vehicles.

The crop is among the first permitted under Washington state's Industrial Hemp Research Pilot program, and the first on tribal land.

Leadership and staff who work for the 12 Confederated Tribes of the Colville Reservation are hopeful that the pilot crop will lead to increased revenue for their members, and create jobs in an area where timber harvesting has lagged in recent years.

A few years ago, Tribal Chairman Michael Marchand returned from conferences where legalization of marijuana in Indian Country was among the hot topics. Having grown up farming himself, and later getting a Ph.D. in forestry, Marchand saw that the combines and equipment used to farm cannabis were very familiar.

"We're in big wheat country here in Eastern Washington, so it seems like a good fit," Marchand says, sitting in the tribes' administrative building in Nespelem, less than 20 miles north of Grand Coulee Dam. "We have land, we have sun, we have water, we also have power too, so we have all the ingredients here."

With the 2014 Farm Bill, Congress cleared the way for industrial hemp crops by carving a narrow niche in the law for research. The Confederated Tribes also worked with their lawyers to update tribal code so by the time the Washington State Legislature allowed the industrial hemp pilot program in 2016, everything would be ready to get the first research crop in the ground.

The tribes may have a head start on the other four growers licensed through the state Department of Agriculture this year, partly because they have so many types of experts already working on similar issues under one agency, Marchand says.

"It's kind of a rare combination that any group would have all this expertise under one roof, so that gives us an advantage," Marchand says. "We're always looking for businesses where our tribe has an advantage over other people."

But even getting the seeds to the nearly 1.5-million-acre reservation was a massive undertaking, explains Jackie Richter, who manages the tribes' conservation district and agriculture development. (She's also now the "chief of hemp," Marchand jokes.)

"The state is kind of different, because they want you to have certified seed, and it has to go through them, but you have to find the seed and import it yourself," Richter says.

By the time Washington announced that permits were available for the first legal hemp growers this May, there were next to no seeds to be found, Richter says. Because you typically want to plant hemp by the first of June, sources in Canada and other countries were no longer available.

That's where hemp consultant Doug Fine came in. Fine, who advocates for hemp nationally, is the author of the book Hemp Bound, and is a hemp farmer himself. He helped connect the tribes with a source in the Czech Republic.

After working with the Drug Enforcement Agency through the state Department of Agriculture — obtaining multiple permits and certificates for the tribe and their exporter at the Czech company Hempoint, and after a snafu when the seeds arrived at the Port of Seattle without their paperwork — the tribes finally got their seeds. They had to plant them the same day they arrived, July 9, per DEA rules.

"The Colville tribal effort to successfully get hemp in the ground is one of the most monumental success stories I've seen to date of any kind, let alone that it's the first time in Indian Country," Fine says.

Due to the late planting, the crop is still pushing its way upward, with some plants only a few inches tall as of early August, but others are already more than a foot in height, and will continue to grow.

The first harvest will likely happen sometime in October, and the tribes, which have the only grower/processor combination license in the state so far, will have the chance to process the seeds and fiber on site if they want to. 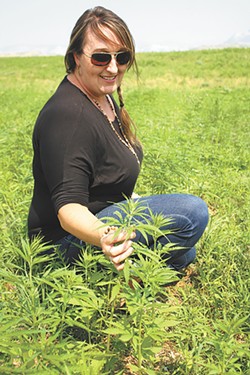 'AND DEFINITELY NO KETCHUP'

While hemp offers the chance to create many different products and create jobs, there are limitations to the research the tribes will be allowed to do amid an evolving regulatory framework at the state and federal levels.

Technically, the plants are still classified as illegal under the Controlled Substances Act, but the limited exemption in the 2014 Farm Bill allows for research crops that are grown in partnership with a state or university.

A federal judge held that the state where the project takes place must have legalized hemp growing first, after the Menominee Indian Tribe tried to grow hemp and federal agents seized their plants. The sovereign nation argued that it should be allowed to partner with its own college under the new rules, but because Wisconsin had not yet legalized hemp growing, the judge held that the feds were within their bounds to confiscate the plants in 2015.

"It's crazy that resources were expended to stop an economic development program in an area that greatly needed it," Fine says.

Luckily for the plants on the Colville Reservation, the legal framework here is in place, he says.

"By joining a state program, this tribe is unambiguously in sync with all laws," Fine says. "This is such a huge head start for [the] Colville [tribes]. The learning curve of everything the Colville project will have dialed in after this season is vast."

Still, there are limits under Washington's law. In a state where growing and processing medicinal and recreational cannabis into products with THC and cannabidiol (CBD) is allowed, Washington state rules prevent hemp growers under the pilot program from studying or using the flower of the plant, where CBD is harvested. While hemp has only 0.3 percent or less of the psychoactive compound THC, it can be high in CBD, which does not get you high but has many uses.

The seeds and fibers may be used in myriad ways, but the flower is really where a lot of potential to market the plant comes in, says Fine, who argues that Washington state policy not to allow that research is just wrong.

"In agriculture, imagine all the different things that tomatoes can be, from salad tomatoes to tomato sauce to sun-dried tomatoes," Fine says.

Now imagine that there were rules saying you could only sun-dry tomatoes, but not sell fresh mini-tomatoes, Fine says.

"And definitely no ketchup," Richter (the "chief of hemp") chimes in, "you know, 'cause that's the most lucrative part of tomatoes."

Also, the tribes will again have to import seeds next year if they want to grow another crop, as their seeds this year won't be "eligible to produce certified seed according to WSDA rules," says Mike Louisell, public information officer for WSDA.

Despite the current pilot program rules, which could change in the future, there will still be plenty of applications for the plants, Richter says.

The tribes, who hope to get their crop certified organic in the future, are using no-till, no-spray methods this year. This crop won't be allowed to be used for human consumption, as food-grade permits will take the tribes some time to get, but there are possibilities of using parts of the plants for animal bedding, protein meal that can be fed to animals that people don't eat (people are marketing dog biscuits with CBD in them, Fine says), oil and more.

While they're not allowed to commercially sell the product, the tribes can conduct research on the "marketability" of the products, which means they can still swap parts of the plants for money, Fine says.

"We're going to have a lot of acreage in the ground ready to go as that industry develops," Richter says. "We could be the processors, all in one, here on the reservation. That's what we're excited about. We're excited about getting individual tribal members the ability to grow their own, and market their own crop as well." ♦