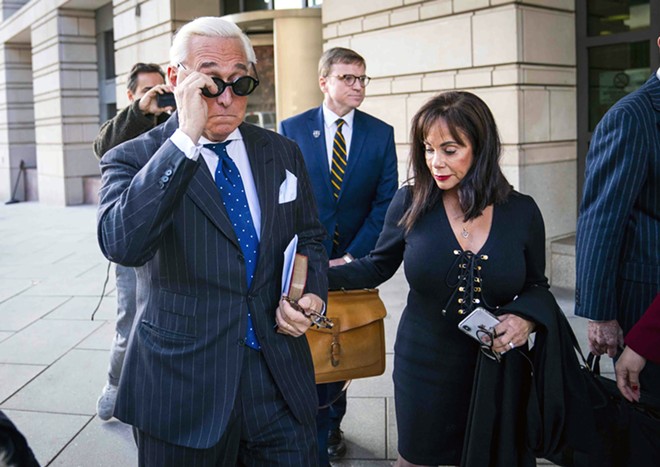 Doug Mills/The New York Times
Roger Stone, accompanied by his wife, Nydia Stone, leaves federal court in Washington on Nov. 14, 2019, after being convicted of seven felonies for obstructing a congressional inquiry, lying to investigators under oath and trying to block the testimony of a witness. The Justice Department will back off its sentencing recommendation for Stone, President Donald Trump’s former campaign adviser and longtime friend, a senior department official said Tuesday, Feb. 11, 2020.
By Katie Benner and Sharon LaFraniere
The New York Times Company

The highly unusual move prompted one of the government’s key prosecutors to resign and another to withdraw from the case. It came after federal prosecutors in Washington asked a judge late Monday to sentence Stone to seven to nine years in prison for trying to sabotage a congressional investigation that threatened Trump and the president criticized their recommendation on Twitter as “horrible and very unfair.”

As he did after a jury speedily convicted Stone on seven felony charges in November, Trump attacked federal law enforcement officials, saying “the real crimes were on the other side.”

The development was a tumultuous turn in one of the most high-profile cases brought by the special counsel, Robert Mueller, whose investigation of Russian interference in the 2016 election cast a lengthy shadow over Trump’s presidency. Disagreements between U.S. attorneys and their Justice Department superiors rarely burst into public view, especially in criminal cases that have commanded the public spotlight for months.

Hours after the Justice Department said that it would lower Stone’s guidelines, a prosecutor on the case, Jonathan Kravis, told the court he had resigned “and therefore no longer represents the government in this matter.”

And a member of Mueller’s team who helped lead the prosecution of Stone, Aaron Zelinsky, withdrew from the case. He also resigned from a special assignment with the U.S. attorney’s office in Washington, though he will continue to work for the Justice Department in Baltimore.

Stone, 67, was convicted in November of obstructing an investigation by the House Intelligence Committee into Russian meddling in the 2016 election, lying to investigators under oath and trying to block the testimony of a witness.

Rep. Adam Schiff, the California Democrat who chairs the House committee, said that if the president intervened in any way to reverse the decision of career prosecutors, it would be “a blatant abuse of power.”

The Justice Department was expected to revise its sentencing memorandum in a court filing later Tuesday. Judge Amy Berman Jackson of the Federal District Court in Washington is scheduled to sentence Stone on Feb. 20.